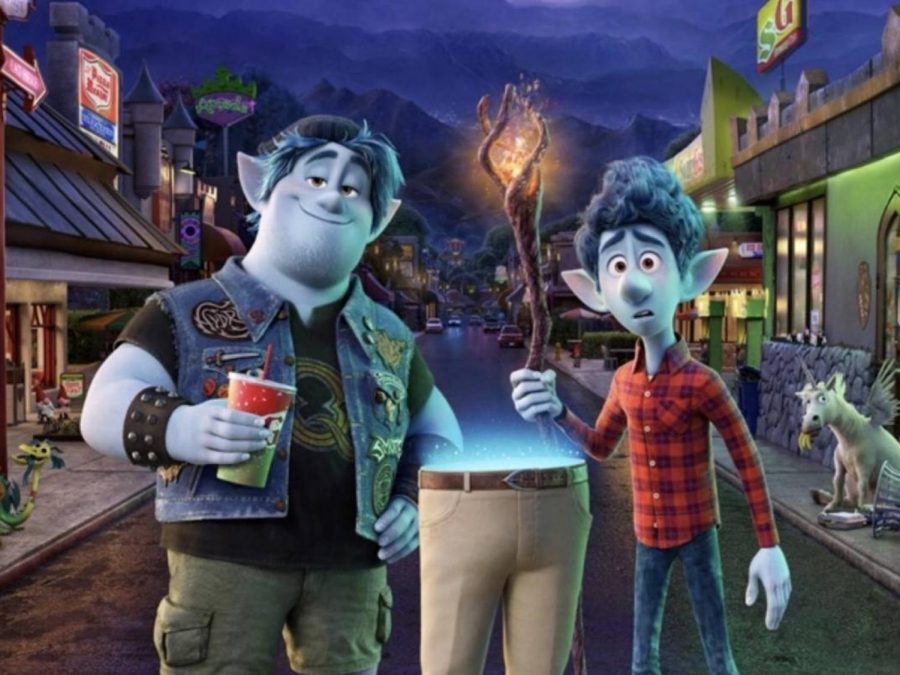 Brothers Ian and Barley embark on a magical journey with the lower half of their father, following stereotype after stereotype to fulfill the plot.

Disney-Pixar’s latest animated film “Onward” debuted on Disney+ April 3 after a short-lived premiere due to the closure of many theaters caused by the COVID-19 pandemic.

According to Forbes, “Onward” only made $39 million in box office sales, scoring Pixar’s lowest opening ever in terms of tickets sold. This makes the new animated film as unpopular as Pixar’s other box-release failure, “The Good Dinosaur” — part of this can be attributed to COVID-19 fears, but none of the other movies that ran that week suffered as dramatically as “Onward.”

The reason “Onward” did not bring in box office sales was not because of the pandemic, but because the movie itself was simply not that great.

Let me explain: the premise of “Onward” is two brothers, Ian and Barley, trying to find a way to bring back their father, who is only present from the waist down due to a failed spell, and discovering magic along the way.

The movie begins with what is called “world-building”; this Pixar universe is made up of mythical creatures such as unicorns, centaurs, cyclops, elves and more.

However, the majority of the movie takes place in a modern and unmagical time. This is the place from which the filmmakers draw most of their repetitive gags: the clash of fantastical creatures in a modern-day setting.

These gags failed to deliver, and I did not laugh as much as I might have with better writing. Sure, I was amused at first, but nothing really stood out to me about the beings of this universe.

Since the film mainly focused on setting the scene and creating this world, the entire plot of the movie was completely lost.

When viewers finally grasp the plot, it is not only bland but extremely predictable, following the precedent of other Disney coming-of-age films. What’s missing from this film is Pixar’s reputed and unique sequences, seen in movies like “Up” and “Wall-E.”

Honestly, it took me some effort to finish watching the movie since the action drags on slowly and I guessed everything that would happen before it did.

Another thing that did not work at all was the half-missing father character. The animated pair of pants just served as an overused running gag. Watching the brothers trying to communicate with the legs often made me cringe.

It was difficult for me to connect to this “character,” as he’s simply a pair of legs. The lack of character made it hard for me to become emotionally invested in Ian and Barley’s plight to reunite with their father for a day.

One of the only things that works well in this film is the brotherly chemistry of Tom Holland and Chris Pratt, who voice Ian and Barley, respectively.

Holland and Pratt bring a great dynamic to the movie, successfully selling the caricature of a younger, shyer brother and a brash, older brother.

Knowing the brotherly relationship between the two voice actors helps increase the sense of believability. I found myself picturing the two men in a recording studio playfully bouncing lines off one another, which enhanced my movie-watching experience tenfold.

“It’s not easy being a new parent – my girlfriend’s daughter got me pulling my hair out, okay?” Waithe’s character says, instead of blatantly yelling “I AM A LESBIAN!”

The offhandedness in which the line is delivered normalizes same-sex parents, which in turn teaches kids to accept that some kids have two moms or two dads.

It is extremely heartening how far society has come; a decade ago, it would be very unlikely to see any representation of the LGBTQ+ community in a movie, much less in a kids film. That single, short line made me feel inexplicably happy.

Overall, Pixar’s “Onward” is a lackluster film with an extremely predictable storyline, only saved by the talents of the voice actors Tom Holland and Chris Pratt. Sure, I finished the movie, but I will not bother rewatching it like I do with some of the better Pixar films.