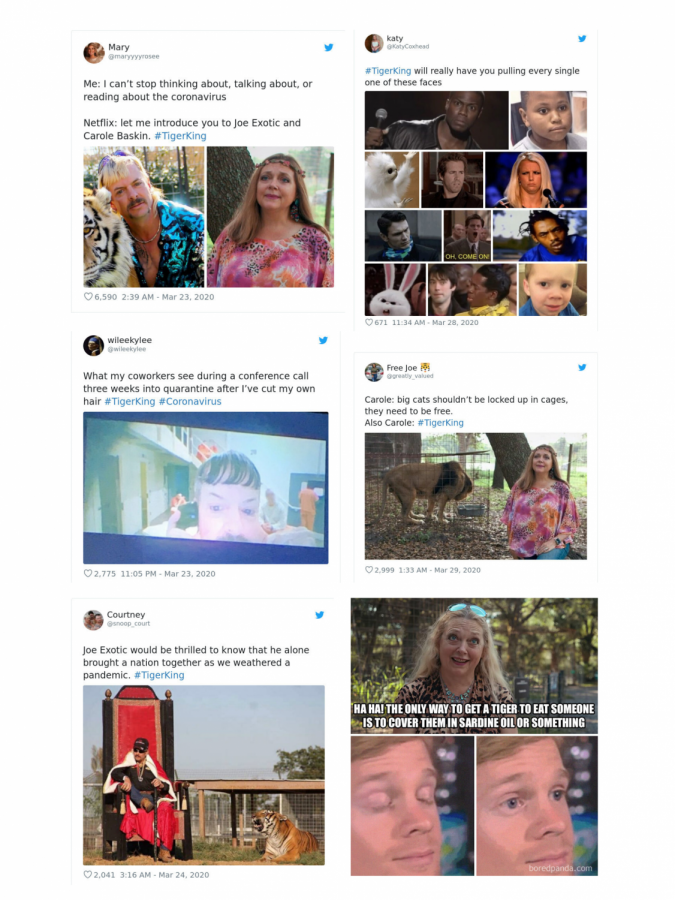 It has been long overdue – the hype is almost gone, the memes have died down and the search for Carole Baskin’s “missing” husband has gone underway. Despite this, I have only now processed the infamous Netflix docuseries “Tiger King.”

Earning its title as 2020’s most jaw-dropping TV show, the docuseries has shaken me up and turned my perspective on America (as if it wasn’t skewed already).

“Tiger King” was released on March 12 with seven episodes covering self-proclaimed “Tiger King,” Joe Exotic, and the wild experience of owning exotic cats in the U.S. Exotic is revealed to be a gun-toting, polygamous, gay, country-singing big cat owner — all of which play into the true storyline that he was involved in a plot to kill Carole Baskin, another fellow exotic cat owner.

Carole Baskin is another individual who reveals herself to be anything but boring; she lobbied the U.S. government to pass the Big Cat Public Safety Act (despite literally putting her tigers in cages), took photos with her third husband wrapped in a leash and, most importantly, was suspected of feeding her first husband to her cats.

The show spurred an insane number of memes and BuzzFeed commentary articles, all of which convinced me to try the show. This show was definitely a prime example of consuming entertainment during shelter-in-place: one person starts watching because there’s just too much time and it blows up, triggering everyone else to watch it because hey, we have the time!

From the very beginning, I had to remind myself to close my mouth because my jaw was unhinged in disbelief the entire time. Even the prelude was incredible — the director only found this story while filming content about people who owned large snakes. It was difficult to remember that this show actually happened, and it wasn’t just a fantastical series about a fictional world.

Some mind blowing scenes include Exotic, or other big cat owners, frolicking with gigantic tigers or feeding baby tigers in human baby cribs. It felt absurd to watch such natural interactions in unnatural circumstances. Even as someone who is not involved in animal rights activism, I was troubled by the fact that these animals were in the U.S. in the first place. I’m sure activists or extremely concerned individuals would have a difficult time stomaching these scenes.

Watching “Tiger King” brought this thought: the juxtaposition of different parts of the U.S. portrayed in this series was daunting; while there were small protests and movements, there were no significant efforts to remove roadside zoos with exotic animals by communities in the South. I would argue that in California, even bringing up such an attraction would cause uproar.

In addition, the characters were so multifaceted that it was difficult to say who was truly in the wrong or in the right. Exotic might have made explicitly inappropriate videos about Carole Baskin, but Baskin slandered Exotic on the internet.

It is also difficult to say if Exotic has deserved the jail time he’s received for plotting and attempting to kill Baskin; there are so many confounding variables to take into consideration with the great deal of shady characters surrounding the big cat community.

It is pretty clear how this show became so popular — with the craziness COVID-19 has brought into our lives, the need for proof that this life is not a simulation has led people to find the most bizarre example of reality possible. It proves that even without a pandemic, the world is truly an outrageous place to exist in.

I was reminded that entertainment needs to be a learning experience about the people around us; I never would’ve known about people owning exotic animals in the South without this show.

“Tiger King” left me in awe of the life that we are all living and the world we exist in. It gave me content to talk to other Netflix binge-watchers and I was able to understand the memes on BuzzFeed. For these reasons, I believe “Tiger King” is a worth-it watch.

However, I don’t believe that people who are sensitive to animal rights should watch because concern may cover the humor and absurdity of the show. It is not meant to be an ad campaign for PETA nor meant to bash the organization and its supporters; it is simply a well-made docuseries to inform the public. If you are okay with that, you will not regret watching this show.

Try it — you know you have nothing better to do.