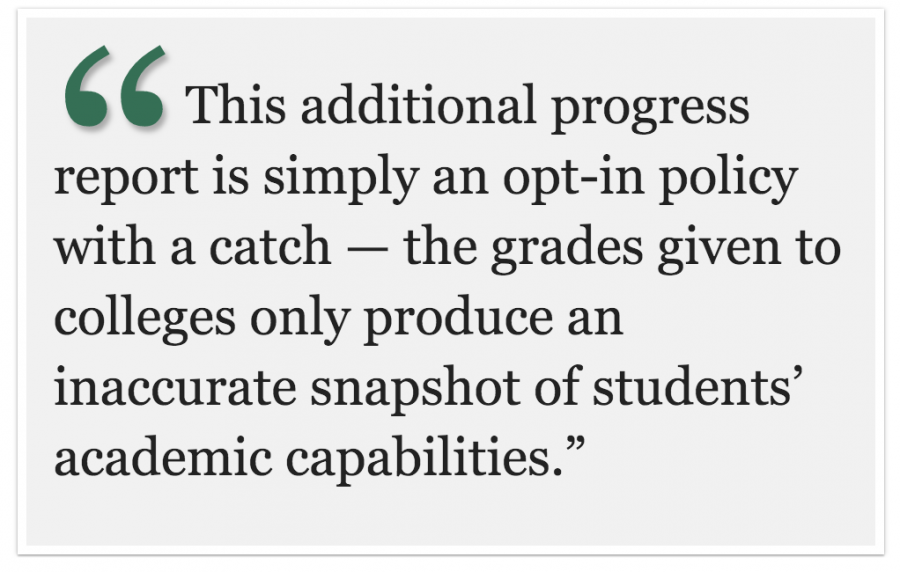 This additional progress report is simply an opt-in policy with a catch — the grades given to colleges only produce an inaccurate snapshot of students’ academic capabilities.

What the admission counselors do not know are the reasons behind a student’s decision to not submit a progress report.  In the weeks leading up to the school closure, if students became sick and were forced to miss school, they might have missed tests or were unable to turn in their homework.  Even if students were in the midst of making up missed tests and homework assignments, teachers might have given them zeros in the gradebook which could have drastically lowered the student’s grade.

And even once students submit makeup work because they were sick, teachers may not have gotten around to inputting the grades in School Loop or Schoology.  Similarly, teachers may not have finished grading tests that could raise a student’s grades.  In AP classes such as AP Calculus, AP U.S. History and AP Biology, there are usually only three midterms per semester and just one midterm in the gradebook could dramatically raise a student’s grade.

Colleges are perfectly happy accepting pass/fail grades in these turbulent times, according to The World University Rankings, as more than 150 colleges themselves moved to a strictly pass/fail grading system.  According to the Santa Clara Office of Education, UCs and CSUs are both more than willing to not penalize students because of pass/fail grades on their transcripts.

There is absolutely no need for the board to add the progress report option, as it only presents an inaccurate representation of a student’s performance during semester.