The toxic reality of hyperpartisanship

How even a pandemic is political 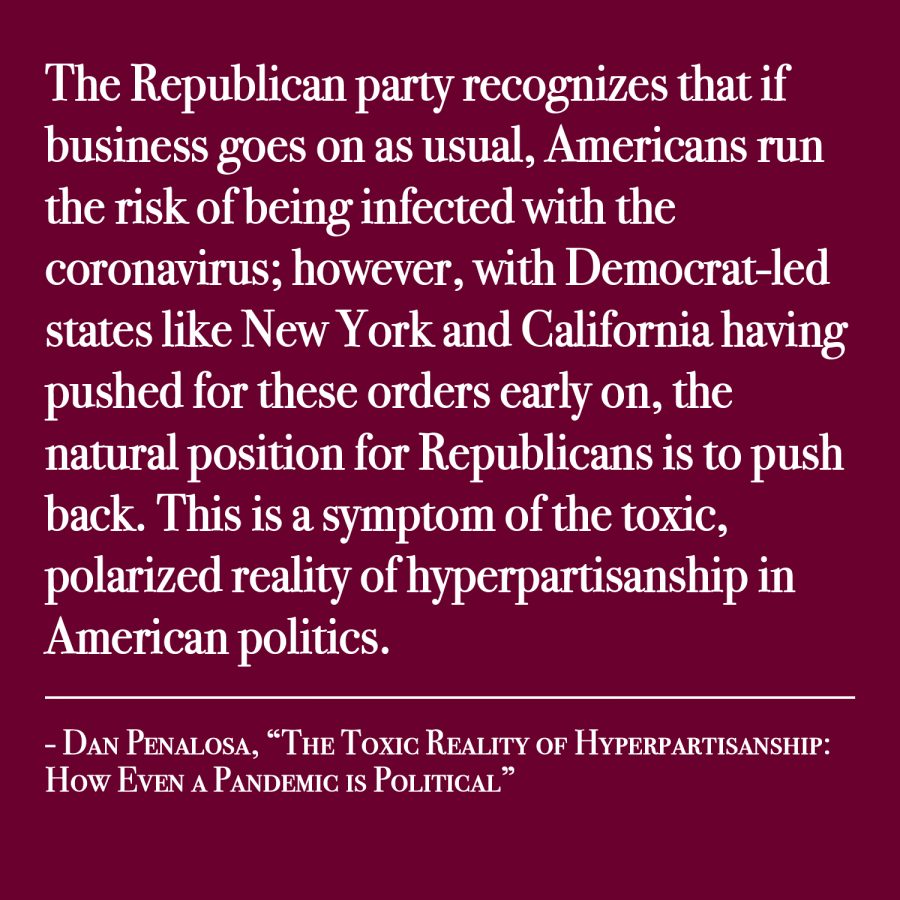 President Trump is a known climate change denier, xenophobe and misogynist. And yet, the Republican Party still backs him. In fact, he isn’t anywhere near losing his party’s support; according to a recent poll conducted by Gallup, his approval ratings are almost at an all-time high among Republicans at ninety-two percent.

In the middle of a global pandemic, he’s called on his party to gather in large crowds and protest the stay-at-home orders across the nation, with tweets to “liberate” states like Minnesota and Michigan.

The Republican party recognizes that if business goes on as usual, Americans run the risk of being infected with the coronavirus; however, with Democrat-led states like New York and California having pushed for these orders early on, the natural position for Republicans is to push back. This is a symptom of the toxic, polarized reality of hyperpartisanship in American politics.

A hyperpartisan state is a country where multiple political parties are polarized against each other and disagree on just about everything. In American politics, if one party supports a bill, the other immediately acts against it.

With the partisan squabbling over every single issue, Congress is deadlocked and unable to pass any legislation.

In issues that clearly aren’t political — LGBTQ+ rights, feminism and climate change being the most prominent — if one party takes a stance, the other party takes the opposite stance.

There are multiple examples of hyperpartisanship in Congress. For starters, there is the filibuster, which is little more than a loophole that blocks progress. In order to pass a bill, the Senate must first have a debate in which individual Senators speak for or against the bill. A Senator is able to give a speech that lasts for hours in order to delay or prevent a decision being made on the bill. A single senator can stop the Congress from voting on a bill.

The topic of the speech doesn’t have to be related to the bill at all. For example, as Senator Ted Cruz was filibustering a spending bill that included funds for Obamacare, he was running out of topics related to the bill itself. Instead of being rational and ending the filibuster, he stalled and went on unrelated tangents ranging from the show Duck Dynasty to reading Dr. Seuss’s Green Eggs and Ham on national television.

The only way to end a filibuster is with a cloture motion, which requires that a three-fifths majority of senators agree to end debate and vote on the bill. This means that a minority party with at least 40 seats in the senate can block a vote. With enough senators, a party can completely freeze Congress for 6 years.

The worst session was in 1995 to 1996 when 82 cloture motions were filed and cloture was invoked only 9 times. That’s a success rate of about 11 percent.

Each passing election, general or midterm, it gets harder for parties to make progress and Congress to function.

Even if a few moderate members of the minority party do compromise, if a bill passes the filibuster threshold, its final passage depends on the actions of the President; it requires a two-thirds majority in both houses to override a presidential veto.

First a bill has to get consensus from an entire party to get a simple majority, which is hard enough. Then, they have to sway senators of the opposing party — seven to 13 — to even get the bill to a vote in the senate.

On top of that, if the President vetoes, they have to get a two-thirds majority from both houses of Congress, meaning there would have to be concessions for certain parts of the bill in order for it to attract full bipartisan support.

For example, the recent two-trillion dollar stimulus package does a lot for employees’ paid sick leave, but only for companies with between 50 and 500 employees. The original plan required all employers to provide paid sick leave.

This was not the only time that Republican leaders refused to cooperate with Obama. When Obama nominated Merrick Garland to be a Supreme Court justice, Republicans refused to consider the nomination, with Mitch McConnell stating that he wouldn’t allow a justice to be appointed during an election year.

Obama nominated Garland because he was a moderate judge rather than a far leftist, according to the Washington Post.  Yet, McConnell refused to even hold a hearing for Garland and instead left the Supreme Court seat empty for 422 days— the longest vacancy in the history of the Supreme Court.

The issue of hyperpartisanship has been around for as long as the parties have existed, and it’s only getting worse with time. Whatever the solution, it needs to be implemented as soon as possible, before this already broken situation gets worse. A congress strictly divided along party lines doesn’t work, and the tools used to widen this gap — like the filibuster — should be completely erased.