“Goosebumps” is a great Halloween treat 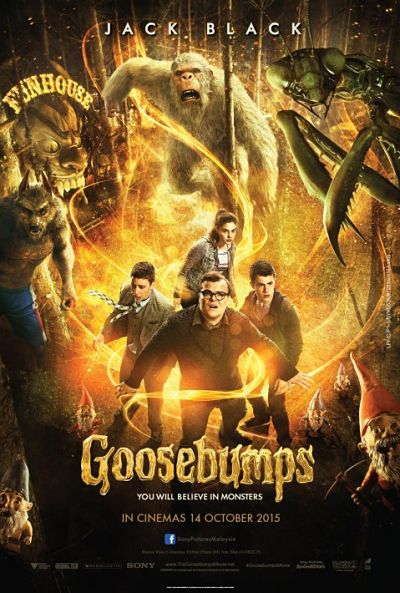 Goosebumps” initially seemed like a cheap “action” movie with kid-sized horror — certainly not worth watching.

However, I was pleasantly surprised by the humorous and action-filled movie adaptation of R.L. Stine’s series.

“Goosebumps” follows the new-kid-in-town, Zach (Dylan Minnette), as he meets the cute girl next door, Hannah (Odeya Rush) and her creepy father, R.L. Stine (Jack Black), as well as the awkward but lovable sidekick-nerd, Champ (Ryan Lee). The group then proceeds to face all of Stine’s monsters, after accidentally  releasing them from their book-bound prisons.

The movie undertakes relating to youth and presenting Stine’s horror and style in an unorthodox manner, but delivers fairly well.

Despite the intensity of the novels, much of the movie is made lighter with Black’s absurdly intense performance, Minnette sarcastic quips and the ironic humor. Even the occasional “dad joke” makes an appearance. Several plot problems were also presented with the addition of a romantic subplot, it was rather unnecessary and very rushed, as was the reasoning as to why or how the monsters came to being from words.

However, the stunning effects, monster-after-monster action and the completely unexpected twists keep the audience interested and on edge for the hour and 43 minutes.

Overall, an avid fan of the series may not be completely pleased with the mildness of the movie, but it is most definitely worth the watch for the average movie-goer looking for some family fun or a lighthearted Halloween movie.