U.S. response to COVID-19 leaves people slipping through the gaps

Reading the fine print, the package isn’t enough for plenty of Americans 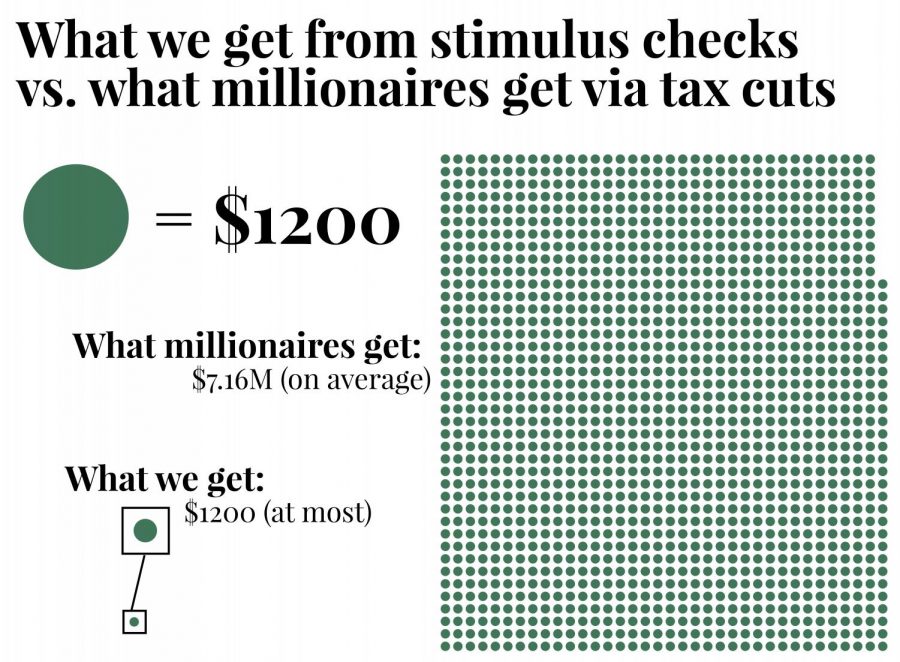 As seen in the infographic above, millionaires earn - on average - 430 times as much as ordinary American citizens.

A month ago, the bipartisan stimulus package grabbed national headlines. The Families First Coronavirus Response Act (FFCRA) guaranteed paid sick leave and free testing, while the Coronavirus Aid, Relief, and Economic Security Act (CARES) was hailed as the largest relief bill in American history as the bill expanded unemployment benefits to individuals impacted by the coronavirus.

The government also gave “economic impact payments” — stimulus checks based off of last year’s taxes— to Americans in need of cash.

Although these provisions provide some relief, the final package of the FFCRA, CARES, and the stimulus checks still leave plenty to be desired.

“We don’t want people losing their jobs or not having money to live, when they were doing very well just four weeks ago,” President Trump said in a press briefing.

However, that is already happening. Since the payments are based off 2019 taxes (2018 for for those who haven’t filed yet), those who lost their jobs during the pandemic are ineligible for these checks if their income in 2018 or 2019 surpassed the threshold of $99,000 for single adults, and $136,500 for single parents.

Dependents over 16 — most who are high school juniors and seniors — also aren’t eligible for either the child or adult checks. This also includes adults aged 18 to 23, plenty of who are still in college or entering the job market with immense student loan debt.

Even if people do get their checks, this is — at best — a one-time $1,200 payment, which isn’t enough to keep them afloat.

“$1,200 is the average rent for most Americans,” Natalie Foster, co-chair of the Economic Security Project, commented on The Guardian. “The first check is eaten up, and what are they supposed to do after that?”

And in Silicon Valley, the problem is much worse — the average rent in Sunnyvale is $3,016 a month. However, these citizens may not get their checks anytime soon as the checks could arrive as late as mid-August.

But hey, at least people get paid sick leave under the FFCRA, so they can survive. As Vice President Pence put it, “If you’re sick, stay home. You’re not gonna miss a paycheck.”

However, for most Americans, that is not true at all. The original bill would’ve guaranteed that paid sick leave be given to every employee in the country who was affected by COVID-19, directly or not, but the provision that would’ve provided these benefits was gutted in the version that became law.

Section 5102 of the FFCRA entitles “eligible workers” paid sick leave, and extends to individuals unable to work, whether as a result of layoffs or the need to take care of those with COVID-19.

However, in section 5110, the FFCRA clarifies that the paid leave mandate only applies “in the case of a private entity or individual, employs fewer than 500 employees,” and in section 3102 that “the Secretary of Labor shall have the authority … to exclude certain healthcare providers and emergency responders from the definition of eligible employee … and to exempt small businesses with fewer than 50 employees from the requirements.”

This means that people working at large corporations and small businesses aren’t guaranteed paid sick leave, leaving somewhere from 6.8 to 19.6 million Americans without paid sick days, according to the Economic Policy Institute.

Although states like California have laws regarding paid sick leave, other states don’t, meaning whether or not Americans see their next paycheck because they are on sick leave largely depends on where they live.

While a majority of Americans are only getting $1,200 checks and 10 days of sick leave — benefits which some Americans can’t even redeem — the rich are getting millions, thanks to a tax overhaul hidden in the CARES act.

The Joint Commission on Taxation calculated that the tax change would cost around $86 billion this year alone. According to Snopes, the recent tax change results in each of the 43,000 millionaires in the U.S. reaping $1.716 million in tax benefits.

That’s all happening while most of the country gets a one-time $1,200 check that could take months to arrive and some Americans don’t get anything at all.

To put it into perspective, millionaires are getting over 1,430 times as much as the poorest Americans – the ones who need the money most.

The stimulus package doesn’t do nearly enough for everyday Americans, leaving their benefits up to where they live, while the rich thrive off of provisions camouflaged and buried deep in bureaucratic legal text, in hopes that the public won’t see how the system is rigged for the rich.

The masses get — at most — a month’s rent and two weeks’ worth of paid sick leave, whie the rich get tax credits that refunnel millions back into their pockets, in addition to the $1.5 trillion Wall Street got in March.

Instead of actually guaranteeing paid sick leave, the government gutted the program, opting to give the rich a gift and cost taxpayers an estimated $86 billion — for this tax year alone. The $1.5 trillion could have almost canceled student debt, only falling short by about $100 billion.

The problem isn’t that the stimulus package doesn’t help people; it clearly does. It takes pressure off of Americans who would be worrying about getting food on their plate or keeping a roof over their heads.

In reality, the problem is that most people who need help can’t get any, and those who do get some help don’t get enough; meanwhile, the rich – people who don’t need help – are getting even richer, with benefits flooding in at over a thousand-fold that of everyday Americans.

It’s absurd, and America needs to call moves like this out until these kinds of courses of action are reversed.

(Read the full text of the CARES Act here.)