Our flawed legal system: helping police get away with murder 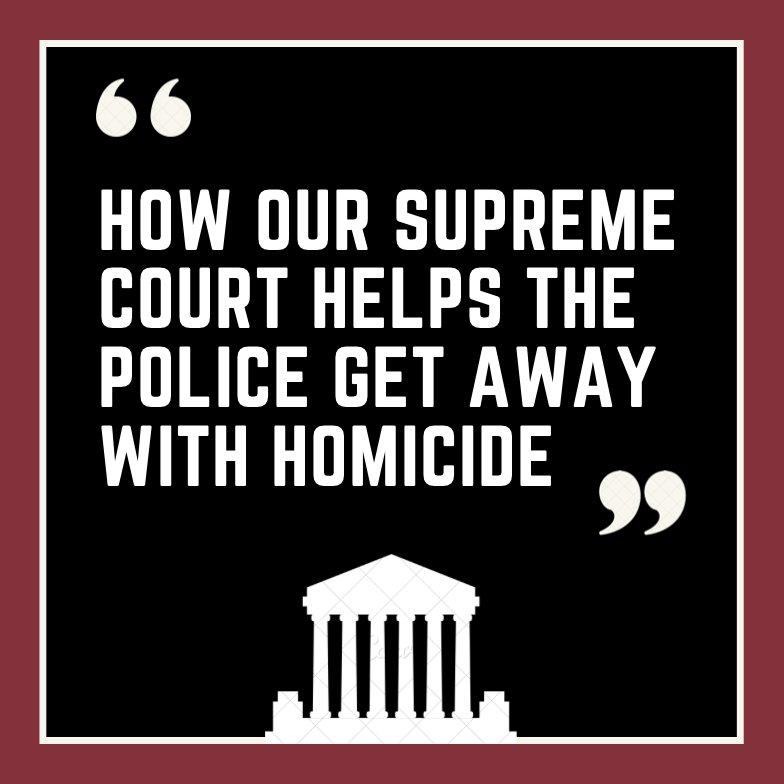 The Supreme Court provides police officers with almost limitless immunity from prosecution for their actions taken on the job.

Nationwide protests and social media outrage led to the arrest of Derek Chauvin, the Minneapolis police officer who knelt on George Floyd’s neck for nearly nine minutes. Even though this is a step towards justice, it lacks the power to influence America’s flawed legal system.

The senseless killing of Floyd cast light on countless unjustified uses of deadly police force, which caused the deaths of Michael Brown, Tamir Rice and Breonna Taylor, to name a few.

While the list of innocent black lives lost goes on and on, one thing remains constant: almost none of the officers involved in their murders were prosecuted or convicted, despite the presence of strong video evidence against them.

For instance, four officers were seen tackling Eric Garner to the floor and placing him in a chokehold, until he eventually suffocated to death. Although the video footage clearly shows that Garner was unarmed, the police were never indicted, according to ABC News.

While police unions and reluctant juries often protect cops, the Supreme Court was what facilitated a culture of violence and abuse in law enforcement, according to The New York Times. It has eviscerated a fundamental civil rights law— ‘qualified immunity’—in order to provide police officers with almost limitless immunity from prosecution for their actions taken on the job.

The Supreme Court first articulated the notion of qualified immunity in 1967, when the police chief of Miami coined the phrase “when the looting starts, the shooting starts” in hopes of intimidating civil rights protestors. According to The New York Times, the court soon ruled that police officers should not face liability for enforcing the law “in good faith and with probable cause.”

This is not only incredibly unethical, but it also provides prosecutors with an extremely high standard to meet when providing evidence. With the defense of qualified immunity, police officers have prevailed in virtually every case. This negatively affects plaintiffs and prosecutors, since they are required to find precedents for their cases in courts that rarely produce them. Precedents are legal decisions that serve as authoritative rules in future analogous cases, so the lack of them gives the police an even greater advantage.

Qualified immunity has successfully protected police officers accused of all instances of police misconduct, from assault to homicide, according to The New York Times. This is simply ludicrous. Police misconduct itself should be considered a serious crime, and not a way to avoid being charged with murder.

Occasional minor mistakes and errors in judgement are bound to occur, given the level of risk and danger in police officers’ jobs. However, while rare mistakes from humane officers may sometimes be forgiven, far too many officers do not face penalties for severe cases of abuse. In addition, these unjustified uses of force have occurred too many times to give them the benefit of the doubt.

Since 2015, roughly 5,475 Americans have been murdered by the police, according to The Washington Post. Out of all these people, over 1,300 were black, and over 350 were completely unarmed. It is sickening to think that the Supreme Court, an institution with so much power, has allowed officers to get away with killing this many civilians.

Ultimately, there needs to be much more awareness about the unfairness within our legal system, and much more advocacy for change.

With the continuation of national efforts and movements like the ACLU and Amnesty International against this issue, we have the chance to change our legal system for the better. Together, we have the potential to bring justice for all, but it is our job to fight for it, until we are truly equal under the law.