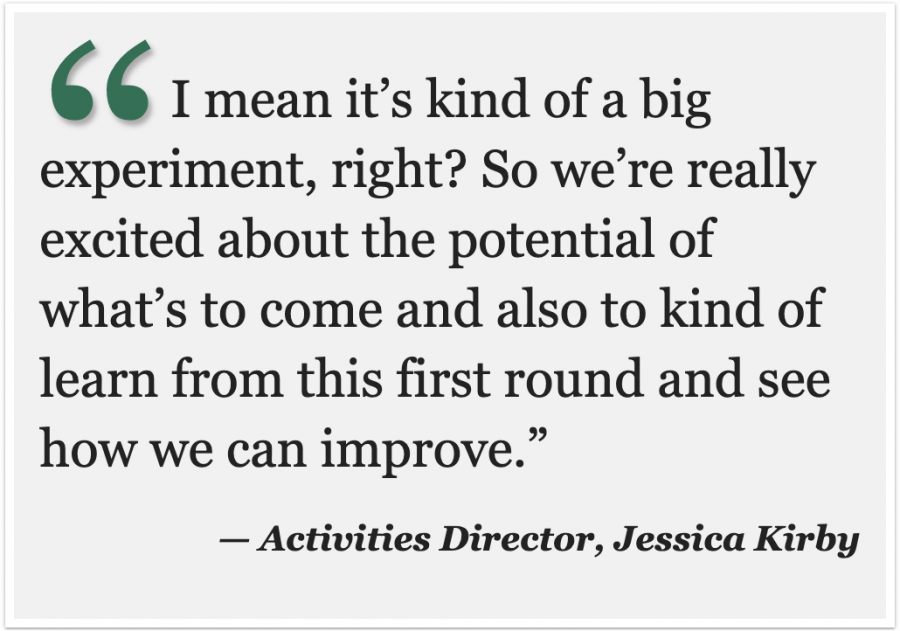 As distance learning continues, ASB is working to keep the Mustang spirit alive through virtual rallies.

The first rally of the school year took place September 16 during the advisory period through a YouTube live stream.

Despite the move to distance learning, ASB was excited to continue hosting rallies, ASB Rally Commissioner Ori Brutman said in a Zoom interview.

Brutman said he was thrilled to see the student body get excited about the rally, which followed the traditional beginning of the year “Aloha” theme, despite it being virtual.

“When we first mentioned having a virtual rally, I was like, ‘how can we make this the best rally?’” Brutman said. “It got me a little emotional because it means a lot that there’s still interest from the school to have this rally and my dream is to do everything that we can to make Homestead students feel safe and feel happy.”

It took ASB Rally Commissioners Rishi Zamvar and Brutman about two weeks to plan the details, figure out participation and finalize the script.  The rally was planned by all five ASB committees, with Zamvar and Brutman taking the lead and MCing the virtual rally, Brutman said.

Although in-person rallies are not an option this year, ASB Rally Commissioner Rishi Zamvar said he is hopeful virtual rallies will still be able to keep the school spirit alive through the screen.

Zamvar said the ASB team is doing its best to keep the rally traditions alive. In particular, Zamvar said, ASB tried to incorporate some of the traditions from in-person rallies, such as the senior walk in, into the virtual rally to mimic the same energy.

“It’s definitely not the same as in-person rallies because there’s a whole other vibe that you get from in-person rallies, but we’re going to try to emulate that to the best of our abilities [with future virtual rallies],” Zamvar said.

With that goal in mind, Brutman said ASB was excited to incorporate interactive games and performances into the virtual rally to make sure everyone was entertained.

A main focus of the planning process was to ensure all students could be involved in the rally, Brutman said.

Both commissioners said they reached out to students with a form asking students and student groups to submit performances to be showcased during the rally.

In addition, Brutman said the rally committee team was grateful to feature multiple dance teams like The Equestriettes, Cheer, Indopak and Krew.

The Equestriettes’ coach, Sara Frausto, said she felt the team was prepared for their first rally performance and that the team was very excited to perform.

“The team lives for rallies,” Frausto said. “It’s why they like to do what they do, so it’s great that we [had] this opportunity.”

HHS Cheer also performed in the rally. Cheerleader and junior Paris Ikeda said the entire team was looking forward to a new type of performance.

“It’s a fun way to make things feel more normal,” Ikeda said. “It’s a different experience from performing in person because we can’t showcase all of our skills through a screen, but it’s a super unique experience.”

While increasing school spirit was the main goal for the rally, it was also useful in helping to welcome new students to Homestead, Brutman said.

“Hosting a virtual rally [was] a chance to integrate school newcomers to the exciting on-campus environment,” Brutman said. “[We wanted to] introduce the new incoming freshmen to what Homestead is like.”

Activities director and resource specialist teacher, Jessica Kirby said in a Zoom interview that she was very pleased with the turn out.

“I think that this is an opportunity for all students to participate,” Kirby said. “I think some students who are extremely sensitive to noise, don’t really like being in crowds … [so] this [was] kind of a unique way to experience school spirit.”

Brutman also expressed how meaningful the rally was to him and stressed the importance of the student body to connect during distance learning.

“The rallies are the best way to virtually connect with the whole student body,” Brutman said. “ … without you guys [students], there is no Homestead … Leadership truly worked as hard as we possibly could to make this event as successful as we could.”

Kirby said this first rally provided valuable insight to ASB that will be useful in planning future rallies.

“I mean it’s kind of a big experiment, right?” Kirby said. “So we’re really excited about the potential of what’s to come and also to kind of learn from this first round and see how we can improve.”