‘The Crown:’ reputation ruiner or entertainment 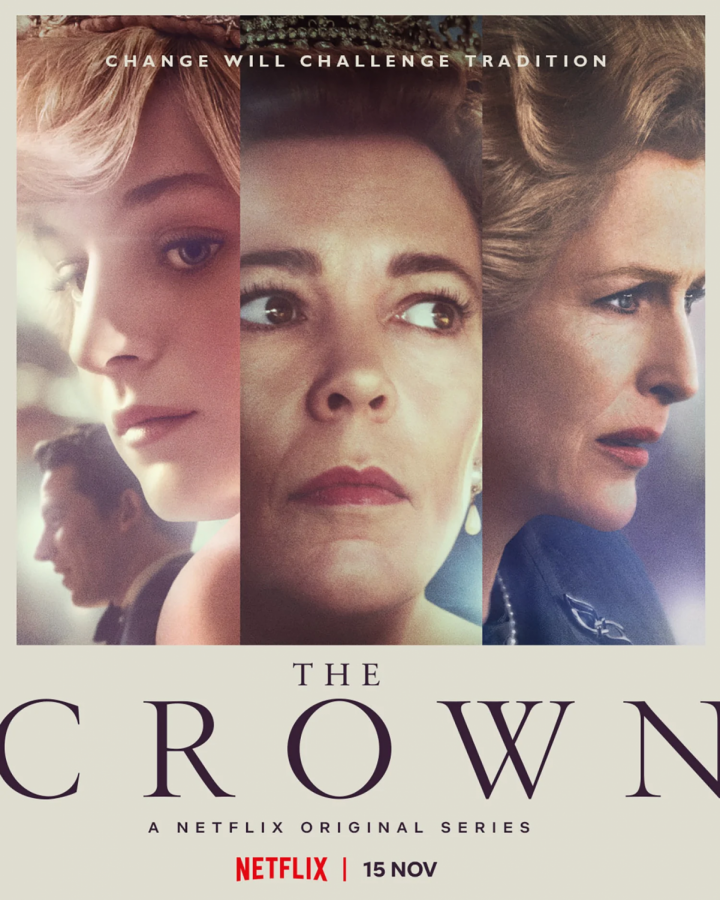 The new season is filled with excitement and three strong female leads dominating the screen.

As a fascinating drama that lets the public have a fictionalized look at what actually happened behind closed palace doors, season four of “The Crown” does not disappoint. The Netflix original premiered on Nov. 15 and I was immediately hooked, mainly because of the portrayal of Princess Diana, played by Emma Corrin.

Corrin takes on a stressful role portraying such an iconic person in history. Regardless, she does an amazing job and truthfully brings Princess Diana to life. Additionally, many look-alike pictures have been found of Corrin wearing similar clothing in the series to the real-life Diana. It was refreshing to see ‘80s fashion in our world of modern leggings and crop tops.

Overall, the cinematography, costumes, plot and script are very engaging throughout the entirety of the fourth installment. There are many evident similarities between how the time period of the series is showcased and how events actually unfolded.

Trends and historical events, such as the British economic recession and Falklands War, contributed to the filmmaking magic, which helps the production feel more authentic.

Diving into the royal family dynamics, the infamous ‘Balmoral Test,’ where members of the royal family judge newcomers, is a humorous addition and it ends up sealing the deal for Diana’s marriage.

Even though the show is based on real events, I found it a little disturbing when Prince Charles (Josh O’Conner), a 29-year-old, is flirting with a 16-year-old girl whom he later on marries.

In episode three, the whole family is shown getting ready for the wedding, and Diana’s iconic wedding dress is featured. It appears to be almost identical to the actual dress Diana wore and is very detailed. However, the wedding itself is not shown, which is disappointing since it is something I was looking forward to seeing.

Charles and Diana’s relationship offers a visual representation of a fictionalized version of the tragedy. The screenwriters depict Prince Charles as an antagonist, showing his extreme roughness towards his wife.

At one point, it becomes blatantly obvious the events are being dramatized. As a viewer, I was given the impression that Prince Charles was continuously cheating on Princess Diana; however, that is not entirely accurate.

He stopped seeing his mistress, Camilla Parker Bowles, right before the wedding, according to NBC News. While keeping a show completely pure from dramatization is impossible since that is what makes it so interesting; however, portraying such an important part of the show incorrectly damages the show’s reputation, creating unnecessary false interpretations.

The way Prince Charles is shown screaming at Princess Diana certainly does not help his already fragile reputation. I am not saying he is the most innocent man and should take no responsibility for the clear downfall of their relationship, but Charles seems to be misunderstood to some extent.

He is basically forced to cut ties with the one person he truly loves, Camilla, and marry someone he doesn’t want to. “The Crown” only shows the negative aspects of him and not the miserable side, which leads to an inaccurate representation. If the screenwriters wanted to show the true story, they needed to get the whole picture.

Keeping all of this in mind, there is nothing to justify cheating on your wife and treating her unfairly. As seen time and time again, Diana struggled mentally and her misery in the marriage is truly shown. It is heartbreaking, at times, to see how she is spoken to and neglected by those around her.

Regardless, O’Conner as Charles is extremely believable and brings a sense of loneliness to the character. He expresses the script in a way that feels representative of the way Prince Charles most likely felt during his marriage to Diana.

Not helping with matters, the married couple turns to the queen (Olivia Colman) multiple times to ask for guidance. However, she is wrapped up in her own duty and lets them work it out themselves.

In this new season, Queen Elizabeth is portrayed as a cold, distant person, which very much differs from past installments where she is shown to be more of a people person. As a fan of the reigning queen, it is disappointing to see the character change so drastically from one season to another. Nevertheless, Coleman does an amazing job and is extremely believable as the admired royal.

Working closely with the queen as prime minister, Margaret Thatcher (Gillian Anderson), also known as the ‘Iron Lady,’ is famous for being strict and mean to others. The series solidifies rumors that Queen Elizabeth and Thatcher did not get along, with rumors fueled even by the queen herself at some point.

In episode 8, the dynamic between the two is really showcased. The queen is handling a situation in Africa that requires the signature of the prime minister, which leads to a series of dramatic events. Anderson reveals many of the quirks Thatcher displays in real life, and does a fantastic job showcasing the prime minister’s coldness.

A lot of controversies have circled around the internet about the consistent inaccuracy of the events shown in the fourth season. It has gotten to the point where Netflix has received requests to add a disclaimer, which states that the show is a work of fiction.

However, the streaming service has refused to do so, according to Entertainment. This has led to unnecessary hate toward some of the “characters” who actually represent real people. In real life, Prince Charles and Camilla have gone so far as to limit the number of people allowed to comment on their Twitter posts due to hurtful comments, according to People.

Those who haven’t lived through this time period don’t know the truth of what happened, but should know that this is a work of fiction only loosely based on true events. Adding a disclaimer would take away from events that are accurately shown in the fourth season, including how the marriage affected Diana as well as royal family traditions.

After watching the series, I would highly recommend putting it on your Netflix binge-watching list. Despite this, watching it once is probably enough and I wouldn’t go back to watch it again. It is highly entertaining, but some of the inaccuracies, including the relationship between Charles and Diana, made me question the show in general. In the future, if I decide to watch a show to learn about historical events, a documentary might serve as a better alternative.