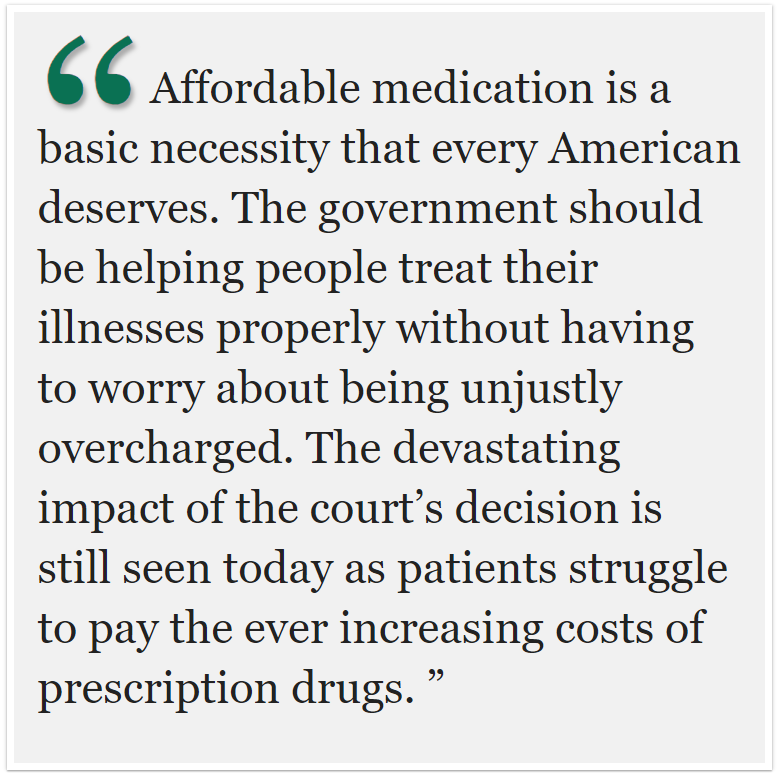 In 2004, Santa Clara County along with other healthcare providers filed a class-action lawsuit, claiming prescription drug makers had been overcharging hospitals for medicine. However, in a unanimous decision, the Supreme Court said the county and other healthcare providers did not have a basis to sue pharmaceutical company Astra USA as the county was only a third party beneficiary of the company’s contract with the federal government. Only those directly involved in the contract had grounds to sue.

Affordable medication is a basic necessity that every American deserves. The government should be helping people treat their illnesses properly without having to worry about being unjustly overcharged. The devastating impact of this decision is still seen today as patients struggle to pay the ever increasing costs of prescription drugs. Clearly, what the government is doing is not enough. Healthcare providers and hospitals should have the ability to file lawsuits to ensure they are receiving fairly priced drugs.

While healthcare providers like Santa Clara County were not directly involved in government’s negotiations with the drug companies, they are the ones responsible for the costs for the drugs. As the intended beneficiaries of the negotiation, the county should be able to hold the companies accountable for their actions. The government may not feel the effects of a small hike in the cost of a drug, but for a hospital and its patients, it could mean life or death.

Pharmaceutical companies argue that decreasing prices of drugs will limit the innovation of new medicines. However, this is simply untrue. Drug prices can be lowered to some extent without impacting the innovations of the biopharma industry, according to Kellogg Insight.

Prescriptions are more than just a means for revenue, each prescribed drug is a way to possibly save someone’s life. There is clearly no reason for drug prices to be as high as they are and due to the court’s ruling on Astra USA v. Santa Clara County, healthcare providers are unable to hold these companies accountable.

Countless Americans have died when rationing drugs such as insulin due to the high costs. This is unacceptable. The selfishness of the pharmaceutical industry is robbing people of the inalienable right to live.

The Supreme Court needs to understand the horrible effects of their decision; Astra USA v. Santa Clara County must be overturned.