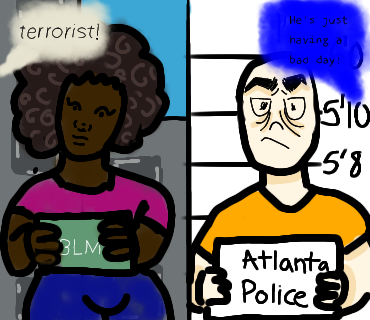 WORD CHOICE MATTERS: Language used by police tells a story beyond what is explicitly said.

It seems obvious that something like the recent Atlanta shooting, in which a white man shot and killed eight spa-goers and employees, six of whom were Asian women, would be considered a racially motivated act of terrorism.

This becomes more clear after a glance at the FBI’s definition, which is “violent, criminal acts committed by individuals and/or groups to further ideological goals stemming from domestic influences, such as those of a political, religious, social, racial, or environmental nature.”

It’s not a stretch to say that the crime could be racially motivated. An overwhelming majority of the shooter’s victims were of Asian descent in a city where, according to the U.S. Census Bureau, only 4.4% of residents are of Asian descent. Targeting Asian women in particular makes him a white supremacist.

Yet, instead of condemning the actions of a mass murderer, police captain Jay Baker explained in a press conference the shooter was having a bad day and brought up the man’s supposed sex addiction as his reasoning for the crime, although police chief Rodney Bryant did mention that whether or not the shooting was a hate crime is still under investigation.

Although the shooter’s mood and mental health at the time could certainly be a motivation for becoming violent, it undermines the severity of his crime to boil his motives down to such simple language and makes Baker sound as if he is attempting to make excuses for the shooter.

This wasn’t the first time police showed sympathy for an alleged white supremacist. In 2020, Kathleen Casillo ran her car into a group of Black Lives Matter protesters, hospitalizing six people. The white woman was then charged with reckless endangerment, rather than the attempted murder charge that would address her intentions, and released without bail.

Releasing a woman who attacked people demanding racial justice sends a message that white supremacists who use violence to maintain their privilege aren’t a pressing concern to the police.

In fact, in the Domestic Terrorism Prevention Act of 2019, Congress recognized white supremacists and right-wing extremists as the most pressing threat of domestic terrorism to the U.S. Despite this clear warning of the terrorist threat posed by white supremacists, it appears that certain individuals of power haven’t caught on yet.

By condemning this act of terrorism, people in power show people that acts of domestic terror are not acceptable in the U.S. By making excuses for the shooter, the Atlanta police force effectively makes excuses for themselves. Excuses to sit by and allow racism to fester in our country.

It’s no surprise that Baker, the police captain, was found to have bought, and posted on Facebook, a shirt conveying anti-Asian messages. Posting his blatantly racist beliefs on a public website shows that Baker might have had a racial bias that led him to downplay the extent of the hate crime, chalking it up to a “bad day”. It says even more about the police force who let racism slide as Baker never thought his job would be at risk.

Baker isn’t the only one who subscribes to this ideology. A report released by the Center for the Study of Hate & Extremism showed that although hate crimes throughout 2020 overall dropped by 7%, anti-Asian hate crimes rose by 149%.

This spike in anti-Asian hate crime shows that there are other people who have violent intentions towards people of Asian descent in this country. If police suggest that this type of crime is not taken seriously, it will enable these people and show people of Asian descent that their own police don’t think they’re worth protecting.

This is a tough time for people of Asian descent living in America. The police’s refusal to condemn anti-Asian terrorism, shows that they aren’t here to protect all Americans; they’re only here to protect the white ones.