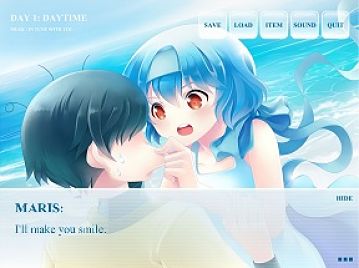 Strangers rarely offer help, and never offer to spend a week trying to make you smile.

Zeiva Inc. released the visual novel “Voices from the Sea” with main characters solitude-loving Cantus and cheerful but naive Maris.

“Voices from the Sea” opens with Cantus at the beach, who has a hobby of collecting seashells. He meets Maris, a young girl as blue as the sea who promises to make him smile in the span of seven days.

Visual novels mainly use static anime-style arts and a number of interactive choices that decide the ending.

They are based off light novels, a new genre that is popular with young people and anime fans.

“Voices from the Sea” is a light-hearted novel with two relatable characters. Cantus represents teen rebellion and Maris is his trigger to adulthood. Her insistent yet lovable actions always managed to bring out a smile.

While the storyline and the characters seem simple, each day Maris does something new, most notable her popping up at random over the course of seven days.

While it is touching and light-hearted, “Voices from the Sea” is difficult to read the same way multiple times. Maris becomes dull and uninteresting and Cantus’ character becomes notably inconsistent.

While Maris’ character art is well-drawn, a problem that occurs many times is the lighting. Her hair is shaded with the sun above, the left arm shaded as if the sun is on the left, her clothes show the sun on the right and her right arm’s shade also above.

As to Cantus’ hobby of collecting seashells, while it brings each day to a close, there is nothing significant about the seashells themselves and the importance they play.

Zeiva Inc. creates a story that can cause anyone to smile.