Taking the Scenic Route: The Journey of an Art Teacher 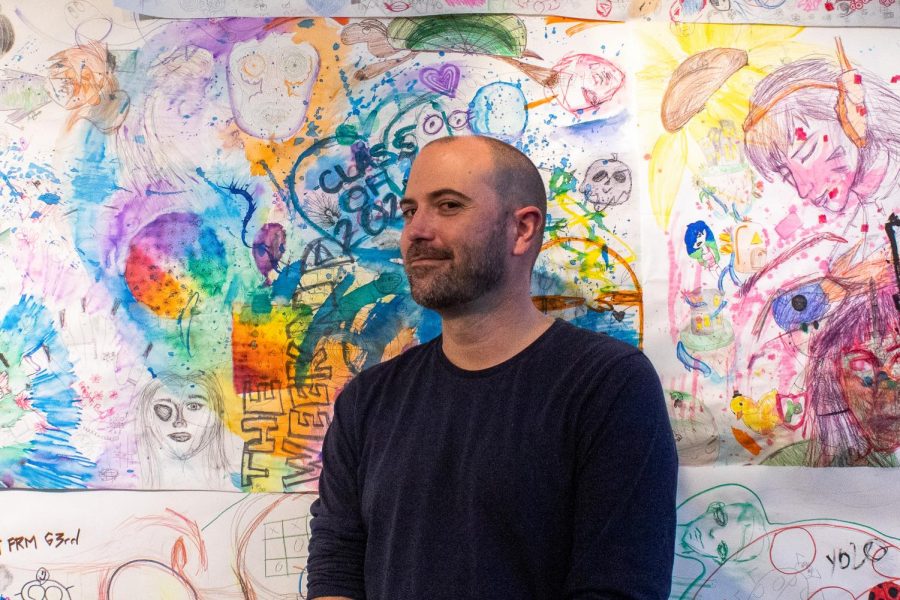 Art teacher Tyler Cripe began his journey as a creator unsure of which path to follow. He had taken a few art classes in school, so when it came time for him to pick a college major, he chose the field out of curiosity. Eventually, Cripe received his degree but did not initially use his art experience in his career as an artist.

“There were times where I didn’t treat [art] as seriously, like when I graduated from college,” Cripe said. “I was fortunate to have a job that paid pretty well and had benefits, but it wasn’t using that part of myself. At some point, I realized that there was something missing.”

It was years later when he was able to find that final piece of the puzzle. Cripe’s younger brother attended an art program in his school, so he would occasionally visit him. He said this made him remember why he loved art to begin with.

“That [love for art] kind of got re-fired up, and through that path of reigniting it, that’s where I decided to quit my other job, go back to school, get the teaching credential and end up here,” Cripe said. “I didn’t make that decision until I was about 27.”

Though he was able to reunite with his passion for the arts, Cripe said he knew he did not have the training to get hired as a fine artist or a designer, so he chose a middle-ground of becoming an art teacher.

“I went on a few interviews and I got a job, started doing that, and the rest is history,” Cripe said. “I was really glad it worked out the way it did. I have the best job in the world.”

As a teacher, Cripe said one of the things he values most is his connection with art students. He encourages communication and bonding within his classroom by allowing students to see what others are doing.

He said those who rely solely on him would only get a small glimpse of what was possible, so collaboration and communication are key.

“Students constantly come up with stuff that is creatively out of frustration, boredom or out of a stroke of genius. They only learn from one of me, but there are 30 of them, so I get to learn 30 different things every single day.”

Art students have access to many different mediums and materials. Cripe said another thing he valued as a teacher is seeing how students experiment with these materials they have never used before. His favorite pieces are the ones where students have no objective and they just simply create.

He said he hopes students will continue to make artwork freely and if they ever do make it into a career, they find a balance between work life and their passion.

“One of the worst things you can do is make something you love your job,” Cripe said. “You [have to] find a happy medium and I feel like I did that for me, but it’s really hard to convince high school students that they should grow up to become high school teachers because they just want to get out of here, and, and me too.”

Finding that balance is something Cripe said he felt grateful for. However, if his high school self talked to him now, he would have disagreed with his occupation choice.

“When I, when I was 18, if you would have said, ‘Hey, you come back and be an art teacher’, I would have been like, ‘You’re nuts,’” Cripe said. “I really needed 10 years to actually go by before I could be like, ‘Oh, that sounds like a good idea.’ I just pinch myself every day that I get to do that. It’s really fantastic.”