Lifting school spirit through the annual Welcome Back rally 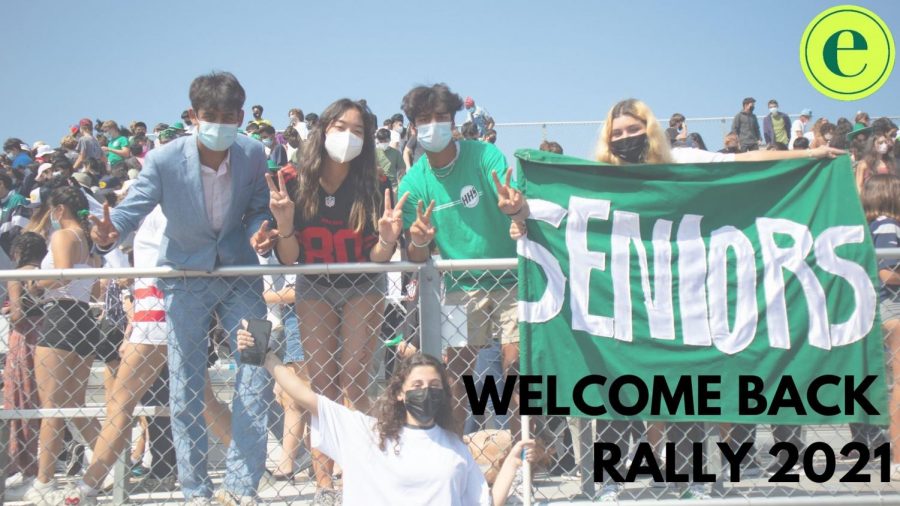 For the past year and a half,  school events have functioned in a limited capacity considering most large student-populated events have been online.  Therefore, the annual Welcome Back rally was purposefully meant to ease students back into the in-person rally experience, ASB rally commissioner, junior Rishi Zamvar said.

Hours of hard work were put into the rally by the ASB members, performers and staff, from making sure COVID-19 restrictions and concerns were settled to setting up the equipment needed for the rally, Zamvar said.  Although HHS has done rallies in the past, this was the first time in ten years a rally had taken place outside.

One of the important questions officers kept in mind was how to make the rally engaging, Rally Commissioner Chloe Lu, sophomore, said.

Students and staff safety was one of the most important details of the rally, Zamvar  said. Making sure all the large group restrictions for the CDC were followed was constantly in play at the rally.

“The performers are going to follow COVID-19 guidelines, wearing masks and whatnot,” Zamvar said. “We’ve left [the specifics] mostly up to them and their talk with admin.”

ASB members weren’t the only ones working tirelessly to create the rally atmosphere. Performers from Eternal Solstice, cheer, KREW and the Equestriettes practiced for hours leading up to the rally, to make sure their dances were near flawless, Zamvar said.

“[Cheer] had practiced Tuesdays and Thursdays from five to nine, and it was conditioning, just constant practice over and over again,” cheerleader, sophomore Nicole Millan said. “And it was stressful for some of us and it was a lot of pressure on us too because we had to get everything in order and the day was super close. We had to do a lot of changes but it all worked out.”

For Millan, the Welcome Back rally was their first time performing live in front of the whole student body, since last year all dances by groups were pre-recorded and placed into a video shown during advisory.

“It was my first rally, and it was really scary and there were a lot of emotions going through me because I didn’t know what to expect,” Millan said. “But I feel like once you’re out there you just kind of do what you have to do.”

For performers at the rally, getting to show all their hard work to a huge group is very rewarding, Equestriette, junior Satomi Hamano said. The dancer  also said that getting to perform live and receive a tremendous amount of support tends to always be a fun and new experience.

“It was different [to perform outside],” Hamano said. “I didn’t actually participate as a performer in the rally when we did it inside the gym before COVID-19, so I’m not sure what that’s like. It was a new experience and it was pretty fun because the crowds were really supportive.”

For a majority of the freshman and sophomore class, the Welcome Back rally was their very first rally they’ve gotten to experience in high school.

Getting the chance to witness many performances live was a fantastic sight, Millian said. The rally was filled with all sorts of different and run events such as chants and performances.

Students were also able to experience the senior walk-in, a major part of the rally.

Considering this rally was a new challenge for everyone, there was a limited amount of annual traditions such as sing-offs and cheer-offs that had to be cut out for the sake of time.

“It was definitely really different [to ones in the past],” senior Marine Brissot said. “I personally like it less because we didn’t have time to do as much of the fun stuff as we used to like the cheer-offs and sing-offs, but I see why people would like this too. I think we really did the best we could. I don’t see how we could have done anything differently.”

The Welcome Back rally was a new adventure for all. While the rally was hit with its fair share of challenges, HHS was able to produce an in-person rally that retained similar performances and structure as previous years.

“[The most memorable part was] definitely going out there to perform with a new team this season and with more members and connecting and bonding since it was their first rally too,” Hamano said. “We can’t wait for the other football and performances coming up this year and we are here to give it our best.”