When people “fight for change” for the trend, what happens when the trend dies? 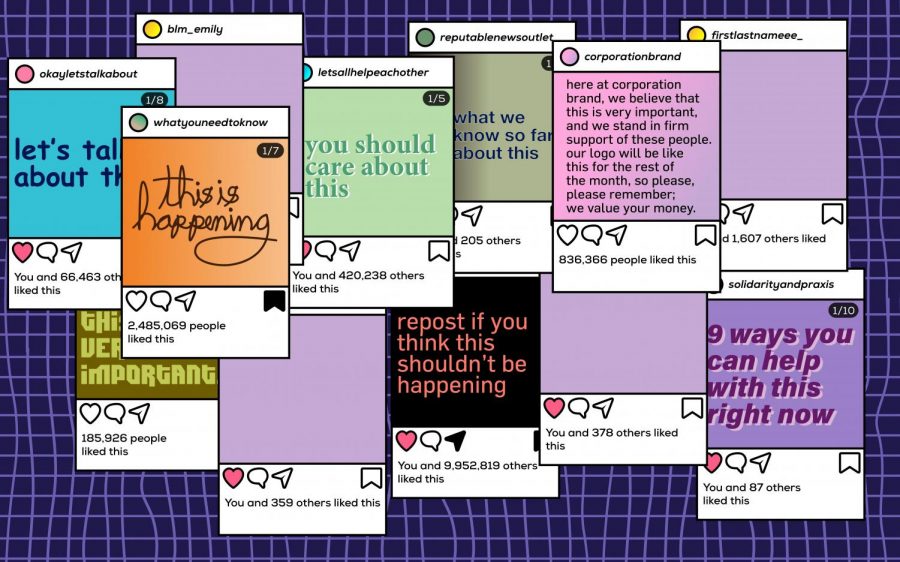 For The Trend: On social media, activist movements are overshadowed by symbolic actions, cookie-cutter infographics, and unhelpful posts. These movements are co-opted by corporations and politicians until they’re no longer deemed trendy, at which point they are killed off.

Performative activism encompasses a variety of intentions and actors. From misguided people with good intentions, those only “woke” for the clout it brings, to corporations who are only in it for the money, a few factors can help you discern whether someone’s actions are performative or genuine.

If an action is inefficient, requires basically zero effort, and does not attempt to make a change or put pressure on institutions, it’s safe to say it is performative.

Whether or not you’re familiar with the term “performative activism,” you’ve most likely seen it over the past few years.

A harmful recent example of performative activism and misguided allyship was during #StopAAPIHate, as allies that chanted to defund the police less than a year prior believed that more policing in Asian communities was the answer. This message was spread by politicians like Andrew Yang, who publicly called for a larger police presence in New York, via Twitter, in response to sinophobic hate crimes.

Two months later, Yang reiterated this at the first NYC mayoral debate, saying that “the police are going to be a core way for us to address the public safety concerns … let me be clear, defund the police is the wrong approach for New York City.”

This narrative that quickly co-opted the attacks on API communities has sparked a debate among the Asian community, possibly reversing progress made in the summer of 2020 and diverting the nation away from alternatives to policing.

Another more famous example was during #blackouttuesday, when users on Instagram, Twitter and other social media platforms posted a black square to their feed on June 2, 2020, according to Vox.  Millions of users participated in the trend; according to CNBC, there were 14.6 million posts that used the hashtag as of 8:45 am PST that day.

#Blackouttuesday evidently shows how symbolic gestures are lumped into the general term, “activism.” Rather than going out and protesting, lobbying, phonebanking, or taking any sort of meaningful action, people would tweet “if you’re racist, we can’t be friends” or post a black square to their feed and claim that they participated in activism.

A black square isn’t educational, meaningful, or effective. In fact, it contains no information, evokes no emotion, makes no impact and has no clear message — it is literally a blank screen.

As harmless as this gesture seems, it was highly disruptive, as #blackouttuesday posts were often crosstaged with #blacklivesmatter, according to Variety. They inundated the hashtag and made valuable information about local protests, phonebanking, and bail funds harder to find for community organizers. Ultimately, #blackouttuesday clogged the flow of information, and the movement was effectively choked.

Jenner, specifically, came under fire as the controversial 2017 Pepsi ad she starred in resurfaced, where Kendall co-opts a protest and diffuses the conflict, handing a police officer a can of Pepsi to cheers. This minimization was Pepsi’s version of a “message of unity, peace, and understanding,” but if anything it was a grave misunderstanding.

In reality, Black Lives Matter was met with a militarized police force, and brutality — with tear gas in Pennsylvania, abductions by unmarked vehicles in Portland, and in New York, where police ran protesters over.

Though the New York Times says this was a mishandling, this was exactly how police had handled these types of protests for over a century. Every time labor unions, Antiwar movements, native organizers, and the black community have protested, they were met with state violence.

But to most people, once they no longer feel like they have to care, they can tune out, regardless of whether there is justice or not.

Little attention is given to the fact that so far, police have killed 604 people this year; in fact, despite the lack of police reform, with states like Texas defunding cities like Austin that defunded police last year, Black Lives Matter’s net approval has returned to where it was in 2018, at just 3%.

Ultimately, this shows the distinction between activists and performative activists; when the movement fell out of trend, performative allies got tired of it and stopped caring.

A third example was the wave of petitions created on change.org.

On social media, change.org petitions spread like wildfire; all you had to do to share them was to copy and paste the link into your bio, or into a group chat.

However, these petitions are essentially rendered useless; on the national level, there is no central organization to ensure that petitions (past a certain threshold) get any serious consideration. There is also no way to ensure these petitions’ signatures are legitimate; all someone has to do to sign a petition is type their name and email. An organizer would have to pay to promote their petition, localize promotion, and to access the names and signatures on their petition.

And on the local level, it is virtually impossible to know how many of these signatures come from within the area. For example, when you organize a school petition, it’s likely that a number of signatures you get are from outside of your school, since anyone can sign your petition.

There are easily more legitimate and recognized ways to create a petition — for starters, to get physical signatures — but that, of course, requires actual effort and is less convenient.

Overall, performative activism is unhelpful at best, and at worst, detrimental. If you want to get involved, by all means, get involved; but do more than just a quick repost or a petition. Activism takes time, and change takes effort.