Vallco to get second chance 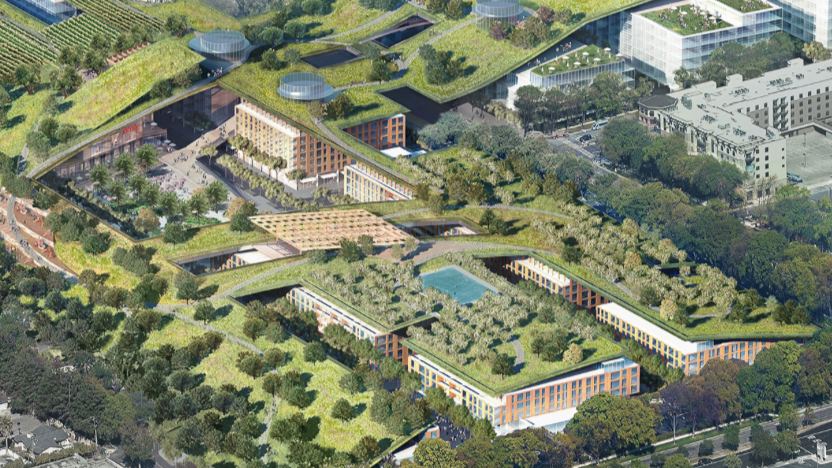 A proposed plan to replace the Vallco Mall area with a mixed use city center has been submitted to the city of Cupertino.

The renovated space will be called The Hills at Vallco, and is being developed by Sand Hill Property Company, a Silicon Valley Real Estate Developer.

Senior Abigail Peña said she is looking forward to future changes in the mall’s area.

“Vallco Mall is lacking good stores,” Peña said. “They need to revamp it and make it look not old.”

The proposal for The Hills includes residential areas, retail space and Cupertino’s largest park, according to the official Hills at Vallco website.

Sand Hill Property Company’s managing director Reed Moulds said in an email that the green roof was added due to community interest in an open space being incorporated into the city center.

“The green roof will be publicly accessible and provide unprecedented recreational resources, a 3.8-mile trail network for jogging and walking, vineyards, orchards and organic gardens, an amphitheater, children’s play areas and a refuge for native species of plants and birds,” Moulds said.

According to the project’s official website, the plan will keep the AMC movie theater, ice rink and fitness center.

“Community input has been a vital ingredient in the creation of the plans for The Hills at Vallco,” Mould said. “Since purchasing Vallco Shopping Mall in late 2014, Sand Hill Property has hosted more than 30 community events and presentations and has met with more than 2,000 residents and business owners.”

Another feature included will be an Innovation Center, focused on giving students an area to work on projects and host competitions, according to The Hills website. The Innovation Center was specifically requested by FUHSD, Moulds said.

“[The center will serve as] an incubator for student‐led businesses, a hub for the district’s work‐based learning initiatives, a workshop where students can build all kinds of projects and potentially even an area for robotics competitions,” Moulds said.

Sophomore Susang Sijapati said he feels positive about the possible addition of a new city center for Cupertino, saying it will improve the social atmosphere of the area.

“I hope the new city center will bring a little more livelihood to our city,” Sijapati said.

Economics teacher Matt Wright said he is doubtful about the probability of the renovations occurring.

“I’ve heard so many things over the years about Vallco,” Wright said. “At one point, a development wanted to make it like a South Bay version of Chinatown, like San Francisco.”

The project is likely to occur due to the successful purchase of all 50 meters of the mall, as well as the funds to build the project without third party debt, Moulds said.

“This allows for a unified vision and revitalization plan that was never before possible for the site,” Moulds said.

Wright said he expects traffic to also be a reason for concern, as Vallco is located near the new Apple Campus, which is currently under construction.

“Once the Vallco center is open and the Apple [campus] is open, I will avoid driving that way because of how much traffic I anticipate,” Wright said.

Sand Hill submitted the application for The Hills at Vallco on Sept. 8, according to the city of Cupertino website.

“We hope to break ground in early 2017 and open the Entertainment District [to include at least the new AMC, the bowling alley, and the ice skating facility] in late 2018,” Moulds said. “The balance of the project is scheduled to be complete in 2020.”