Off the Record: setting intentions, not resolutions 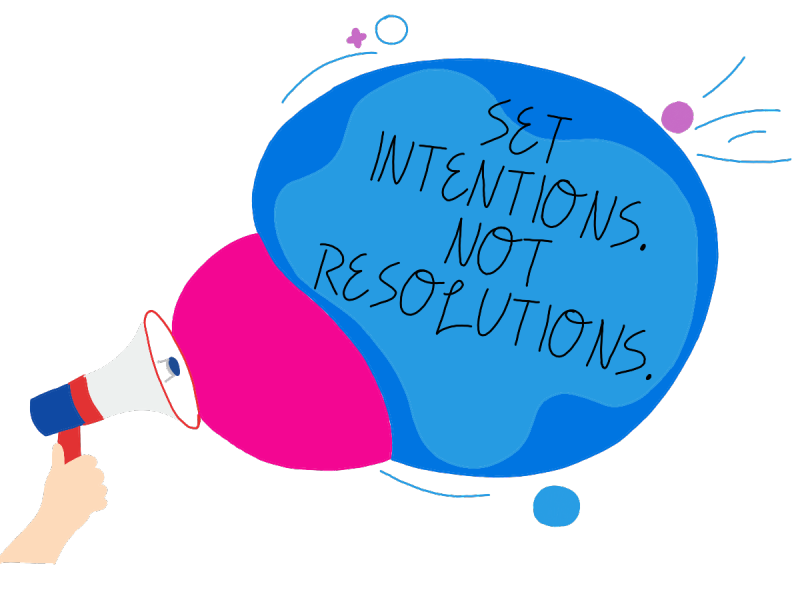 Resolutions are often restricting and explain why most people, including myself, fail to continue after a certain point. Intentions are much more flexible and are a more encouraging way to achieve your goals.

Every year, I happen upon conversations about new year’s resolutions, and I often stand there awkwardly shifting on my feet, unable to string together a sentence to contribute. And it’s because I don’t keep resolutions myself, at least in the most traditional sense. Let me explain. Rather than keeping resolutions, I set intentions for the new year.

A couple years ago, I kept resolutions I believed I could attain: go for runs four times a week, eat healthier, attempt to find the positive in every situation, etc. None of my resolutions were out of the ordinary, and yet, it was so easy for me to break them. That, to me, is baffling, since resolutions are essentially promises we keep to ourselves, so why was I able to break them without a second thought?

After countless hours of reflection, I realized the restrictive nature of resolutions prevented personal growth. Resolutions are binary — you either fulfill them or you don’t. In this sense, setting them doesn’t offer us any space to explore the gray areas that there are often in life, ultimately restricting resolutions from being fulfilled, according to marriage and family therapist Oliver Drakeford. For example, if I set the resolution that I wanted to eat healthier four days of the week, but I didn’t consider the fact that there may be birthdays or events on multiple days of the same week which might constitute a break in the resolution, the gray area would be unaccounted for and the resolution would be unfulfilled.

On the other hand, setting intentions allows for us to be more open-minded and welcoming to the variety of outcomes that are possible if we aren’t restricted by just two outcomes. In the same example, if I had set the intention that I wanted to eat healthier than I did the previous year, then no matter the amount of events or birthdays I had in a certain week, as long as I made progress — regardless of the amount — would be fulfilling the intention.

Additionally, several differences exist between intentions and resolutions and these differences are what makes intentions easier to follow through. With intentions, the objective isn’t necessarily about the end goal, but rather the journey toward it. And since every day is a journey, I am more likely to follow my intentions, since I am aware that even the smallest progress each day is able to  fulfill my intention of reaching my goal. In comparison, the word “resolution” signifies that the objective is about the end goal rather than the journey to get there. With less of a focus on the small day-to-day tasks that need to be achieved in order to arrive at the resolution, small progress on a day-to-day basis may seem insignificant and more discouraging to some.

To depict the difference accurately, let’s take my example of going on runs. When I resolved to run four times a week, I set myself up for one of two outcomes: failure or success. Either I went on a run four times a week, or I didn’t. However, this year, if my intention was to continue running, I would set my intention to run more often than I did last year, or to run a sufficient amount a week. In this way, reaching my goal would be much more attainable, and I wouldn’t be discouraged after one week to stop if I didn’t meet my resolution.

Additionally, intentions can be made into more attainable pieces, than overarching yearly goals. By setting daily intentions like intending to eat a healthy breakfast or wanting to exercise for 10 minutes that day, goals are not seen as daunting prospects, but rather attainable and motivationally-inclined events.

The flexibility intentions hold creates a greater possibility and motivation for me to achieve those goals. Now, when I think about the new year, I no longer set hard resolutions and instead focus on creating intentions, and I encourage you to do the same.