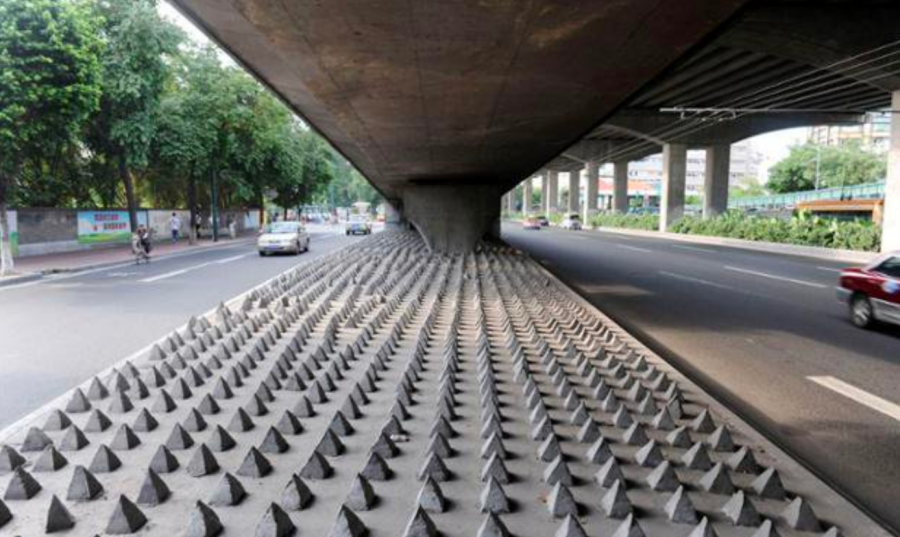 Spikes constructed below bridges is an attack against homeless communities.

I have often sat on public benches and been confused as to why there was a divider installed in the middle of it. It didn’t seem to serve a clear purpose: the bench wasn’t made more useful, comfortable, or aesthetically pleasing. I would never guess the reason behind this design was rather disturbing. These benches are among the many forms of “hostile architecture” — also known as “anti-homeless architecture” or “defensive design” — which refers to the infrastructure built by city planners that deters homeless people from “setting up camp” or resting in public spaces, according to Cambridge Dictionary. Defensive design architects claim these elements are intended to eliminate crime and ensure that public spaces are used for their original purposes, but they are merely a way to exclude targeted unwanted groups.

Anti-homeless architecture is seen in a variety of structures like benches with dividers, spiked window sills, slanted benches and under-bridge spikes, according to The New York Times.

On the surface, hostile architecture is portrayed as a useful implementation for citizens and communities. For instance, sidewalk boulders will seem like abstract architectural art, when in reality, they are built to deter the homeless population from loitering. Curved benches seem like a neat design choice, when their true purpose is to make it impossible to sleep on, according to Ranker. These designs are created to appear discrete and perplexing in order to mask their true purpose.

Planners are almost always aware there are alternative purposes for these architectural elements, according to The Guardian. For example, advocates of defensive design argue their tactics discourage criminal activity and increase public safety. In a way, they are acknowledging that they are trying to prevent those they believe are “bad” people from using these public spaces.

These tactics create an association between homelessness and crime rates in cities. These often incorrect assumptions do not help homeless people, who already suffer from the harsh conditions of living without a place to call home, let alone harsh social prejudice. The last thing cities need to do is further stigmatize an already stigmatized population.

Without proper research, I would’ve continued to naively walk alongside these structures of suffering. A bench with dividers to somebody who is not homeless is merely a bench. A boulder under a bridge is exactly that: a boulder under a bridge. But to somebody without a home, that bench means a place to sleep. To a homeless person, a bridge means shelter. It means protection from heavy rain and snow, as well as a place with privacy.

If we do not deconstruct anti-homeless architecture and don’t advocate for inclusive architecture, not only will homeless populations continue to be ostracized and stigmatized, but we will continue to be bystanders to infrastructure that can kill. For example, fenced grates are where defensive design architects purposely cut people off from direct access to them, not caring that it prevents homeless people from staying warm, according to Invisible People. This is a conscious decision being made by those in charge, so as I see it, if a homeless person dies from hypothermia and could have stayed warm from one of those grates, what took place is a form of murder.

The issue of hostile architecture is not something we can put on the back burner and pretend doesn’t exist. That creates an “out of sight, out of mind” narrative for non-homeless citizens, while homeless individuals’ opportunities for comfort and shelter decline. Architects and city planners aren’t ignorant — they know the harm caused by defensive design. Hostile architecture makes things like park benches, which are made to expand the feeling of community, into something that limits it instead. Through defensively constructing our cities, planners are deciding who can walk where, whether or not someone is able to sleep or seek shelter, and most frightening of all, pushing homeless people out of the public eye. They are designing our cities in a way that sends a clear message to the homeless: you don’t belong here.

Given that studies done at Columbia University and the University of Pennsylvania have shown there are many other ways to deter community crime, defensive design only seems to exist to punish homeless people. For example, researchers found in a 2018 study at Columbia University found that green spaces and community gardens in previously vacant lots reduced violent crime by 30%, reduced people’s fear of going outside due to safety concerns by 58% and increased people’s use of outside space by 76%. We clearly know how to increase public safety without harming the most vulnerable among us.

The homeless population is one of the most vulnerable in a community. Regardless of one’s situation, everyone should be given the right to live. Anti-homeless architecture is a way people have found to hide these suffering people, so the privileged don’t need to worry. However, the problem of homelessness is still there and gets worsened when they can’t even live in spaces that are meant for the public. If we do not push back on hostile architecture, the homelessness epidemic will only worsen.