French Club, Red Cross team up for a schoolwide ceremony 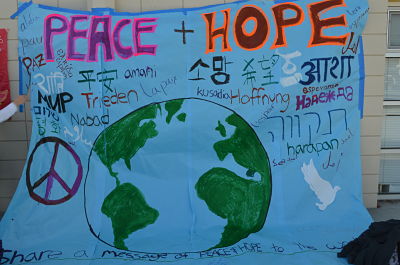 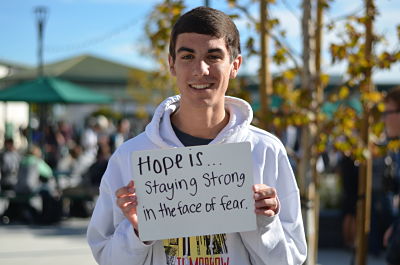 Following the terror attacks that left over 130 people dead in Paris, French teacher Muriel Von Stein said she decided to suspend the regular lessons planned for her classes on Monday to discuss the tragedies with her classes.

“My message was really how to turn something negative into something positive,” Von Stein said.

Inspired by the discussion, junior Yannik Omictin
said he teamed up with junior Claire Wynne to bring the HHS community together through a “ 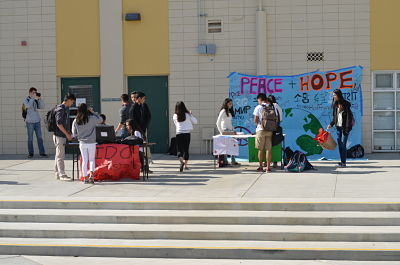 Celebration of Peace and Hope,” which took place on Friday.

“We thought that it was good not to be specific about France or about Lebanon because there have been many sad events in the world,” Von Stein said. “Let’s think about everybody, be thoughtful of everybody suffering.”

The two clubs made a poster labeled “Peace and Hope” in various languages for students to sign during brunch and lunch and set up a donation booth where students could donate to the Red Cross. Students were also given the opportunity to write personal definitions of peace and hope on whiteboards. 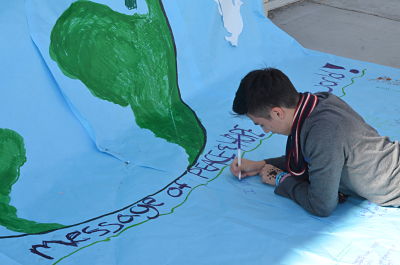 The National Music Honor Society performed “Imagine” by John Lennon, an iconic song of peace, at the end of lunch. 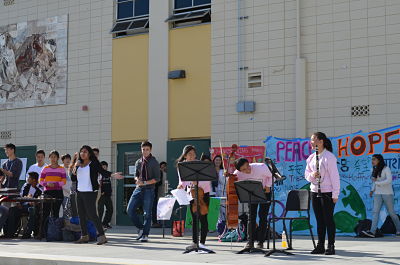 “It’s really good to raise awareness … we need to promote peace and hope in our school and hopefully that will branch out to the rest of the world and our community,” Red Cross officer Nitya Tammama said.

The Muslim Student Association (MSA) held a special meeting during lunch on Friday to discuss the negative attention Muslims have been receiving as a result of recent accusations against Islam surfacing in the media.

“Some of my [Muslim] friends, they’ve been insulted after the Paris attacks, they were called terrorists,” club member Bilal Qureshi said. “It’s an impact on how people look at Muslims now. It’s like our culture is being demonized.”

“They’re masquerading as Muslims,” Bhaisaheb said. “These people have twisted the meaning of our whole book and our whole religion.”

A moment of silence was held on Tuesday before the morning announcements after Principal Greg Giglio recognized multiple recent tragedies around the world and assured students they are in a safe, supportive place.