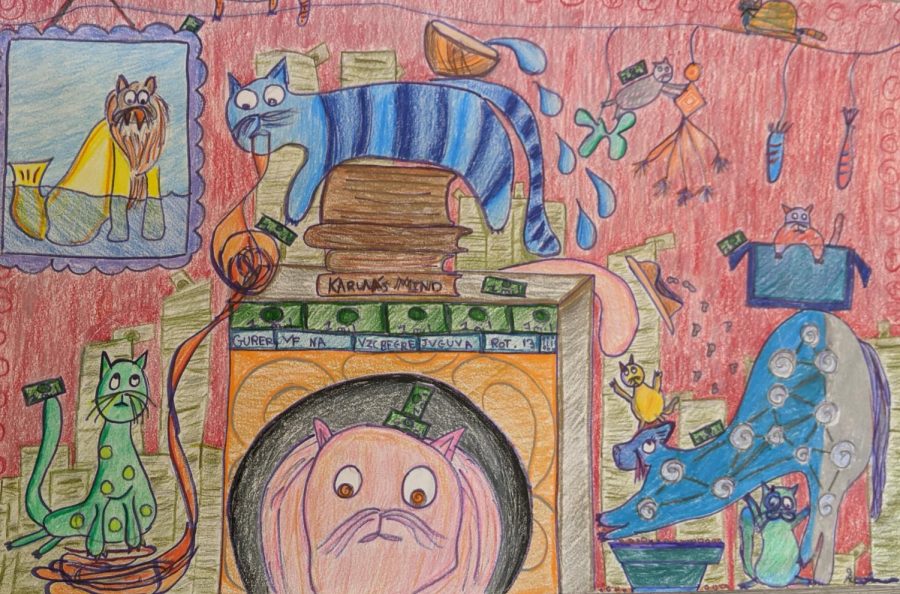 Work in progress: The first class project was challenging to complete, but ultimately was a lesson in patience and self-control.

While stepping into the Art 1 classroom on the first day of school, it took a second for me to take in my surroundings. The wonderful chaos of it all and me right in the center. I did not know quite what to expect since it had been three years since my last art class, but I knew I was excited. While picking courses, I realized my junior year was going to be incredibly difficult and I would only manage it all through using my elective period as a chance to relax and really immerse myself in creativity.

It was our first project of the year and the prompt was simple: just doodle whatever you want. It was a way to train our brains to not be stuck on perfection and be willing to just get it all out on paper.

I decided to draw some of my favorite doodle classics (cartoon animals of course). I really started to get into it and the more time I spent, the more I felt I really had something special in front of me. I was convinced my drawing was a stellar work of art. Considering all the time I had spent on it, it had to have been, right?

But as I started to scan my classmates, the sheer talent around me was absolutely shocking. There were people whose artwork looked like it belonged in a gallery or museum. They were so ahead of me, both conceptually and technically that I was aghast. I realized I never could compete with them.

It suddenly hit me then that it was ludicrous to even consider it a competition in the first place. I had let my competitive nature influence my thoughts. Instead, I tried to remember my original goal of the class: to enjoy myself and take my mind away from the unceasing pace of life, to learn and improve without worrying about the results. The only real person who was concerned about my skills in the class was myself.

After all, the idea of the project was to just keep drawing without worrying about the finished product  and my thoughts were rooting me in place instead of allowing me to move forward.

I decided to embrace my art and take pride in it even with all the flaws. It needed polish in some places, but that would be a skill I would learn over time. Appreciating what I did is something I knew had to come from within.

In life, we often choose our interests based on what we have an affinity for from the get-go and I am also a victim of such decision-making. But art was the first thing in my life that I knew I wasn’t naturally talented at, but loved anyway. When I enter that classroom, the feeling of euphoria I felt on that first day never leaves my chest and I am ready to leave my worries behind and get to work.