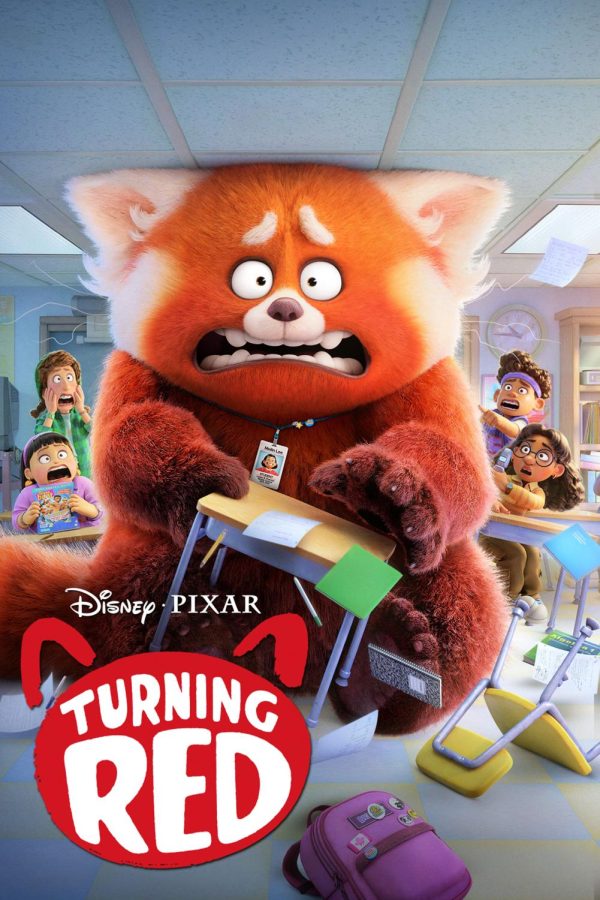 PIXAR’S NEW FILM: Studio releases a heartwarming film on growing up with family and social expectations.

By Chloe Wong and Aiko Charon

While Pixar is not necessarily known for deep movies, Pixar’s new movie, “Turning Red,” brings many firsts into the industry. “Turning Red” is an animated comedy about a joyful, talented and slightly awkward girl named Meilin who is struggling through regular growth and development while dealing with a family curse. Her emotions cause her to transform into a red panda, which affects her daily routine of fangirling over a boy band, hanging out with her friends and helping her mom with cleaning the temple they own.

This movie is funny, sweet and relatable. Our protagonist, Meilin, perfectly encapsulates the aura of a middle schooler. We can all recall awkward memories from middle school that are both nostalgic and embarrassing. This movie captures the feeling of that time, sprinkled with a bit more color and flair.

However, “Turning Red” is far more than a feel-good film with a lighthearted message. Aside from the moments when Meilin turns into a red panda or when she feuds with a classmate, she deals with unrealistic expectations from her parents. This is yet another theme many viewers can sympathize with. We see Meilin’s mother repressing emotions from her own mother, and these unresolved emotions translate into pushing her own expectations onto Meilin. Eventually, we see the pressure gradually build until it becomes too much, and Meilin reaches a crossroad where she must choose between pleasing her mother or showing her true self. Having to maintain relationships with family and friends while juggling academic obligations is something that Meilin and I have in common. Trying to be socially and academically successful can prove to be a daunting task. However, it something both Meilin and many other students must do.

One part of the movie that truly demonstrates the pressure many children go through is when Meilin has to choose between her mother and her friends. In a heated moment where Meilin and her friends are caught sneaking out by her mother, Meilin desperately throws her friends under the bus. She refuses to take any blame and paints the situation to be her friends’ fault. Although this seems cruel, it is clear that Meilin feels the need to maintain her untarnished image in her mother’s eyes. Because all Meilin knows is making her mother proud, she is unable to break free from the craving of her mother’s validation.

“Turning Red” does a great job of touching on important topics while also being fun for children. These layers to the movie make it enjoyable yet thought-provoking for people of many ages.

Many parents I have encountered in the Bay Area tend to prioritize academic success over mental health. There is a precarious balance between succeeding academically and thriving emotionally, and one must compromise for the other to be fulfilled. Meilin also struggles between her priorities, often having to make the impossible choice between her academics and her friends.

While the movie incorporated humor, it also touches on topics that many teenagers can relate to, such as the balance between family obligations and social lives. Being a good mix of relatable and emotional, this film is far more than just a children’s movie. This movie combines lighthearted humor with important themes, and I hope other viewers will enjoy watching it as much as I did.