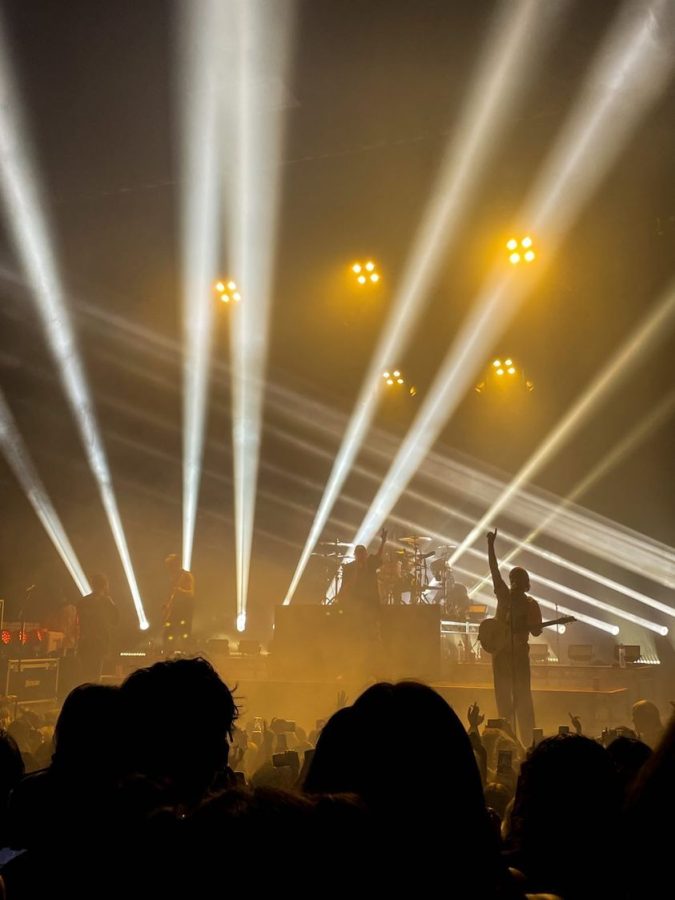 DID NOT DISAPPOINT: Chase Atlantic filled the venue with passion and spirit providing fans with a perfect experience.

By Amber Birrell and Christine Kim

Although Kate is a talented vocalist and has a lively presence on stage, the forty minute opening performance was underwhelming. Her bubblegum pop style heavily contrasts the darker, emotional feel of Chase Atlantic, resulting in a dead crowd, anxious to see the band they had come for.

After the opening act, the excitement was palpable in the air. Cheers could be heard as the drum set was unveiled and the sound check was performed. However, as the minutes dragged on by and no band was in sight, everyone became restless. I was no exception, as the 20 minute intermission felt infinitely longer standing in the middle of a sweaty audience. That gave me enough time to realize how questionably sticky the floor was; lifting one foot took more effort than it should have. But the fun gossip behind me made the long wait much more bearable.

Chase Atlantic is a band you cannot put in a box, as their music ranges from R&B to rock. I have obsessively been listening to them for the past few years because they provide a unique listening experience. The instrumentals themself give so much emotion and depth to their songs, which is an aspect often overlooked by other artists and thus sets their music apart.

After the agonizing wait, the moment we had all been waiting for came. The lights glared in our faces as the band stormed on stage, while the music and screams blasted across the venue.

Immediately, I was impressed with their presence on stage. Throughout the performance, they had the crowd wrapped around their fingers soaking up every bit of the show. Lead singer, Mitchel Cave did an incredible job of engaging the audience, making them feel like a part of the show and encouraging fans to sing along. During songs like “OHMAMI” and “Drugs & Money” the fans were almost as loud as the performers themselves and during “Into It,” a chorus of voices from the crowd filled the room as Cave, held his microphone out.

Throughout the captivating performance, the show held exciting visuals from clips of music videos, lyrics on the screen to vibrant lights shining across the venue. But the cherry on top was the live saxophone played in songs like “OHMAMI” and “Into It” by band member Clinton Cave.

While seemingly small, such accompaniments  are not often included in popular live shows and  adds more underlying emotion in the music, setting this concert apart from others I have been too.

By the end, my ears were muffled from how loud everyone was — a testament to how energized the crowd and band was. I would definitely go again, but go a little earlier. The doors opened at 7 p.m. while the concert started at 8. I got there at 6:30, figuring I would have enough time to grab a bite to eat before, but the line was already wrapping around the building. Jumping at a concert while hungry and thirsty was not the best idea.

The combination of the band’s angelic voices, live instruments and visuals was incredible to hear in songs like “Too Late,” “WHAT U CALL THAT” and “Swim.”  Overall, the concert was perfect for screaming my lungs out — specifically for my pain from my AP scores. The energy was high, the crowd was hyped and I loved the feeling of the heavy bass vibrating the whole room. Hearing Chase Atlantic live gave an entirely new look to their music; it was delivered with an energy that recorded songs cannot match.