The lightsaber to savor 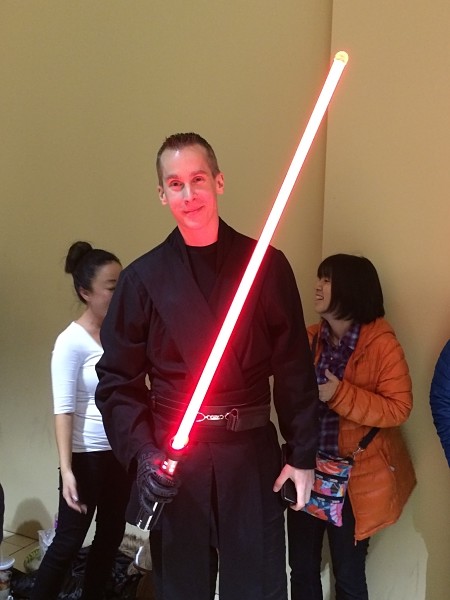 An audience member dressed as a Sith Lord waiting in the movie’s queue.

The grip of nostalgia have never been as strong as the grips of the latest Star Wars movie, “The Force Awakens.” In its triumphant return to the silver screen, this new episode delivers extremely well on every front and easily outshines the much-deplored Star Wars prequels.

Given the anticipation to this film, I will avoid any potentially spoiling details. Since the trailers for Episode Seven were intended to keep the audience in the dark about the plot, knowing the plot definitely affects the experience of the movie.

The film starts with an adventurous feel that is consistent throughout the movie, thanks to the stellar characterization brought to light by each character’s dialogue. The main villain, Kylo Ren (played by Adam Driver), has much more substance than Darth Vader from the original movies. Ren’s dialogue and the way actor Driver delivers those lines, even with his heavy monotone voice, adds a touch of humanity to his character.

Daisy Ridley’s and John Boyega’s characters have amazing chemistry with each other, which stands out because of the actors’ stellar delivery. Harrison Ford’s Han Solo is more than just a fossil in this film due to the important role his character plays in the movie’s plot. Moreover, Ford’s acting highlights an evolution that the Han Solo from the original movies underwent from “Return of the Jedi” to “The Force Awakens,” showing the depth of the writing in this film.

The movie’s cinematography is extremely practical and a refreshing change from the CGI mess of the Star Wars prequels. The locations are realistic, enhancing the beauty of the shots seen in this film. Most of the movie’s creatures are also believable. The entire film has only two CGI characters who, thankfully, do not have too much screen time.

The film’s feel is also enhanced by the score, composed again by John Williams. It not only dramatizes the emotions conveyed by the acting but also strikes back at our heartstrings, throwing viewers back to the beloved soundtracks of the original movies.

Given the loyalty fans have had to the franchise since “A New Hope,” the audience in the theatre was extremely enthusiastic and cheered as it saw the remnants and characters from the original trilogy, which was the cherry on top of this incredibly delicious sundae of a movie.

There is ‘a new hope’ for the Star Wars franchise now.