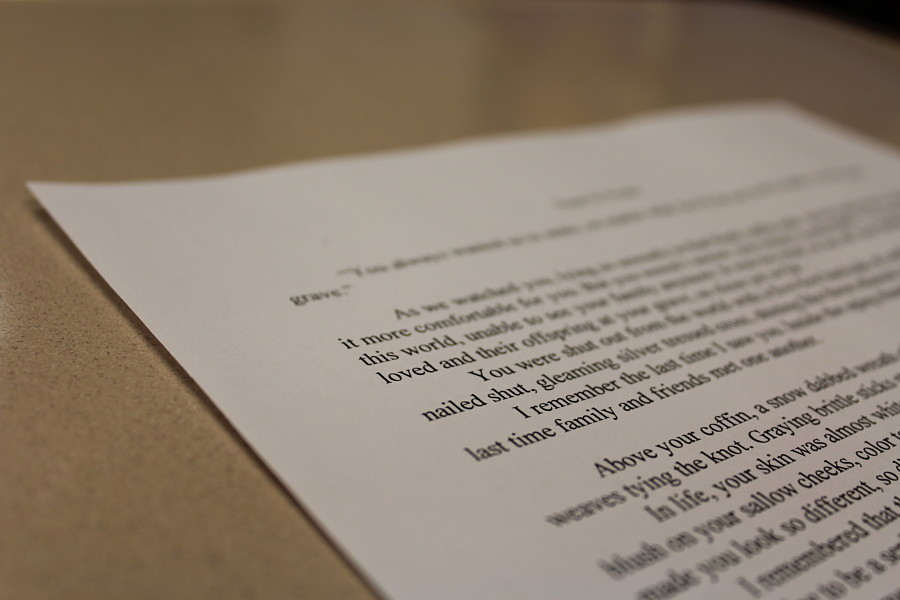 A printed version of a written story about death

Outside of school life, there are students who spend their free time writing. Casual or professional, veteran or novice, each writer continues to hone their skill for others to read or keep to themselves. Several members of Homestead’s writer community contributed a bit of their story.

Is writing a hobby or do you take it seriously?

How much time do you spend writing?

What genre do you usually write?

Did someone or something inspire you to write, or self-inspired?

I would say writing itself is self-inspiring, but I was inspired to write science fiction by Star Trek. Something about it just fascinated me. The explorations, the vastness and the majesty of the universe.

Are you self taught or learned through classes?

Self taught, I guess. I read a lot, about 30-40 books a year. I take on writing styles subconsciously.

What are your thoughts on your writing?

I hate them all. Because after I write, I enjoy the writing part, but my writing sucks. So if I try rereading it, I cringe at every sentence. Usually when I write, I store it on a computer and never touch it again.

Are you aiming to be a professional writer?

Definitely not. But I do hope to eventually have books that don’t make me ashamed of myself. I’ll self-publish them on Amazon.

What sort of hardships do you face when writing? Besides writer’s block?

Well right now, the biggest hurdle is finding time. Because school, college apps… and finding the motivation. It takes me a while. After I finish a book, and then I reread it, and then I hate it, I kind of don’t feel that good about myself, because I have to work back to that, and kind of energize myself to write again.

How do you overcome your hardships?

That’s what I use the National Novel Writing Months for because there are hundreds of thousands of other people suffering with me. And we could all hang together.

What is writer’s block?

When, you can’t write, and you really want to.

When did you start writing?

I had a fifth grade teacher who encouraged us to write personal essays every week, so probably fifth grade. She was great.

Is writing a hobby or do you take it seriously?

It’s a hobby, I don’t have the time to take it seriously. That happens over the summer I set myself a goal of like 25,000 or 50,000 words and I’ll write, for like, an hour a day and get like, a 1000 words written. But then during the school year, practically zero writing happens.

When you look back at your original work written over the summer, do you feel that you could have written the story better?

Generally, yes. I’ll read through it and I’ll find that there is no plot. Or that I’ve got terrible inconsistency between, like, characterization in one portion of it or another portion.

What genre do you usually write?

Fiction. Sometimes fantasy, generally realistic fiction. [Usually write about] people. Like going to the park. I’ve never actually written a story about a person going to a park.

What have you written?

There’s one about this guy who is a prince who like, suddenly everyone in the castle disappears and it’s just him and the horses and he just sort of hangs out in the castle. It sounds really lame when I describe it like that, but it is kind of lame, I don’t know.

What sort of hardships do you face?

When did you start writing?

I think I really got passionate for it probably in third or fourth grade. And that’s also when I started to enjoy reading because I wasn’t a big reader. A Shakespeare biography for a project, and it appealed to me and from then I read a long book series, and I just enjoyed reading.

What is your writing style?

I do enjoy [Shakespeare’s] poetry, and his many pieces, but I tend to write just creative narratives every once in a while when I’m feeling, like, a spur of creativity coming on.

Were you self-taught or did you learn from someone else?

My grandmother had been an English teacher, and she was very passionate about English. Then she became a tutor and she would always come over and we would review different writing techniques and [it was] really fun to see what she had in store for me.

What’s the genre you usually write?

Mainly fiction, occasionally mystery, although sometimes, comedy or romance, whatever really comes to mind. Reality not so much, I also write some fantasy.

Where do you get your inspiration for writing?

I’ve written things about my own life and also other people in my life. And usually there is some sort of inspiration that they put off of. Either it’s something at school or my home life or whatever it may be.

What is writer’s block?

I think writer’s block is just creativity, or inspiration not being able to come at a time and we tend to over-obsess over that. We’re really obsessed on that thing so we don’t, our creative thoughts about our own story don’t really come through.