The inside secrets of a treasured class that doesn’t get recognized enough. 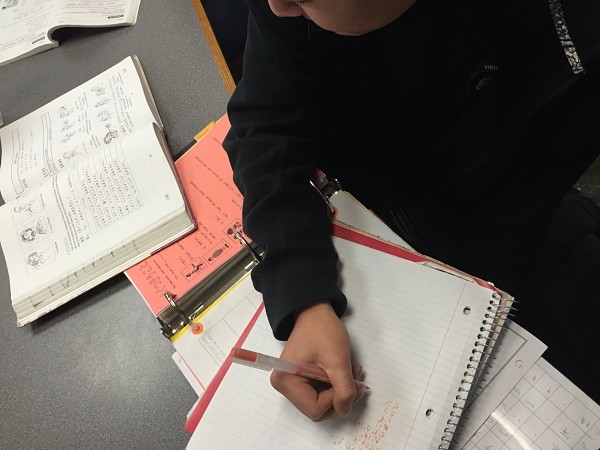 Students tend to do worksheets for homework or assignment from the textbook.

From the colorful projects lining the L-building walls to the adorable workbooks that everyone carries around campus, it’s no lie that Japanese is one language many secretly wish they took.

For others, previous exposure to the language was their reason to take the class.

“I started self-studying [Japanese] in eighth grade,” sophomore Rebecca Zhu, another Japanese 3 student, said. “And when I found out I could take Japanese in high school, I decided to take a placement test and I actually placed into Japanese 2, which I started in my freshman year.”

Not only does the class size differ from the rest of the languages, but the class and the language style vary greatly from others offered.

“The biggest difference [between Japanese and other language] is that of word order,” Zhu said. “In Japanese, the word order is subject-object-verb… in Japanese, you’d say ‘I apples like.’”

“We don’t really have to bend the word as much. It’s just like changing the endings,” Linde said.

Regarding the most difficult part of Japanese, both Zhu and Linde said the kanji alphabet is the hardest part of the language. Made up of Chinese characters, kanji has so many symbols that Linde isn’t sure “if anyone knows all of them.”

But difficulties in the language do not set students into a negative relationship with the class. If anything, the hardships of the class help students excel and enjoy themselves.

Luckily, Japanese students are able to apply their skills from inside the class to the community outside. Clubs like Japanese National Honor Society (JNHS) help connect learners with Bay Area Japanese cultural events, where they can practice the language and experience the culture.

“Last month, [JNHS] had this event called ‘mochitsuki’ which basically we made this Japanese food and then we also have various opportunities to volunteer at Japanese festivals,” Zhu said.

But Homestead communities and clubs aren’t where language immersion ends.

“We are trying to open [opportunities] up so they’re more district-wide so that we can have that opportunity to have that love for a language and do it with new people,” Japanese teacher Lisa Nakamatsu said. “We’ve got good things on the horizon.”