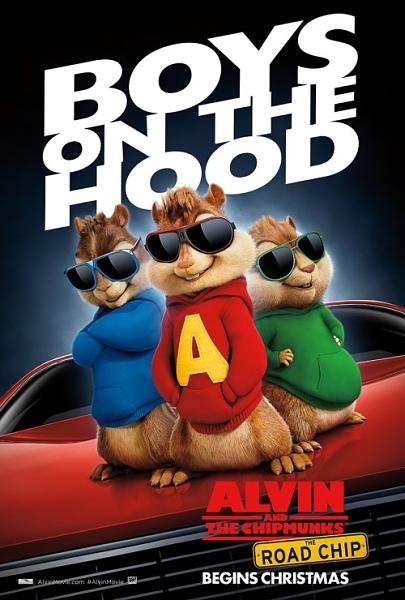 Let’s be honest: no one thought “Alvin and the Chipmunks: Road Chip” would be a good movie.

This boring story of three high-pitched singing chipmunks has never been interesting or intriguing, and one can only wonder why Hollywood continues to pump out these thoughtless, rodent-based musical movies.

Once again, the story starts on the three rodent brothers (with iPhone product placement, no less) and their hijinks. The movie kicks off during a party that will have no bearing on the plot except to get Dave to yell out the classic line: “ALVIIIN!”

Dave, who looks around twenty years older than he was the last movie, lectures the chipmunks in a way that only bad movies dictate: exposition.

It turns out that since the ending of the last movie, Dave has found a girlfriend and is going to Miami with her. The chipmunks meet Miles, the girlfriend’s son, and decide they hate him immediately. In order to stop Dave from proposing to his girlfriend, the chipmunks team up with Miles and take a road chip (get it, guys?) to Miami.

From there on out, a bunch of “wacky hijinks” happen. They anger a sky patrol officer, start a bar fight, and sing “Uptown Munk” in New Orleans. Beyond that, the music selection includes “Turn Down For What” as well as a sad attempt from LMFAO to recreate their glory days of “Party Rocking.”

Oh, and Bella Thorne plays a pop star who doesn’t sing or do anything else in the movie.

Miles and the chipmunks continue to hate each other until they’re thrown out of a taxi cab in Nowhere, America. Forced to sleep under a tree, Miles confesses the reason he hates the Chipmunks so much is because they had a father who loved them, and that Miles secretly wished that he was in the chipmunks’ place. Then, the shot pans out and the scene is never mentioned again.

When they finally arrive in Miami, Theodore, a six-inch tall chipmunk, throws himself in front of a car to save Miles. And survives.

Moved to tears, Miles hugs(?) the Chipmunks and tearfully announces that he would be proud to have the Chipmunks as his brothers. Despite everything that has happened in the movie, Dave and his girlfriend end up not getting married, and it’s revealed that all the events that took place over the course of the film were more or less pointless.

“Alvin and the Chipmunks,” while harmless enough (in the sense that it only makes its watchers want to gouge out one eyeball, as opposed to two), represents a sad trend in children’s films: studios think that “children’s movies” is synonymous for “films that require no effort.”

Obviously, six-year-olds won’t walk away from a movie thinking about the lesson learned and the theme. However, it seems like “Road Chip” doesn’t even know if it wants to be a movie aimed at children in the first place. There are some out-of-place references to drugs and alcohol, as well as appearances of singers who were popular with teenagers three years ago.

Another one of “Road Chip’s” greatest flaws is that none of the characters are likable. Alvin is a spoiled, annoying brat, and Simon whines constantly. Theodore is less of a character and more a stereotypical fat caricature who only thinks about food and constantly wants to eat.

“Alvin and the Chipmunks: Road Chip” is not a good movie as it is, and is only recommended if you need something to cringe to.