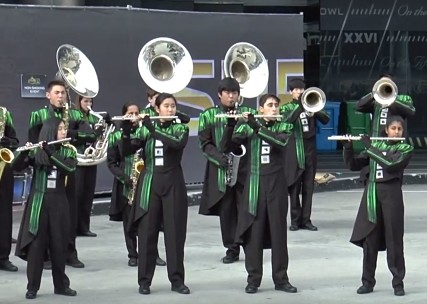 Members of the marching band experienced a once-in-a-lifetime opportunity when they performed at the Super Bowl in early February.

Event planning company Party Planners West invited band director Eric Weingartner to bring up to 100 performers to perform at the Super Bowl and the NFL Experience in downtown San Francisco.

Eighty-five percussion and wind players ended up going to the events — just over one-third of the marching band, with many being upperclassmen and section leaders.

The marching band practiced two hours weekly in the weeks leading to the show, perfecting brand-new tunes and brushing up on football season regulars, Weingartner said.

The band performed three 25-minute sets on the opening day of the NFL Experience on Jan 30. and on the Saturday before the Super Bowl.

“[The NFL Experience] was super fun because it was sold out,” Weingartner said. “There was huge crowds of people, literally people jumping on front of the band and dancing as we were playing, so that helped energize the crowd and the band.”

On Super Bowl Sunday, the band played at the Entry Plaza outside Levi’s Stadium, where thousands of fans spent the day before entering the stadium for the game.

“We were right in the middle of a huge crowd of people – Panthers fans, Denver fans – all really excited for the game,” Weingartner said. “We were just playing a lot of our pep band music, it’s a lot of pop tunes and rock tunes [that] people are familiar with, doing a lot of choreography.”

Senior Jared Baltazar said he felt the experience was a great way to end his years in the marching band.

“It gave me a chance to improve myself as a musician and entertainer and just let loose in front of a crowd of people,” Baltazar said.

Weingartner said the selection of students was made based on their years in the band and dedication.

“It was definitely a really fun experience for me, especially as a senior,” drum major Elad Zohar said. “And having been drum major I didn’t really get a chance to play with the band that much over the past two years, so getting this opportunity to just kind of play and have fun and get that kind of closure I guess, was really fun.”