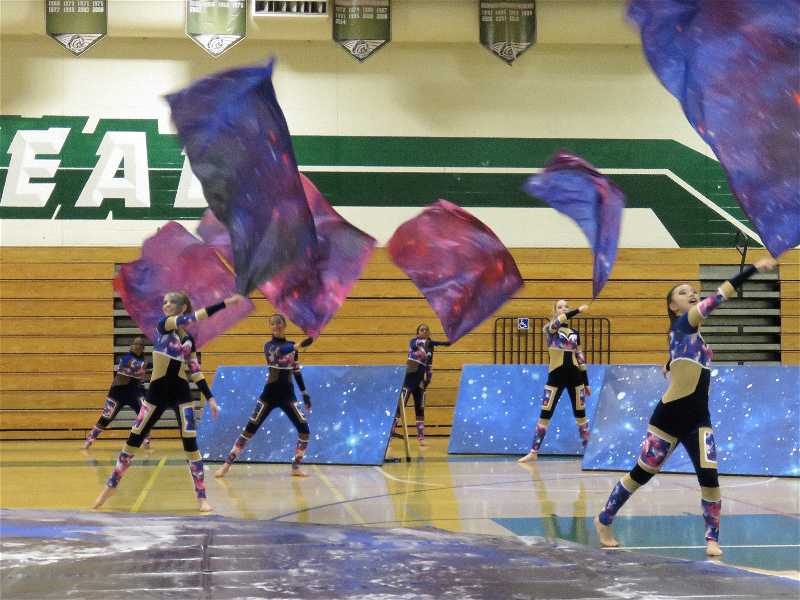 JV and varsity color guard performed their winter showcase alongside the percussion band and the Cupertino color guard on March 8.

The show was filled with an explosively supportive audience of parents alongside fellow marching band and color guard members cheering on their peers, after the performers would catch a flag thrown high into the air.

“I think [the team] did great,” parent volunteer director Lynn Hoefflinger, who manages the organization of props, competitions and volunteers, said. “For winter percussion, this is the first time that they’ve performed the full show, they just learned the last part.”

Home shows are different from competitions, which are scored in front of judges. Hoefflinger said during competitions each team must perform under 11 minutes, which includes setting up and dismantling instruments and props.

“I feel like the home show every year is an opportunity for the kids to really experience performing in a more safe environment with a crowd that will support them no matter what,” Gongwer said.

The show had two parts: color guard and marching band. JV performed their winter ensemble entitled “Seeing Stars,” dressed in nova-colored costumes and wielding giant nova-printed flags while forming synchronized patterns. The performance engulfed the audience in a voyage through the stars and exploration through the galaxy.

The varsity team performed “White Rabbit,” with white and gold uniforms and tree decorations, telling the story of Alice from Wonderland finding her way through the forest.

“We just had the last two weeks off of competition so we spent the last weeks really detailing the entire show,” director Ricky Contreras said.