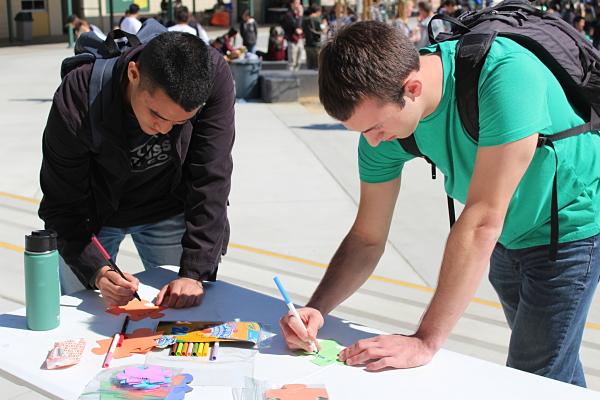 (from left) Seniors Kenta Asai, Prashid Pokharel and Cameron Schindler write on puzzle pieces at the fwd:love table in the quad during lunch.

Throughout this week, fwd:love club organized a “puzzle piece project” where students filled in the blank in the sentence, “I wish my peers knew _____” anonymously on colored puzzle pieces cut out from construction paper.

The club plans to piece together the puzzle pieces into a large poster and hang it on the walls of the C-building, senior club co-president Theodore Tefera said.

Junior secretary Olivia Ling said she initially thought of the idea for the project when she saw a similar project done online.

“We wanted to do a project that brought together the campus and build community within the school,” Ling said.

The puzzle pieces connect together to ultimately show the student body how they are all united as a school, Tefera said.

“We know a lot of people have things going on in their lives that not everyone is aware of, and it just helps people be more aware of it,” Tefera said.

Since the puzzle pieces are written anonymously, it allows students to share insecurities about themselves with other students.

“I thought it was very interesting and it promotes a sense of goodwill and community, and it allows people to share

Many students have written puzzle pieces and agree that the project builds a sense of community at Homestead, allowing students to realize that no one goes through the same hardships alone.

“I think it helps build empathy, because people sometimes forget that other people are going through stuff,” senior Jena Shields said.