The Bar-On Brief: “Every Fifteen Minutes” – Involve me and I’ll learn 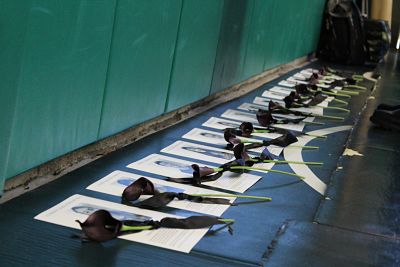 Donald Trump, while campaigning in Wisconsin last week, made a few of his teenage supporters take a pledge:

“I promise Donald J. Trump that I will never take drugs.”

Trump had the teens raise their right hands and repeat after him.

“I don’t wanna say no alcohol, but take it easy on the alcohol,” he added moments after.

In today’s assembly, Principal Greg Giglio alluded to the drinking that will take place amid students come graduation season.

Both Trump and Giglio know banning alcohol among teenagers is not a possibility.

The police cannot enforce the drinking age in private bars that break the law and sell shots to underage drinkers, nor can they make sure kids don’t steal liquor from the cupboard at home.

The reality is many students have direct access to alcohol. Whether it be through using fake IDs, scoring deals with bartenders or stealing from their parents’ stashes, there is no stopping it.

Every person with the slightest bit of intelligence should know that drunk driving, regardless of age, is foolish. Not only can it leave you with hefty fines or book you a ticket to jail, but it can also send you or another person to the grave.

Well, I must take my statement about intelligence back. Flo Rida was arrested for DUI in 2011, Michael Phelps in late 2014 and most recently U.S. Soccer superstar Abby Wambach just last Sunday. These are influential people with what I’d assume is a high level of intellect.

In any case, the police have an obligation to ensure everyone is safe on the road. They carry out their responsibility by enforcing traffic laws and eliminating drunk drivers from the streets, no matter their intelligence levels.

The most effective way for doing so, as the upperclassmen saw these past two days, is through educating us young ones.

The “Every Fifteen Minutes” program, which happens every two years, was presented to the juniors and seniors today and yesterday, including a car accident simulation with familiar faces from the student body. The program reproduced a car crash scene, police and ambulance responses and a memorial service for the student audience.

Since the “Every Fifteen Minutes” began presenting to high schools in 1995, their name has become obsolete.

No longer do alcohol-related motor vehicle deaths take place every 15 minutes, but rather every 36. Society has progressed immensely.

However, there is still work to be done.

According to the Center for Disease Control, a driver will on average drive 80 times under the influence before being arrested. Between 50 to 75 percent of drivers who had their license taken away continue to drive illegally.

Most shockingly, the number one cause of teenage deaths is car accidents, and 60 percent of these deaths are caused by alcohol.

I cannot assert that educational presentation such as the ones we watched these past two days will change anyone’s future actions. But I can assure that they have impacted me and, based on the reactions I have heard around campus, many others in the student body.

Unlike other presentations such as the freshman PE drug prevention unit, sex education in biology or the bullying PowerPoints every student goes through, “Every Fifteen Minutes” personally involved the students.

As the great Benjamin Franklin once said, “Tell me and I forget. Teach me and I may remember. Involve me and I learn.”

Although the moral of the the exhibition was not to drink and drive, the two days were not centered around the drunk driver. They were instead focused on the victims.

Everyone saw the live presentation, heard the ambulance’s siren and listened to eulogy speeches from parents, friends and “dead” students, whom we all recognize and would dearly miss.

The point was not to reform our thoughts into scaring us from being arrested and sent to jail for DUI, but rather to reform our conscious and open our eyes to the innocent people we can harm if we make poor decisions.

Moral of the story: don’t drink and drive.

Just remember that “Every Fifteen Minutes” never explicitly told us not to do so. They instead showed us — that’s what made it so much more powerful.