The Varsity football icon in his own words 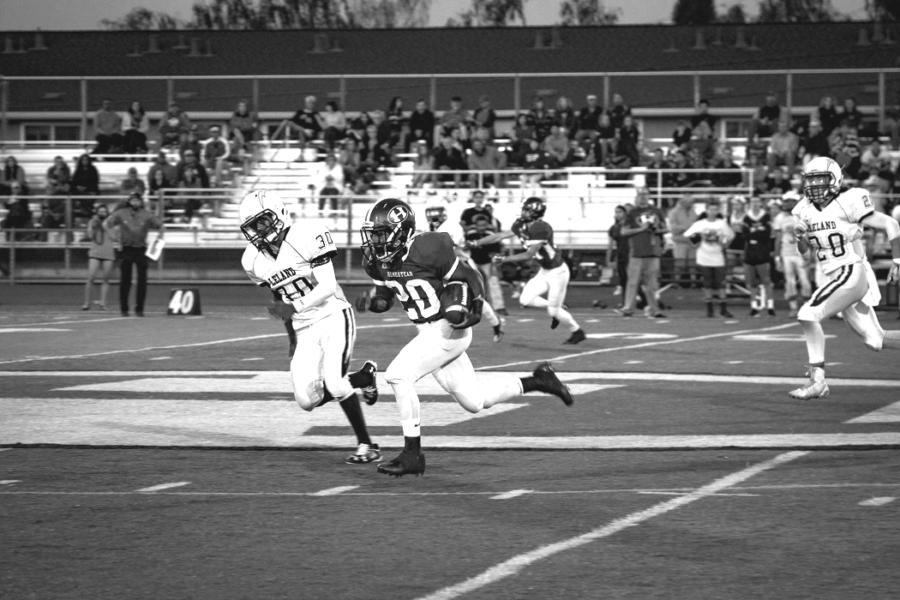 If you’ve gone to any HHS football game throughout the last three years, senior running back Rajah Ward (#20) has probably scored a touchdown in one of them, and that is not an overstatement. Not only is he an incredible athlete who will leave behind a powerful legacy at HHS, his speed and dexterity have set standards across the league.

In the most recent game against Leland on Sept. 2, Ward rushed for 160 yards and had two touchdowns in six carries. In the following game against San Lorenzo Valley on Sept. 9, he rushed for a total of 209 yards and scored four touchdowns, one of which was a 94-yard run. And that’s only two games.

All of his statistics on maxpreps.com are at least twice as high as the national average of his age group, he’s been called “spectacular” by the San Jose Mercury News and he has been named Player of the Match 11 times throughout his high school career.

Here is the transcript of The Epitaph’s interview with Ward, which has been edited for clarity.

The Epitaph: Last year, your average number of yards per game was 118.6, which is almost four times the national average. You’ve made 26 touchdowns throughout your high school career so far. Your average yards per carry is 10.8. How do you do it? What gets you in that jersey before each game?

Rajah Ward: Uh, I don’t know. A little music, some words from [Coach] Milo Lewis, just knowing what I have to do before, a little film study before practice; we watch a lot of films. Coach Milo sets us up beautifully, he’s the one who makes it happen, I just have to run to the end zone.

Ward: My favorite football movie is probably Friday Night Lights, the movie, not the TV show, and my favorite movie all time, uh … Lion King.

TE: Now, I was at the first game [against San Lorenzo Valley] and I noticed that you, your teammates and your coaches are incredibly in tune with each other. You guys have a lot of passion when you play. Could you describe your relationship with your teammates and coaches?

Ward: Uh, me, my teammates, and my coaches, it’s more of a family. We’re not necessarily a team, we’re a family. Now, we’ve been together, most of us, since our freshman year, [and] we never stop seeing each other. The football season, [even] when it’s over, it’s starting again. So, [from] January to June to August, we’re working, we’re talking, we’re training together, we’re watching film, we’re always working out. We just have a strong connection with each other, and everybody knows each other very well. That’s how we have that connection, that bond; it’s because we’re family.

TE: Describe training. What would an ordinary day in training be like? How does training prepare you for the big game?

Ward: Training? You know, honestly, I probably do less training than everybody else because my work ethic isn’t very good. I’m trying to work on it, every day it’s me going to the weight room, hitting biceps, triceps, going out to the field, and running, I run a lot, one hundred yard sprints. I try to get those in every day after practice. I do blocking schemes, I run a lot and I do a lot of footwork.

TE: Now, I believe that at the last game against Milpitas, you scored two touchdowns?

TE: Four! What does it feel like to cross that line into the end zone and have the audience cheer behind you?

Ward: It’s relief. When I run the ball, I feel so much pressure, there’s so much that can go wrong and not much that can go right. So when I finally get across that line and score a touchdown, it’s a big sigh, like I did it, and I look in the stands, I look for my mom, and I look for my dad, and I point. I did that for them, and my teammates. Then I go give Coach Milo a high five, or walk past them, give them a pat on the back and say “Good call.” Then I go to each and every one of my linemen and say, “Thank you, I love you guys.”

TE: What do you consider to be your greatest accomplishment while playing at Homestead?

TE: Do you plan on playing football in college?

Ward: Yes, hopefully, yes. Where? I don’t know, I’m not sure yet. My decisions are just all about keeping track of my grades, making sure that’s good. If that’s not good, I don’t know. But if my grades are good this season, I’m for sure playing in college. The “where,” I don’t know yet.

TE: Alright, here’s my final question. Do you think talent is real? Are people born with the ability to play football like you do? Or do you think running 92 yards for a touchdown against Fremont last year comes with painful, persistent work and training?

TE: Is there anything I didn’t ask you that you want the school to know about you before they see you at the Homecoming football game in October?

Ward: Just come out. Come out and support, we won’t disappoint. Homecoming, we lost last year, I had a pretty bad game, but I assure you, that will never happen again. We will beat Fremont this year.

All statistics courtesy of maxpreps.com