You will be a Phan(tom) of this show

This enticing adaptation will not disappoint and will keep you wanting more. 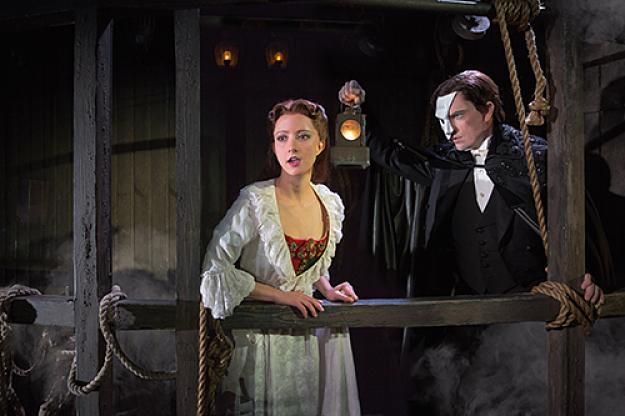 The Phantom and Christine get ready to wow the audience with their stage presence.

As the auctioneer is done selling the last pieces that occupy the deteriorating grand Paris Opera House, he suddenly shifts his attention to the last object that the people have been waiting for. As the covered object hangs tall in the theatre, it slowly lowers for everybody to see. The curious shadows huddle together, preparing themselves.

Just as the object unfolds: shining bright, stunning the audience and cast alike. The legendary chandelier hold its place and stands its rein.

The Phantom Of The Opera has officially begun!

The brilliant adaptation by Cameron Mackintosh originally produced by Andrew Lloyd Webber is a spine chilling production that more than gets the job done. The Broadway San Jose has welcomed the production as part of the new North American Tour. The show will be performed only between  Sept. 15- Oct. 2.

On her rise, Christine encounters a love from the past, Raoul, a handsome suitor to which Christine starts to fall in love with again. The Phantom, who becomes outraged and mad about the loss, begins to terrorize the opera house, but Christine is still interested in the man’s mysterious ways.

Being the first time I saw The Phantom of the Opera, I was compelled by the story and music alike. Anxious and excited, I set my expectations to be pleased, but not wowed in any way. Having seen many plays throughout my childhood, professional and casual, I did not expect much.

To my surprise; I was proved wrong.

The play was magnificently beautiful, down to the elaborate costumes and stunning change of scenery, which kept the audience engaged and allowed them to feel as if they were truly apart of the show.

The story itself is interesting, but the main characters are what really made the show a hit. The Phantom played by Chris Mann, Christine played by Kaitlyn Davis, and Raoul played by Storm Lineberger.

Their voices combined were amazing; the entire cast had a unique aura about them which made me interested to listen and understand what was happening. The transitions to most scenes were absolutely flawless; the way the characters would enter and leave a scene were not only clever, but kept me wondering what was going to happen next which kept me attentive throughout the play.

The Phantom Of The Opera is one of the longest running broadway hits, and I was shown why.

I would overall give this lovely adaptation a solid four out of five stars. The only downside that I could find is that the story tends to shift time frames, which could be confusing to even someone who has seen the play before.

This lovely adaptation will definitely keep the spirit and legacy of the Phantom Of The Opera alive.