Homecoming 2016 wraps with a packed Friday

A rally, parade, football game and dance mark the end of Homecoming Week 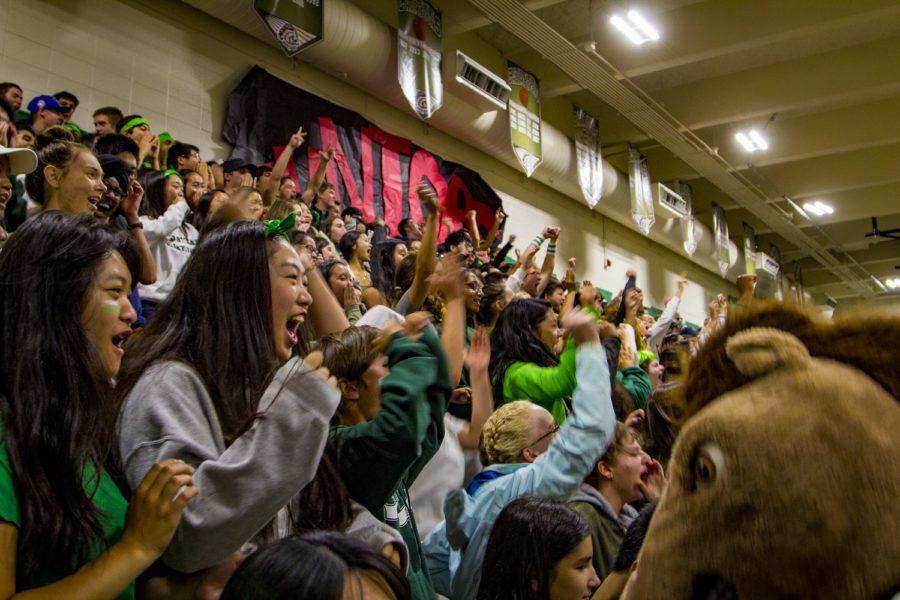 The Class of 2018 participates in rally cheer-off. The juniors later won second place in Homecoming 2016 overall.

After four days of brunch cheer-offs and lunchtime activities, Homecoming day finally arrived last Friday. In place of  tutorial, the Homecoming rally kicked off with a performance by the Marching Band and Colorguard.

“I think our performance was… good, especially the bass drum at the end,” sophomore piano player Sean Chen said.

The rally continued with a performance by the cheer team and the Equestriettes dance team.

For freshmen, this was their first experience with the Homecoming court.

“It’s really cool for them to dress up like that, and it’s really fun to watch,” freshman Leiyonee Bose said.

After the ceremony ended, the rally wrapped up with the presentations of every class’ Homecoming videos, each one themed around both Homecoming and its class’ theme.

“The [freshman, sophomore, junior] videos all had cool visuals, which is a crowd-pleaser. [The senior] video focused too much on story,” senior Homecoming video director Alex Lyon said.

“The seniors’ video was so good,” said junior Austina Wang, who directed the Class of 2018 Homecoming video. “It actually had a story.”

“[The parade] is the most surreal thing about Homecoming because everything comes together at the parade. Just being there, in the car, outside the car, you just feel this kind of magic and this spirit,” Omictin said.

At 6:00 p.m., the Homecoming Varsity football game kicked off under a drizzle. In a close game, the varsity mustangs won 41-37 with points by junior running back Joey Bond-Davidson, senior running back Rajah Ward, senior wide receiver Luke Mujica and junior fullback Andrew Oduor.

“It was thrilling seeing the amount of support and unity brought to the Battle of the Bell game despite the weather,” senior Yu Ying Chua said.

Following the Varsity game, the Homecoming dance took place in the Student Center and Large Gym. There was a photo booth operated by the photography class and Life in Focus photography club and ASB-run food centers offering popcorn, water and popsicles.

“I think that the dance was extremely fun. It was a great start to the dances of the year, and I’m excited to see what other dances are gonna be like,” junior Simon Lee said.