“The Edge of Seventeen”: the most heartfelt comedy of the decade 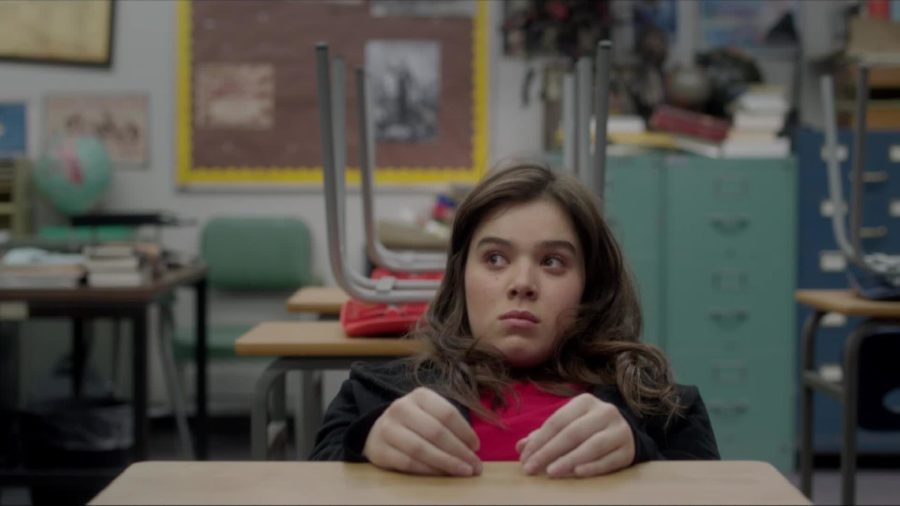 So, the other Sunday I woke up at around 6:30-ish to eat breakfast, which consisted of four bowls of Cocoa Pebbles. A couple hours later, I blew a college interview by yawning during a story told by the interviewer. On the bus ride home, I received an email from my club officer superiors criticizing my ability to plan and lead an activity.

After arriving home, I somehow entered into a screaming match with my parents regarding my academic adventures, both prospective, and bygone. Flustered, hungry and wanting a breath of air, I escaped into the freezing, raining night air at around eight o’clock at night.

I decided to go to the movies, my home away from home, a thirty-minute bike ride away. After having a bag of popcorn and a couple Icees for dinner, I entered showroom four, which was showing the drama/comedy “The Edge of Seventeen,” written and directed by Kelly Fremon Craig. It features an angsty, self-centered teen who bikes everywhere, quarrels with her family and has a negative viewpoint on life, so in a way, it was perfect for my current situation.

The trailer for this film portrayed it as a heartless comedy that aims to marry controversy and teenagers with little heed to understanding or realism. It’s one of the reasons I don’t like “romcoms,” “dramedies,” or coming of age films. In fact, the entire genre’s constant neglect for plot consistency, emotional sincerity and underlying themes time and time again make it a general insult to cinema today. However, “The Edge of Seventeen” proves itself to be an outlier by mastering all the points above in addition to having good dialogue (which is something that the genre needs more of), meaningful correspondence with the audience and fluid character development. There isn’t a single character in the film that you’ll dislike by the ending, because you’ll be able to comprehend their mindsets.

The greatest thing about “The Edge of Seventeen” is that it holds nothing back. It’s rated R, which means that the high schoolers in the film talk like high schoolers. The comedy is realistic (also extremely funny) and the character design is superior to any in its genre. The language aids with expression and depicts a more plausible representation of high school life. Remember all those cheesy films featuring thirty-year-old actors and actresses clumsily portraying teenagers and failing miserably? This isn’t that type of movie.

“The Edge of Seventeen’s” defining feature is its edginess. The screenplay cracks several quips that could be deemed questionable in the eyes of our politically correct world today. But that doesn’t mean that the film is straight-out offensive, it’s just the opposite.

Hailee Steinfeld, a model, pop star and inexperienced actress, does a surprisingly marvelous and intimate job at portraying depression and anxiety through her performance as insecure high schooler Nadine, a girl who feels as if she’s born in the wrong century. Rather than subtlety, Steinfeld aims for the depth and complication of first-world pressure through a unique transparency and profound understanding of the character she’s playing.

Costars Woody Harrelson, Haley Lu Richardson, Kyra Sedgwick and Blake Jenner are all excellent in this film, depicting three individuals who serve as the main character’s deterrent and (in the end), educators. One of the most unique things about “The Edge of Seventeen” is that it doesn’t overly exalt its main character as a moral beacon. Nadine believes that she is the only one with problems, that nobody will ever understand her struggles and that nobody understands what she’s going through, all of which are simply untrue. The pragmatism, genuinity, superior acting and clever writing of this movie is what earned it a 95% rating on Rotten Tomatoes.

As a coming of age, the plot is riddled with cliches; you can probably predict everything that’s going to happen once all the characters are introduced. However, just like the extremely well-done 2015 hit film ‘Star Wars Episode VII: The Force Awakens,’ ‘The Edge of Seventeen’ nails every single cliche and in the process, it reignites the fervor for originality and depressed teenager movies, raises the bar even further for films like it (most of which are terrible romcoms) and invents a new genre of movie: the R-rated coming of age film.

Most importantly, “The Edge of Seventeen” was made for everyone. Whether you’re a parent, teenager, student, teacher, or movie critic, you will all find enjoyment in watching this film, and it will probably serve as a highlight of 2016. It did for me. “The Edge of Seventeen” is heartfelt, ingenuous, funny and nuanced. As a high schooler and a generally depressing dude, I applaud director Kelly Fremon Craig for taking risks, doing her homework and being creative, because those are what movies are about, and those are what make movies great.