The Reel: “Shrek” and the genius in satirical filmmaking 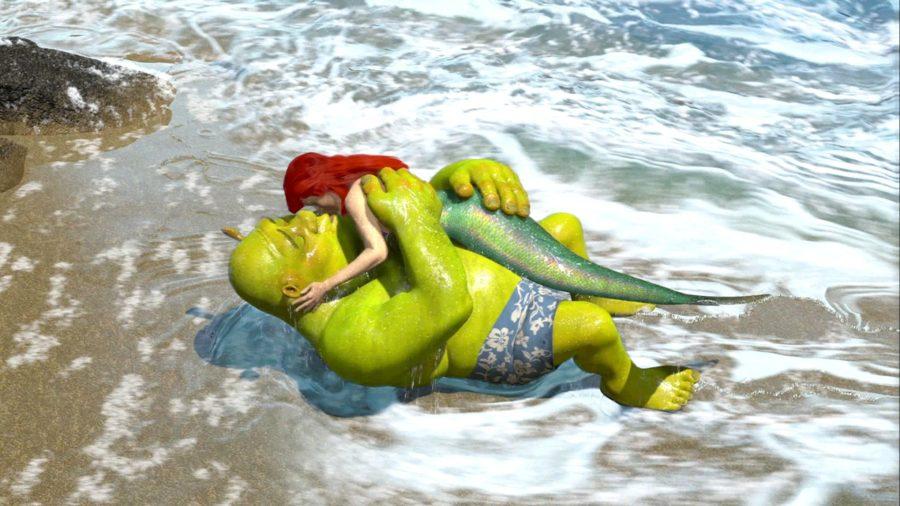 Here, Shrek accidentally ends up kissing Ariel from “The Little Mermaid” on his honeymoon with recent wife Fiona in “Shrek 2” (2004). Fiona reacts by grabbing Ariel by the tale and throwing her back into the ocean, to the sharks. (Photo courtesy of Dreamworks Pictures)

Let me ask you a question: What is your favorite animated film? If it’s from the 21st century, then you have a certain movie to thank.

The masterpiece of modern-day animation is the first “Shrek” film due to its audacious portrayal of the polar principles expressed by fairy tales and their perfection-bearing princesses, princes, handsome elves, monstrous ogres, a wolf pomping every masculine feature possible and old fairy godmothers before it.

The 2001 animation film turned the industry around, forcing all animated films to follow a more realistic path closer to modern society, and inserting a little bit of satire into each film. For example, look at “Zootopia” and tell me it’s not a partly satire film. Look at “WALL-E.” Look at “Monsters Inc/University.” Look at “Cars.” Look at “The Incredibles.” All of them take a hard look at the genre they are mocking yet somehow still manage to craft a fictional story worth watching.

Now, satire is a weird theme upon which to create a movie. A good satirical film will be brilliant, but a bad one will be forgotten. Several amazing satirical features include Stanley Kubrick’s “Dr Strangelove” (1964), Sam Mendes’s “American Beauty” (1999), Jay Roach’s “The Campaign” (2012) and “American Psycho” (2000).

But what makes “Shrek” so important? Prior to the new millennium, animations (seen as entertainment for children) generally set a stage of imagination for the kids centered around a structure containing elements of extreme proportions and perfection, whether it be a flawless princess, a handsome prince, a villain driven by pure evil and little backstory (Gaston from “Beauty and the Beast,” Scar in “The Lion King,” Shere Khan in “The Jungle Book,” etc.) and the use of language and character development, unrelated to the perils of society or even current times. It served mostly as a way for children to dream or imagine, not to contemplate.

The success of “Shrek” introduced the children who had grown up with the genre as kids to the real world- through the eyes of an unattractive but loveable ogre, not a handsome blonde knight, who must go save a princess from an overly nefarious castle, surrounded by a lake of lava, with a lone wooden bridge, guarded by a dragon that turns out to be a) female, and b) in love. Essentially, the movie completely mocks the dreamy and unrealistic proportions of the fairy tales preceding 2001.

This is the brilliance in the storytelling of “Shrek.” It aims to take down the mystical standards set by previous films and say, “Hey, look. This is how the world is, full of flaws” while employing funny dialogue, a romance storyline unprecedented by standards then, an ogre and donkey instead of a knight and his steed, iconic fairy tale landmarks (ex: dwarves, wolf and pigs, Pinocchio) that the audience can connect to and finally (and most importantly), a powerful narrative about imperfection, love and self-acceptance.

I mean, let me just describe a couple scenes from “Shrek,” and you can derive their significance on your own. An ogre wiping with a page out of a fairy tale novel (that could not be more obvious), a donkey saying, “Well I like you” to an ogre who thinks that nobody likes him because he’s ugly, Geppetto selling his son, Pinocchio, for a couple shillings, the wolf that “huffs and puffs” turning out to be a transsexual, and a culmination of fairy tale creatures that would otherwise be 2-dimensional cartoons, depicted by purposefully crass animation.

Another scene? Fiona turns out to be part ogre, cursed at birth. She’s embarrassed by how she turns out, and it’s only when she’s kissed by her true love that she can turn into a human forever. But when Shrek kisses her at the end, she instead turns into an ogre- not what she wants. The line, “Something’s wrong. I’m supposed to be pretty” by Fiona, followed by a “But you are pretty” from Shrek is a) an absolutely tear-jerking moment in movie history, and b) an audacious jab at the perfection demanded of young girls in society.

This nuanced rumination of society and challenging of the norm is what makes “Shrek” so revolutionary and heavy for its genre. It’s also why it’s so memeable, but that’s not the topic.

Its sequel, “Shrek 2” (2004) moves even closer to modern society (taking on numerous societal predicaments including racism and classism), its values (especially prejudice and change) and its participants (worker unions, celebrities, pharmaceuticals, television) while maintaining its steady and iconic assault on fairy tale cliches that only strengthens its resolve. The villain’s pub, “The Poison Apple”? Absolutely genius. Prince Charming turns out to be a bratty and spoiled momma’s boy? Brilliant. The Hollywood sign mock of the kingdom of “Far Far Away”? Right on the money. Jennifer Saunders’ cover of “I Need a Hero”? Unrelated, but so, so amazing.

There isn’t enough room here to explain the brilliance of the Shrek films, but I urge you to watch them once again, with mature eyes this time.

Satire isn’t the only merit that the “Shrek” movies have. They also manage to incorporate the essential plot force that most animated movies aside from that of Disney/Pixar fail to take into consideration: meaningful conflict. Here’s an example. Why was Fiona locked into a tower? Her father (the frog from “The Princess and the Frog”) was cursed himself, loved and accepted by his own queen years ago. He enters conflict with Shrek for the same reason, but ultimately, this is how the two bridge gaps and find solitude. Another important element of this is his daughter, Fiona showing the king as loving, imperfect (the king being imperfect is powerful), conflicted and above all, human. That’s what you call good storytelling.

What I want you to take away from this column today is the significance of the film that woke up Hollywood’s animation industry and brought it closer to the world we live in, filled with the children who grew up on fairy tales and Prince Charmings and magical animals. Remember that life isn’t a fairy tale, that there are imperfections in this world and that self-acceptance is the key to happiness.

A parting gift from me to you: the lyrics to the “Fairy Godmother Song” from “Shrek 2” (2004) from Fairy Godmother to Princess Fiona, the ultimate tune of anti-fairy tale rhetoric, sung by the talented Jennifer Saunders, who voices the fairy godmother- see if you can find any interesting parts.
Your fallen tears have called to me

So here comes my sweet remedy

With a flick of the wrist in just a flash

you’ll land a prince with a ton of cash

A high priced dress made by mice no less

Some crystal glass pumps and no more stress

Worries will vanish your soul will cleanse

Confide in your very own furniture friends

The kind of gal a prince would date

They’ll write your name on the bathroom wall-

“For happy ever after- give Fiona a call”

A sporty carriage to ride in style. A sexy man-boy chauffeur Kyle

Vanish your blemishes, tooth decay cellulite thighs will fade away

A hool and a hey, have a Bichon Frise

Nip and tuck here and there, to land that prince with the perfect hair

Lipstick liners, shadow blush to get that prince with a sexy tush

For the lipstick a roll in the hay

Don’t be drab, you’ll be fab

Your prince will have rock-hard abs

Have some chicken fricassee