“Hidden Figures” shoots for the stars

A new movie to empower a new generation 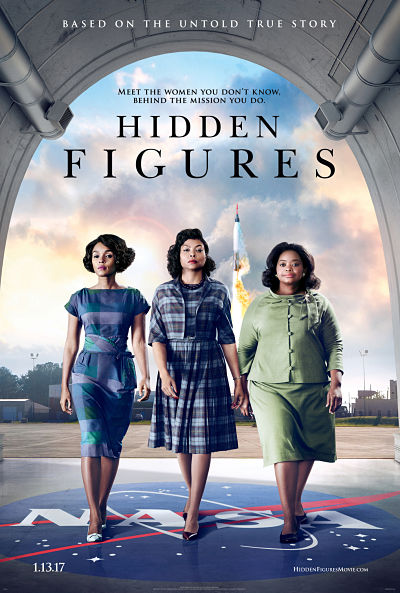 “Hidden Figures” is about three black women who fight against adversity as they prove themselves to be some of the smartest minds at NASA. Photo Courtesy of 20th Century Fox.

In 2011, we watched “The Help,” a movie about a white author in the midst of the Civil Rights era who decides to write a book about the African American maids and their views on the families they work for. In 2013, “12 Years A Slave” hit theaters and shocked its viewers with its depictions of black slavery. Since then? Not much. Racial diversity in movies is still a problem, and the problem gets worse in historical movies.

But finally, in 2017, we have received a blessing: a movie that portrays black women as neither maids nor slaves, but instead as scientists.

“Hidden Figures” is a triumph in face of the current political climate in the United States. It is first about the the struggles these black women face in a time when everyone is against them. Everything else that comes into play is second to the empowerment of women, one of the most important messages given to the audience.

The movie is about three black women who are mathematicians that work for NASA during the space race with Russia. The women attempt to fight racism in their workplace all while trying to send a man up to space.

Based on a true story, “Hidden Figures” has three main characters: Katherine G. Johnson (Taraji P. Henson), Dorothy Vaughan (Octavia Spencer) and Mary Jackson (Janelle Monáe). Taraji P. Henson is most well known for her headstrong character Cookie Lyon on “Empire”, and I was taken aback by how believable she was as a quieter and meeker Katherine. Janelle Monáe, known as a singer and not an actress, gave a great performance as the funny and determined Mary. Octavia Spencer’s acting made me feel like she was born for the role of Dorothy, a strong woman who speaks her mind.

In the movie, Katherine is put on the Space Task Force and must come up with the math to help the first American man go into space and come back alive. Mary struggles to become the first African American engineer arise when her peers seem to be against her. Dorothy attempts to stay useful in the wake of a new machine that could do the math that she’s been hired to do in a second. Each character’s life is developed wonderfully throughout the movie, and potential romance never interferes with the plot. It’s a clear message: women can have lives outside of love and romance. And these women do.

All three of the women are incredibly smart. It’s refreshing to have a plot where independent, smart women aren’t stuck in the common trope of hiding their intelligence to make others feel better. Nowadays, it’s all too common for a smart woman in a movie to be ashamed of her intelligence or even be depressed because she’s smart, yet single and alone. Not these women. Their emotions were written realistically, and they didn’t let anyone stop them from shining. The mathematical knowledge  that Katherine, Dorothy and Mary had blew my mind. They all knew what they wanted, and they reached for it.

The movie takes place in the Civil Rights era, and the screenwriters make sure we know. “Hidden Figures” is sprinkled with scenes that show the fight against racism. In one scene, a peaceful protest is shut down by the police. In another, Mary’s frustrated husband watches Martin Luther King Jr. on the news. “Whites only” and “colored” water fountains are shown clearly.

Through all the struggles these women face, not just because they are women but because they are black, “Hidden Figures” is unabashedly political. It shows Katherine, Mary and Dorothy as human, and as equals to any other white person working for NASA. The small biting comments about their race that they must take politely will make you scream in frustration. And then you’ll stop, but only to realize that you read a tweet the other day that had a similarly racist and condescending tone. Nowadays, “colored” and “white” bathrooms don’t exist. But the belief that non-white people are inferior still exists in our culture. “Hidden Figures”  helps reveals this.

The screening of the movie that I went to was completely packed. In the movie, there’s a scene in which Katherine is finally viewed with respect on the Space Task Force as she does the math for the Friendship Seven’s landing. The theater began to clap, I joined in. Due to the noise, I was unable to hear the next few lines that Katherine said, but it didn’t matter. What mattered was that a smart, strong black woman could fight against every single obstacle and achieve her goals.

And in that theater, we knew that it could happen to us and to anyone in real life too, as long as we had role models like Katherine G. Johnson, Dorothy Vaughan and Mary Jackson.