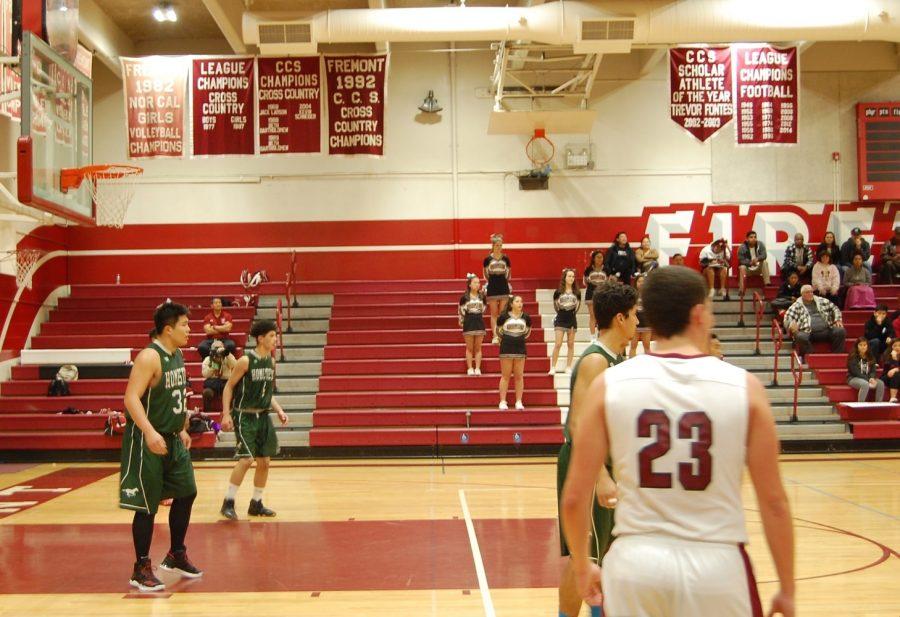 Homestead's win over Fremont was their fourth league win`

he boys varsity basketball team collected their fourth league win Friday, Jan. 20 against FHS. Senior Tyler Liston, center and power forward, said prior to big games coach Shawn Hook does not have the boys practice for a specific team, but more for a specific play the other team might run.

Prior to Friday, junior guard Eric Sathy said, “If we play our game, we should be able to win.” Luckily, the team did just that.

The first quarter of the game started off quite slow with the first score being a three pointer by FHS at 6:25. After a few missed free throws from FHS and a blocked lay up by junior Joshua Anderson, the score remained 3-0 at 3:38. Junior Brendan Kane drove to the basket and completed a layup, HHS’ first score of the game, making it 3-2. After a couple more two pointers by FHS, HHS followed 7-2 with 1:30 left in the quarter. HHS’ first three pointer of the game came from junior Eric Sonobe, making the score 7-5. Following more layups and free throws from both teams, FHS lead 9-7 at the end of the first quarter.

The second quarter started off with a quick foul against HHS which allowed FHS another free point from a free throw. Junior Justin Yi blocked a shot but fouled the shooter, allowing for more free throws to make the lead 12-7. Succeeding three missed shots by HHS, junior Eric Sathy managed to make a tough two pointer while falling to the ground, making the game 13-9. Followed by a turnover by FHS, Kane made a three pointer with 4:45 left in the quarter. Another turnover by FHS allowed HHS’ 42, Jacob Larry, to complete a layup, giving HHS the lead, 14-13. After some more free throws and a three pointer from HHS’ number 2, Eric Sonobe, HHS ended the quarter leading 23-18.

During the third quarter of the game, HHS’ offense really heated up and allowed for a large lead. More two pointers and free throws gave HHS a ten point lead with 5:10 left in the quarter. Following some blocked shots by HHS, Sathy sunk a three pointer which gave Homestead a 13 point lead with the score 33-20. After some free throws and turnovers, it seemed that FHS was managing to come back, yet more two pointers by Larry and Yi pushed the score back up to 39-27 with 37 seconds left in the quarter. A five second violation by FHS and weak ball handling by HHS ended the quarter at 39-27.

The fourth quarter started off with some quick shots by both sides, making the score 43-30. Following free throws by both teams, Kane made another three pointer and made the score 48-33. After back and forth shots, two HHS turnovers allowed FHS to gain some more points, however the score remained in HHS’ favor at 52-39 with 2:00 left. A couple last two pointers by Larry and Sonobe ended the game with a score of 58-39. The next game against FHS will be a home game on Feb. 10.

As far as postseason goes, the team has already earned themselves a spot in CCS, and Sathy hopes to get “at least two or three games out of it.”