Not as out-of-this-world as expected

“The Space Between Us”: a teen romance with cosmic twists 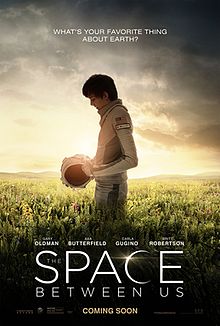 boy who was born and raised on the red planet gleefully eating a Mars chocolate bar is not the only quip that sticks in your mind after watching, “The Space Between Us.”

The sci-fi romance film teens across the country have been waiting for was finally released on February 3.

The movie follows the story of main a 16 year old boy named Gardener Elliot (Asa Butterfield), whose mom was an astronaut and died during childbirth shortly after landing on Mars. Gardener was not allowed to return to Earth once he was born due to the difference in gravity negatively impacting his brittle bones and enlarged heart. As a result, he was to grow up and live in the East Texas settlement on Mars, with his only visible friends being numerous astronauts, a robot and Tulsa (Britt Robertson), a girl on Earth in which he communicates with online.

However, 16 years later, with some intense training and one surgery, he is given the chance to return to Earth with Kendra (Carla Gugino), an astronaut and motherly figure in Gardener’s life.

This is where the real journey begins: Gardener is eager to discover all the aspects of Earth he has only imagined about, with the main intentions of finding his father alongside Tulsa. Yet, his exploration is constantly interrupted by those who are chasing him, in efforts to warn him about the dangers that the atmosphere has on his expanded heart.

This movie was definitely not the kind that gives away everything in the trailer. After watching the preview
for the film, one can assume that the plot primarily surrounds a love story of two people from different worlds. But in reality, the movie mainly consists of Gardener’s mission to find his father, merely accompanied by his relationship with Tulsa.

Director Peter Chelsom did an astonishing job in creating authentic scenes featuring the natural beauty of our world, making the audience feel as if they were seeing Earth for the first time right beside Gardener.

The characters throughout the film vary in development. Gardener’s awkwardness and comical personality increasingly persuades viewers to fall in love with him. However, Tulsa’s background and personality are somewhat cliche, involving the common story of bouncing around foster homes and acting as a rebel with a hidden sensitive side.

The movie can be considered unique in the scientific and space aspects, but despite this, the plot lacks the flow and sparks that it needs to keep the audience entertained throughout the duration of the film. It displays event after event with abrupt transitions.