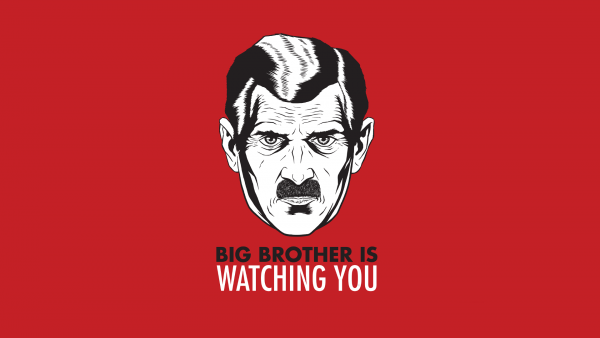 In the time of Trump and “alternative facts,” George Orwell’s dystopian masterpiece “1984” becomes timelier than ever. (Graphic courtesy of Virgin Films)

My all-time favorite book is George Orwell’s 1949 dystopian novel, “1984.” Several Reddit goers recommended it to me when I was in the ninth grade, in the subreddit r/books. The book takes place in a dark, dubious vision of England in the year 1984, when giant screens spew propaganda and cameras everywhere see all. The entire Western hemisphere, or “Oceania,” is run by a tyrannical autocrat “Big Brother” and his Party. Freethinking is now outlawed, dubbed “thoughtcrime,” enforced by the Thought Police, who see all, hear all. Historical facts are manipulated, erased, and metamorphosed as if they were fiction. The main character, Winston, who experiences flashbacks to the past times when he could think and speak freely, works at the Ministry of Truth, an organization that’s responsible for rewriting history books, historical documents and meticulously stuffing press articles with falsehood. Secretly, he illegally keeps a diary (an act of “thoughtcrime”) to remain human.

A couple of weeks ago, I wasn’t surprised to hear that “1984” sales went up by several hundred percent in light of President Donald Trump’s first few days in office. The book’s reminiscent dialogue of the authoritarian tendency to despise and alter facts in order to supply their mission for power is, after all, what makes the book so profound and timely.

So, I picked it up again and reread it. The main reason “1984” relates so well to America’s current situation is its historically-inspired rumination on “facts” and how dangerous they can be to the narrative of the insecure autocrat.

The string of fake news prevalent during last year’s presidential campaign is understandable. Normal people conjure their own lies that reasonable people can then reject. But an abled governing body with influence and power perpetuating these false facts, manufacturing their own falsehoods and/or deeming legitimate news and statistics to be “fake” is both frightening and inadmissible.

Justifications for the Trump administration’s policies are built on a flimsy platform with a broken leg and too many loose screws. And it’s not just that. Trump has, repeatedly, for over a year, vocalized and Tweeted falsehoods to boost his own campaign and ego. Since 2012, he’s perpetuated the birther movement. He suggested that Ted Cruz’s father had a role in killing JFK. He stated that a rally stage-rusher had ties to ISIS when the stage-rusher, in fact, did not. Trump’s defense was “Now, I don’t know. What do I know about it? All I know is what’s on the Internet.” His PolitiFact scorecard has rated a total of 69% of his statements as ‘false,’ ‘mostly false,’ or ‘pants on fire.’

And it wasn’t just on the campaign trail. Trump’s transition team prior to and administration as of Jan. 19 have done plenty to skew the integrity of the White House. It all started with Trump suggesting that upwards of three million people voted illegally to win Hillary Clinton the popular vote in an effort to legitimize his own presidency, a claim for which neither he nor any proliferators of the myth provided any remote level of evidence.

So why do people believe anything that comes out of the White House? The answer is politics. There’s a certain phenomenon that occurs when a lie conforms to one’s political views that encourages blind partisanship and support for the liar. POLITICO puts it like this: “If false information comports with preexisting beliefs—something that is often true in partisan arguments—attempts to refute it can actually backfire, planting it even more firmly in a person’s mind.”

Then, the Trump administration started again. On Jan. 21, his first day on the job, White House Press Secretary Sean Spicer launched into a disturbed rant about the media’s negative attitude toward Trump’s presidency, rambling on about an inauguration crowd, claiming that it was the largest inauguration audience of all time. Spicer followed up by spewing forth a thorough criticism of the media’s lack of enthusiasm and efforts to suppress the “enthusiasm” of the ceremony. The monologue contained plenty of lies. However, I don’t want to get too in-depth about it, since you’ve probably lost interest at this point. However, Slate did a detailed report on all of Spicer’s falsehoods, here. (Recently, Spicer also falsely accused Iranian forces of attacking a U.S. Navy vessel.)

A couple days later, Trump adviser Kellyanne Conway appeared on NBC’s “Meet the Press” following a media vs. White House bash on the inauguration crowd and attempted to defend Spicer’s lie-filled rant by reframing it a presentation of “alternative facts,” prompting outrage, laughter, a sour reaction from Chuck Todd and Internet meme creation. Recently, Conway brought up the Bowling Green, KY Massacre (a shooting that never happened) in defense of Trump’s immigration ban during an interview with Chris Matthews of MSNBC.

With Spicer’s bizarre press conferences and Conway’s barbaric TV interviews , among many, many others (and now, Stephen Miller), it’s evident that the Trump administration’s ultimate goal is to defend the ego and constant mistakes of the head of the executive branch who, with all his executive orders and phone rants against world leaders (Mexico, Australia), has eradicated all human decency and truth from democracy.

I’m not as outraged as I should be. I’m numb. But one event a couple weeks ago (and the lie that followed it) triggered me into full snowflake mode.

On Feb. 1, Trump, according to Reuters, had approved a counterterrorist operation “without sufficient intelligence, ground support, or adequate backup preparations,” leading to the death of a Navy SEAL, William Owens. Spicer said that the mission killed 14 al-Qaeda militants, although medics who buried the bodies counted close to 30, which meant that there were further casualties (unless Spicer lied yet again). Two days later, on Feb. 3, the U.S. Central Command released a series of video clips that were supposedly of the raid on an al-Qaeda compound in Yemen. Problem is, those clips had been online for the last ten years, according to Politico.

It seems that every other day, the White House is showered in media controversy for giving out a new falsehood or baseless claim, which should bother the nation much more so than it currently does. Something ironic I’ve noticed is that despite being egregiously conservative in policy, the Trump administration enjoys itself an extremely liberal stance when it comes to honesty and integrity.

An Association for Psychological Science report states that if repeated enough times to a politically conforming audience, lies become true. And that’s frightening. If something doesn’t portray Trump in a positive lie, he will delegitimize it through tweet, speech or even tangent during a Black History Month tribute, and half the nation will agree with him.  A couple days ago, he tweeted out “Any negative poll is fake news,” easily the scariest expressions of his presidency thus far.

Trump likes to call CNN “Fake news.” I’m not the biggest fan of CNN, but they are absolutely not fake news, even if they mistakenly use a Fallout 4 screenshot as the backdrop of a hacking story every now and then. Deeming legitimate news productions as “fake” while then migrating to the right-wing Breitbart, the infamous InfoWars or Fox News is infantile and plain wrong for a leader of the free world who must remain considerate. It’s one thing to make mistakes; it’s another to fabricate them.

It’s perfectly fine to interpret a fact with a certain perspective and see different implications. It’s perfectly fine to disagree with someone. But willing to undermine the sanctity of reality, disagreeing with a well-accepted fact itself without sufficient support or conjuring up a statement with no evidence to produce for it is irresponsible and foul.

Facts are important. Facts are needed for a democracy to function properly. Millions cannot express educated opinions if facts are skewed or purposefully altered by the government for the advancement of a regime. I don’t know about you, but I don’t want to live in the world of “1984.” America is a Republic, not an autocracy. Trump’s regime has already begun its process of destroying what America stands for with Stephen Miller, a White House advisor, who recently said the following on Face the Nation: “Our opponents, the media and the whole world will soon see, as we begin to take further actions, that the powers of the president to protect our country are very substantial and will not be questioned.”

I want to end on a positive note, and it is this: the Donald (or the people pulling his strings) cannot proliferate falsehoods while Congress and the Judicial branch stand by. Just a few days ago, ninth Circuit judges temporarily blocked Trump’s executive order to ban refugee admission for 120 days, Syrian refugee admission indefinitely and immigration from seven Muslim-majority countries. This shows that yes, other branches of government do give a damn.

Remember the words of James Madison: “Ambition must be made to counteract ambition.” The press, the rest of the federal government, state governments, city governments and most importantly, WE must throw all of our efforts against this untruthful loser of a president who thought that the raid on a Yemeni al-Qaeda compound was a success, that his inauguration crowd was the largest in history, that “all negative polls are fake news.”