From my POV: Down in the dumps 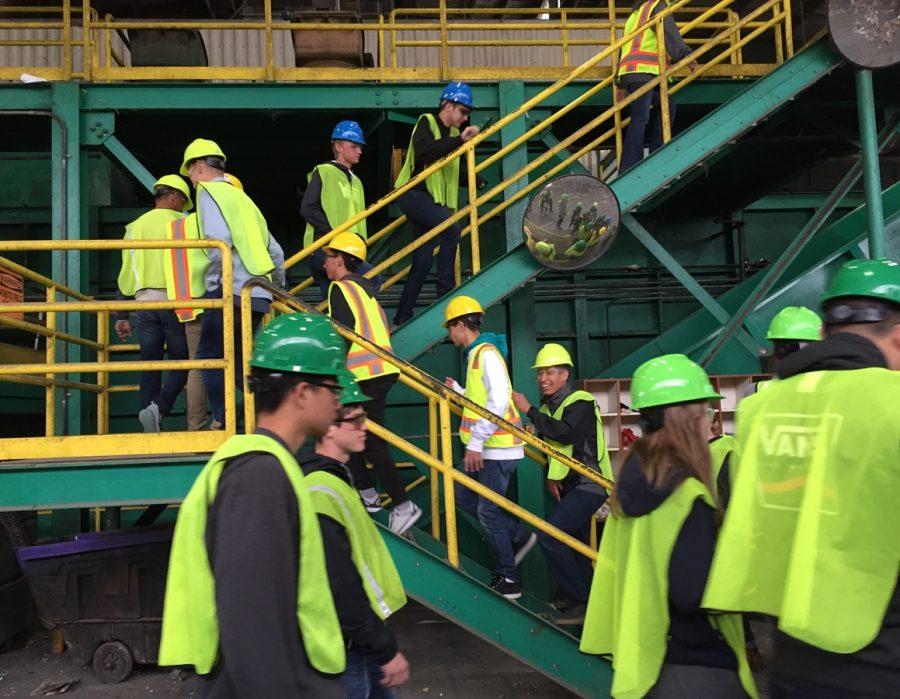 APES students get a tour of SMaRT facility

I
nstead of going to class this morning, I saw a herd of goats grazing peacefully on a hill. It may have seemed cute, but the grassy hillside was covering something people don’t normally think about: the trash they created.

As part of the AP Environmental Science class, I was lucky to go on a field trip to LinkedIn’s Net Zero Energy building as well as SMaRT Station, our local waste management system in Sunnyvale.

The class made a short stop at LinkedIn and it’s Net Zero Energy building. The Program Manager of Global Environmental Sustainability, Peggy Brannigan, led the tour and described how the company had recently installed solar panels and sky lights to save on energy bills.

Brannigan described how the building will hopefully create as much energy as it uses by the end of the year. The building has already taken innovative steps to saving energy, by installing LED lights and large industrial HVLC fans called Big Ass Fans which help to heat as well as cool the building.

Students filed inside to take a look at the fans as well as the skylight above and ask questions, while meeting other engineers who worked at Linkedin.

After visiting Linkedin, the class went to the SMaRT Station; a very clean waste processing plant, surrounded by beautiful grassy hills, all of which hold mounds of trash.

The goats I saw were acting as green lawn mowers for the SMaRT Station. They add natural fertilizer to the hills, and act as a cheaper method of mowing. Gas powered lawn mowers would be dangerous to use since the landfills may have leachate, contaminated toxic waste water and natural gases from fermentation process. If these came in contact with gas, it may result in a fire.

The students were able to visit the dumping sites where people can bring their garden trimmings and household waste, also known as municipal solid waste (MSW).

“The amount of trash we produce surprises me and witnessing these workers hand picking the trash surprises me,” junior Winnie Zhu said.

It’s true; many people don’t know the real cost of what they throw away. Space is running out for our trash, and the Sunnyvale landfills cannot hold anymore waste. APES students were startled by what they experienced at the waste processing plant, and it wasn’t just the smell.

“It was really eye-opening to see how all the trash we produce individually adds up, and that we all contribute to this issue,” junior Erica Payne said.

The SMaRT Station has 7 trucks which are sent out daily, making 2 to 3 trips to and from the facility. They return with 4,500 lbs of trash each day which is then sorted by workers, who hand pick certain materials such as plastics or paper. The trash bags will be torn apart by machines and the contents are spread out on conveyor belts for workers to sort and find plastics and paper.

Yard trimmings were tossed into a giant pile, and workers would feed the branches into wood clippers. The huge mound of organic material was already composting, compacting heat and creating steam which released in clouds at the top of the pile.

It may seem gross, but most of the waste in the facility was on a safer journey back into the environment. Electronic waste and plastics are shipped to China, while the rest of our garbage is sent to be buried in southern California.

SMaRT doesn’t burn any of their MSW, which would release harmful carcinogens and toxins into the air. They also recycle energy from existing nearby landfills, by harvesting natural gases in the hills and using it to power the water pollution control plant.

The workers at the facility encouraged sorting curbside trash before sending waste away. On our way out, I looked at the goats sitting on those green trash hills. A greener future is possible.