The American health scare of 2017 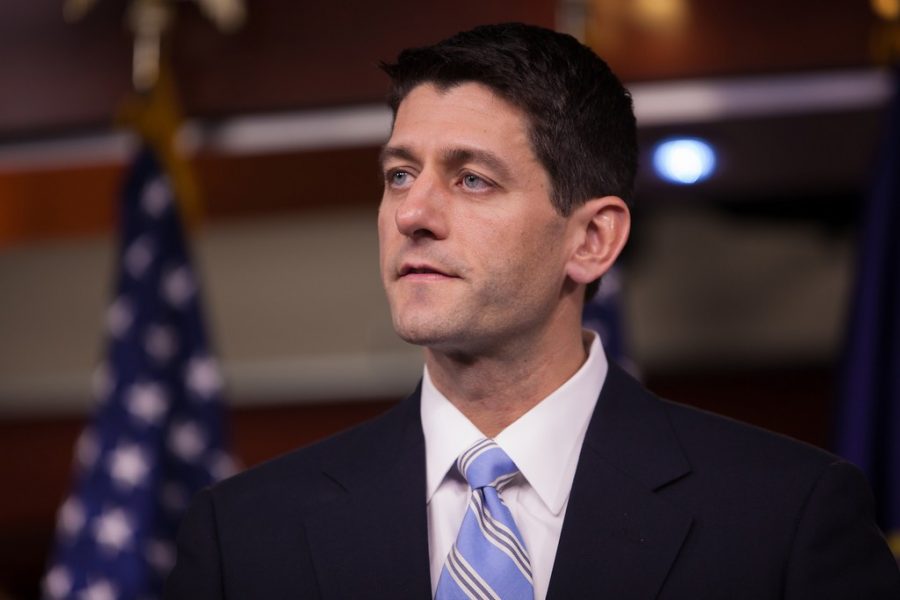 Speaker of the House Paul Ryan oversaw most of the drafting of the American Health Care Act, the Republican repeal and replacement of President Obama’s Affordable Care Act, a bill that was pulled from schedule by House Republicans on Mar. 24. Photo by Jeff Malet/PBS

Healthcare. It’s such a simple word, yet an extremely complicated concept, especially in a country filled with hundreds of millions of people from all classes of society. The term refers to the government-assisted coverage of Americans on monetary expenses relating to health, also referred to as government-assisted health insurance.

According to Gallup, the majority of Americans, including myself, agree that the government should somewhat cover healthcare costs for Americans who aren’t able to afford them. After all, most cannot afford to pay thousands of dollars in medical expenses for each bone they break.

Before I start, I just want to establish that healthcare is a vastly complicated topic to cover thoroughly, and I only get a couple hundred words. So, I will only be covering two things: tax subsidies and insurance plan copayments, both of which center around the changing cost of insurance.

President Obama’s Affordable Care Act (ACA), also known as Obamacare, provided various solutions to the issues plaguing American healthcare pre-2010, such as coverage for pre-existing conditions (example: genetic illnesses that wouldn’t be covered under conventional workplace insurance plans), as well as expansion of the Medicare (government insurance program for the old) and Medicaid (same as Medicare, except for the needy) programs.

On Mar. 6, House Republicans unveiled their long-awaited repeal and replacement of Obamacare, called the “American Health Care Act of 2017,” or AHCA. As expected, the bill would keep the popular parts of the ACA, such as coverage for pre-existing conditions and issuance of government subsidy money. However, there are also huge changes that are not very attractive. Many conservatives saw the AHCA as just a worse version of Obamacare.

For one, government tax credits under the GOP healthcare plan would be issued based on age, not income, to compensate for the anticipated premium increase for elderly Americans, a system whose stupidity speaks for itself. These tax credits are “fixed,” which means that they are based on little to no relation to premium prices at all in the marketplace, and according to the Wall Street Journal, this amounts to almost nothing beyond implementing a giant tax cut for the rich and making insurance less affordable for older Americans ineligible for Medicare.

After clearing the House Budget Committees, House Majority leadership pulled the bill from the voting schedule after it became known that nearly 40 House Republicans planned to vote against it. The GOP holds a majority in the House and could only lose around 25 votes

But why do Republicans despise the Patient Protection and Affordable Care Act, so much so as to want to both repeal and replace it?

The main concerns regarding today’s health care system are the rising premiums (the amount the insurance holder would pay for insurance before providers gave any money) and deductibles (the amount of money an insurance holder would pay for their health care costs before insurance coverage would be involved), among other copayments. Members of the GOP in both houses of Congress have been complaining for years about rising premiums, deductibles, copayments, etc. for those who weren’t insured under government-subsidized plans as a result of Obamacare.

The ACA had this infamous thing called the individual mandate, which forced uninsured peoples to sign up on healthcare.gov, or else pay a penalty. The mandate’s purpose was to make sure that, in the pool of those paying for government-assisted insurance, a sufficient amount of healthy people were steadily paying for insurance to balance out the sick people whose insurance was actually costing money. A steady balance between the two groups would normalize premiums and deductibles and make insurance affordable for everyone. However, this didn’t work, and those living under non-government-subsidized insurance plans were met with increased premiums because healthy people usually don’t require government-assisted health insurance, because they’re conventionally on private or employer-provided insurance plans.

My mom, being both a nurse and a taxpayer, has a rather strong opinion when it comes to the subject of healthcare. She’s in favor of the government’s assistance in funding certain insurance plans for the elderly and needy, such as Medicaid or Medicare, but not so much as to have to lose up to almost 50% of her annual income in Obamacare excise taxes, Medicare taxes, Medicaid taxes, Social Security taxes, on top of the already-expensive federal income tax, state income tax, and other taxes, or having the premiums and deductibles on her own employer-provided insurance plans jacked up despite her being completely healthy. Many others even lost their insurance plans because they simply became unaffordable.

And therein lies the ultimate issue: government-sponsored insurance requires more healthy people paying for health insurance to ensure that premiums, copayments, deductibles, whatever, will remain affordable so that the maximum number of Americans can live healthy, financially-stable lives. Without healthy Americans in the buyer pool, premiums for private insurance plans will go up, which will eventually lead to insurance becoming unaffordable.

The Republicans’ replacement for the ACA’s individual mandate was essentially a punishment for buying insurance after you become sick, which is solving the problem after it happens instead of preventing it in the first place. According to the New York Times, the AHCA would, due t o the previously mentioned flat tax credit system, push out older Americans. A health care plan that aims to lower premiums and deductibles at the expense of the elderly is unethical and un-American.

The research branch of credit agency Standard and Poor’s Global projected that up to ten million individuals could have lost health insurance under the American health Care Act due to the American Health Care Act’s pitiful efforts toward maintaining this precious balance. A nonpartisan study by the U.S. Congressional Budget Office estimated that under the AHCA, 24 million people would’ve lost coverage over the next ten years.

While I concede that the Affordable Care Act wasn’t perfect, it was an admirable step toward universal health care and an effective auxiliary in bettering the health of Americans. However, I also believe that the AFA should have been improved, not repealed and replaced. Like the ACA with “Obamacare,” I would like to assign a nickname to the Republicans’ detrimental health care plan, or attempt at such: “The American Health Scare Act of 2017.”