The girls diving team has competitors headed to the regional competition 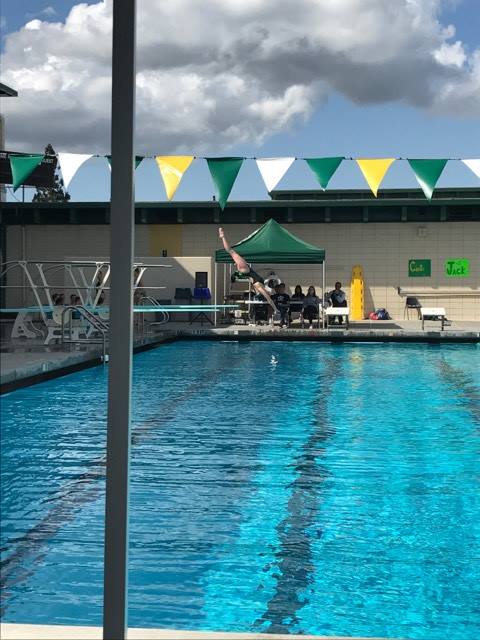 Varsity Captain Junior Anna Dupin does a back dive pike at the meet last Tuesday. Dupin has been diving for five and a half years and qualified for CCS.

The girls varsity divers who qualified for CCS are looking forward to the meet on May 12. Diving may be an individual sport, but they all work together to improve their skills for meets. So far only three girls, varsity captain junior Anna Dupin, freshman Shannon Johnson Guthrie and sophomore Jessy Chen have qualified for CCS.

The season is technically over for the divers who did not qualify for CCS, but divers may still show up to practice to support the rest of the team, freshman Sonya Bonne said.

“There are seven judges [at CCS meets] instead of two and it’s just a more competitive environment,” Bonne said.

Johnson Guthrie dove for a club team for a few months before trying out this year as a freshman. She said she was excited to make it to CCS on varsity, as she was expecting to be put on JV. She said her favorite dive is the reverse somersault.

“[In CCS] you have a lot more dives and the judging is a little tougher,” Guthrie said.

Dupin, one of the other divers who qualified, has dove every year at HHS and for five and a half years through a club team at Stanford. She said she competes with 11 different dives one meter board and 11 on three meter board.

“I just like being with the group and making friends. It’s fun,” Dupin said.

The diving team typically has practices 5 days a week after school where divers sit in a “hot tub,” which is a kiddie pool filled with warm water in between dives that Bonne said she enjoys going to.

“Yeah it’s super fun and the environments really supportive and the people are really nice, so yeah I like it,” Bonne said.

Bonne had been diving since the beginning of the season and had also done waterpolo. She will dive again next year as the team has never had cuts. Tryouts next year are for boys and girls and there is no prior experience required.