The Denome’s Advocate: America needs to turn red – but not Republican 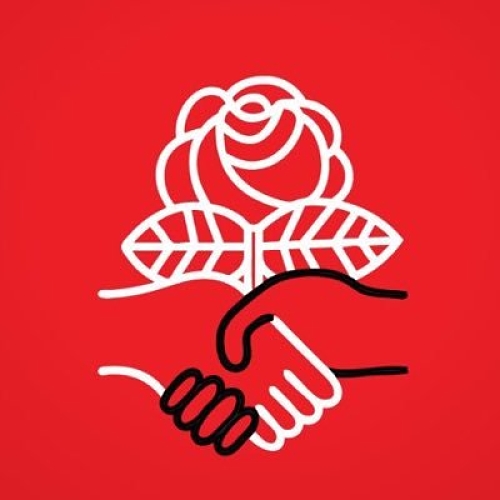 The Democratic Socialists of America has been at the head of America's socialist tide. Photo courtesy of Wikipedia.

For the past few decades, America’s favorite punching bag has been socialism and its twisted younger brother, communism. The McCarthyist tide in the 1950s, during which fearful Americans reported their neighbors as communists, was only the start of a larger trend of bashing state-run economies and fighting unnecessary wars to remove them.

The fear of socialism continues today. In 2015, a poll by Gallup showed that only 47 percent of Americans would vote for a socialist for president, compared with 50 percent who wouldn’t.

Yet in the 2016 election, socialist candidate Bernie Sanders, nearly won the Democratic Party nomination. Later, his opponent, Hillary Clinton, ran on a leftist platform influenced by Sanders and won almost 4 million more votes in the general election than her opponent.

Clinton is far from being a socialist. But it’s becoming clearer with every wave of elections that socialism is no longer quite the dirty word is once was.

Now, full disclosure: I am a dues-paying member of the Democratic Socialists of America (DSA) and supported Sanders in the primaries. With that being said, there is every reason for American voters to reconsider their thoughts on socialism and its role in American government.

Currently, American politics follow a very worrying trend. Consistently, both Republicans and Democrats, while with differing methods, put profit over the good of the people. That’s simply how capitalist society works. Even mainstream Democrats, members of the party of liberal social and economic policies, still reject ideas like a single-payer health care system, on the grounds that it would simply not work with America’s economy. Hillary Clinton herself said that single-payer health care “will never, ever happen.”

Well, Clinton will never, ever be president. Maybe she should reconsider prioritizing the profit of private hospitals and insurance companies over the well-being of millions of low-income Americans and seniors.

Single-payer health care, the idea that taxes collected by the government will fund coverage for every citizen in a nation, is a shining example of the war between socialism and capitalism. In our current system, companies literally profit off life or death scenarios. As an extreme example, cancer drugs can cost over $10,000 a month. In single-payer, however, people are not just the material inserted into a figurative machine that produces dollars; they are the sole reason the entire system exists.

This people vs. profit mindset is slowly coming to light more and more in America. Health care is far from the only issue with a socialist solution. Student loan debt is the direct result a system where colleges prey on American students. Universal free public college would remove profit from and reinsert people into the equation. Climate change, described by Sanders as “the single greatest threat facing our planet,” is fueled by for-profit oil companies having free rein over large swaths of the environment. An energy economy that’s run for the good of the people and not so Rex Tillerson and his pals can buy another yacht will save millions of lives.

That’s what Americans say they won’t vote for. Policies that stop the powerful from steamrolling the poor and instead provide for the general welfare of the population. Anyone who argues against socialism because it “costs too much” or “stomps on our liberties” is indirectly responsible for more suffering. You cannot put a price on anyone, not even a single human.

Americans may just willfully be living in ignorance. Some may understand this situation  and still disagree. While that is aggravating, it is also the right of the people to their own opinions. However, understanding how capitalism has caused problems in America, acknowledging the need for change and then proceeding to do nothing is not going to solve anything. Someone like that is not a socialist, but a neoliberal.

After all, for the amount of attention given to the splitting of the Republican Party, Democrats also have their own factional war going on. There are two sides; one composed of progressives, who either have socialist sympathies or outright socialist policy. Senators like Elizabeth Warren (D-MA), who supported Sanders’ single-payer plan from last month, or Brian Schatz (D-HI), who has his own similar proposal that allows anyone to buy into Medicaid, fall under this category.

The other side are the neoliberals. Nobody symbolizes this role better than House Minority Leader Nancy Pelosi, who did not support Sanders’ plan or a similar effort in the House. It’s important to note, however, that Pelosi is from San Francisco and her supporting leftist policy like universal health care would win her votes, not lose them.

Pelosi underscores everything wrong with moderate Democrats. They argue for liberal economics and social liberty, but stop short of actually addressing the root problem. In what may or may not (it’s may) correlate to this moderate Democrats like Clinton often have their campaign coffers filled by big banks, big insurance, big oil and of coursebig tech. According to OpenSecrets, Clinton herself raised about a fourth of her total money from outside contributions, via dark-money organizations like her SuperPAC. Sanders, by comparison, funded his entire campaign with small donations.

Is a party split likely? Not very. Even though reactionaries on the right are itching to separate from the mainstream Republicans, they fear a Democratic supermajority arising from a divided right. Socialists likely have the same fears. In an ironic fashion, the powerful are yet again stomping on the weak in America.

Thus, we are at an impasse as of right now. A third party is not viable. Americans are in need of an education on the socialist system. Until then, the strong will continue to destroy the weak, one unpayable debt at a time.

Think of that as a call to action. https://dsausa.nationbuilder.com/join