Behind the scenes of “The Servant of Two Masters”

A look at stage craft’s involvement with the upcoming play 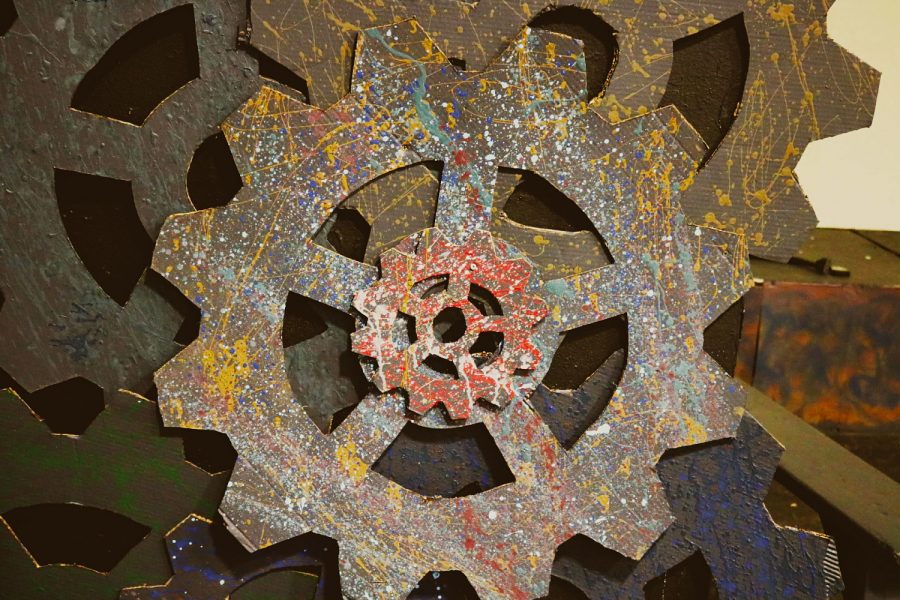 By Avalon Allen and Zachary Hayes

he Drama department performs many plays each year, and their next one is right around the corner.

Written by Carlo Goldoni in 1746, “The Servant of two Masters” is a classic comedy that recounts the events of a particularly hungry servant, Truffaldino. The servant finds himself in an awkward predicament as he becomes the servant of, you guessed it, two masters!

The plot thickens though as it is revealed that his masters both hate each other. Truffaldino struggles through the play to try and fulfill both of their needs as well as satiate his own lust for food.

Of course a good play is nothing without a good cast. Luckily, HHS has an experienced Drama class that is just right for the job. The head of drama and teacher of stagecraft, Leslie Lloyd, even chose the play based on some of the talent that they knew were going to be in the play.

When asked about the main style of the play, Lloyd revealed using a creative choice considering the time period the original work was set in,

The stage is already taking on a steampunk theme, with rusty cogs positioned in the front, covered in splattered paint to create its aging texture.

Lloyd showed no fear over her cast or her stagecraft crew being unable to meet the demands of theatre production, even complimenting her talented carpenters in 5th period.

“I have this one kid whose uncle was an incredible carpenter in Mexico. He apprenticed him. So now he’s beyond anything I would ever hope for even as an adult because his skills are so good.” said Lloyd.

She also mentioned Jackson Leuenberger, a gifted electrician in his sophomore year of high school.

Despite their talented cast, there are some difficulties of managing stagecraft that they can’t ease. The most prominent one being the dilemma of organizing two separate classes that work at different speeds to create one final scenery for the play.

At the start of every stagecraft class, all students are given an opportunity to try everything through a survey that allows them to volunteer their specific skills. After a testing period busied with basic painting and building, the class is split into various crews that include lights, building, painting, props and costume.

With these separate crews are also specific roles of the class, such as Cianna Bruce’s job as stage manager, helping with organization and administration. Sounds and lighting managers deal with the sound effects, music, spotlights and more.

Lloyd’s own role is one of the most hectic ones. Not only does she supervise, she also does some of the labor herself. She personally enjoys to help out in painting and sawing, while finding cleaning to be the hardest thing to do for stagecraft.

“It’s a lot of work because you have to get ready, and then clean up everyday. Everyday. And sometimes, the clean up is a lot harder than others,” Lloyd said.

Both Bruce and Lloyd agree that stagecraft is hard work, requiring lots of time, dedication and focus. However, both are passionate about their jobs, considering the benefits of it to outweigh the cons.

“My favorite thing about stagecraft is the number of kids that are affected by it … and learn a skill that’s something that is apart of a vocation,” Lloyd said.