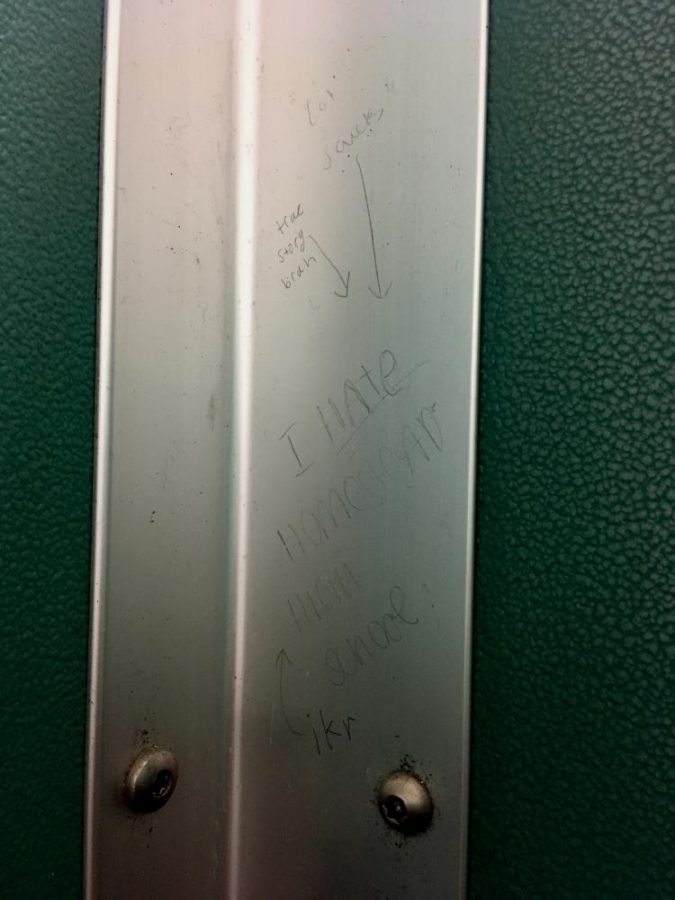 S
ituated in the girl’s bathroom of the lower B Building, “I Hate Homestead” is often misinterpreted as a commonplace defacement.

This is not the case. Rather, “Homestead” is a high-brow form of conceptual art that offers a classic take on the trials facing modern secondary school students.

Admittedly, the piece mirrors the appearance of vandalism in many respects. It’s simplistic, illicit writing on a wall. However, by giving the appearance of graffiti, “I Hate Homestead” taps into the very fundamentals of the high school experience.

“Homestead’s” location in a high school bathroom strikes at the core of the teenage existence. In the bathroom, teens escape the confines of society and school. Lavatories serve as a vehicle for adolescent rebellion and autonomy. Makeup, gossip, gender roles, an obsession with exterior appearance, ditching class and restroom graffiti are all central to both the stereotypical teenage experience and the bathroom.

In “Homestead”, the artist’s simplistic scrawl and elementary terminology throw the typecasting of adolescents in modern society into question. While coming of age is a complex, individualistic process, teens are often pigeonholed by themselves, their peers and society. “Homestead’s” use of casual writing parodies this simplistic notion of the American teenager.

The use of graphite as opposed to traditional ink in “Homestead” emphasizes the transitory nature of the high school experience. Adolescence, like a pencil, is inherently temporary. Feelings that seem important during young adulthood, like those vocalized in “Homestead,” are ultimately fleeting.

Adolescence is difficult for everyone. “Homestead” captures how people can be drawn together in the turmoil of teenhood. Similarly, the use of abbreviations like “lol” and “ikr” illustrate the vital role young people play in moving society forward. From creating new slang like “true story bruh” to rebelling against existing authority with bathroom graffiti, teenagers shape culture.

Although “Homestead” offers a strong stance on adolescence, its message lacks originality. Just watch any teen movie; the idea that young adulthood is both superficial and necessary is widely explored. Although “Homestead” reiterates these themes from an original perspective, it fails to represent the teenage experience in a new light.

While brilliantly executed from a technical sense, “Homestead” conveys a tired message. By taking on a visage similar to stereotypical high school graffiti, it provides a slightly satirical outlook on the complicated, transitory and fundamentally individual journey that is adolescence.

“I Hate Homestead” offers a clear, time-honored message from a unique conceptual perspective. However, it lacks the complexity and thematic originality to truly resonate with viewers.