Band marches through the Rose Parade 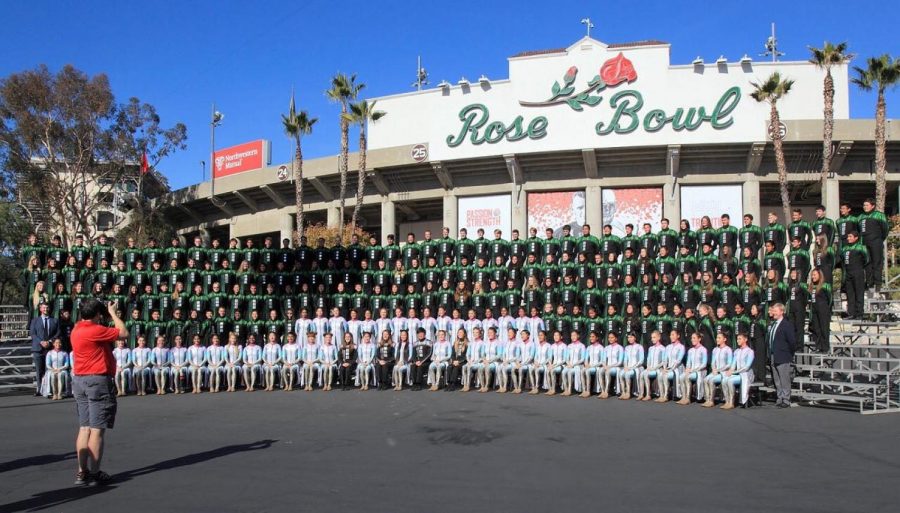 By Harley Anderson and Brandon Welty

The marching band made their first appearance at the 129th Rose Parade in Pasadena, CA, on Jan. 1.

Along with performing at the parade, the band also took part in the parade’s theme “Making a Difference” by performing for the children at Shriners Hospital in Pasadena. Copies of senior Amanda Sun’s coloring book, titled “love,” were passed out. Donations from the book would go to kids at the hospital, according to the FUHSD homepage.

The band was one of twenty schools chosen to perform during the parade, and the 72nd act to perform. The selected bands were notified 15 months before the actual parade so they could raise funds for the trip, according to the Tournament of Roses website.

Hailey Guthery, a freshman on the color guard said: “Many of us had little to no sleep that weekend, but we woke up ready for the parade.”

Guthery said one of her highlights was when they completed one of her favorites, the ‘California Dreamin’ and ‘Shut Up and Dance’ mashup.

While the march came to an end, many people on the sides of the streets would encourage them by telling them the amount of distance they had left to march,  Guthery said.

“It was a fun experience, and although the distance seemed a lot, it wasn’t that bad. It was a once-in-a-lifetime opportunity,” Guthery said.

Caleb Lille, a sophomore on the drum line, said that he almost underestimated the nearly 7 million people along the side of the streets.

“By the end, it not only felt like you had walked five and a half miles, it also felt like you had also done just one mile at the same time,” Lille said. “Time passed by way too fast. Every time you’ve re-done a song, you really lose track of where you are, and you kinda just try to enjoy the ride.”

The marching band and the spectators in Pasadena weren’t the only people excited about the Rose Parade. Senior Alannah Wilson was one of many who tuned in to watch the parade from her own home.

According to Wilson, the only thing she knew about the parade, other than the fact that the band would be performing, was that it’s a big deal nationwide. The main reason behind her watching the parade this year had to do with the band taking part in it.

The Rose Parade has been going on for over 100 years, and although this is the first time HHS has performed, they leave behind a legacy that will last for many years to come.