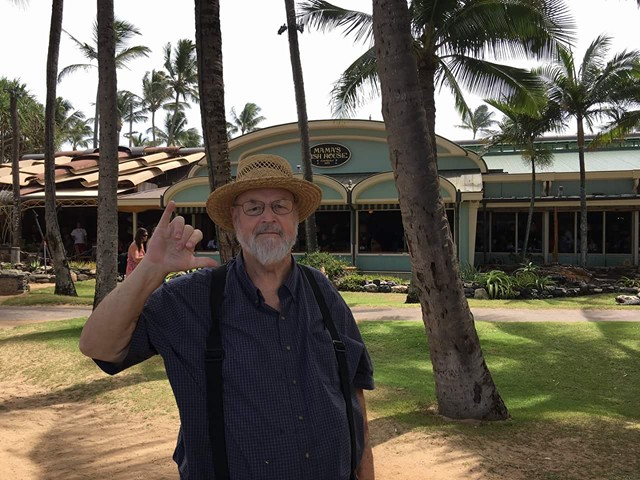 Bob Peck is remembered for his wit and connection with students of all types through students and staff at HHS, according to teacher Marjie Fischer.

Former FUHSD teacher Bob Peck passed away on Jan. 30 after a battle with cancer. Peck is remembered by students and staff for his humorous personality and ability to connect with students, as well as for volunteering his time to audio and visual related activities in most events on campus.

Peck was born on July 10, 1946 in Baltimore, MD. His family then settled in Saratoga, where Peck attended and graduated from Saratoga High School, according to a Facebook statement posted by his family. Peck then enlisted in the army, where he served in Korea as a first lieutenant, and later graduated from Menlo College with a Bachelor of Science.

Peck worked many hands-on jobs before teaching, such as wood carving and electrical work, according to teacher Marjie Fischer. He eventually became a teacher at HHS and other Bay Area schools, teaching career technical education electives that were designed to provide students with an opportunity to explore potential job options.

Peck taught the film, TV and video class and developed daily video announcements on campus. Aside from that, he volunteered in working on audio and visual displays for football games at Mustang Field and made sure the graduation live feed was up and streaming for the community.

Teacher Edmond Kwong knew Peck through collaboration in teaching career technical education electives and became friends through their similar interests in video and photography. Kwong recounted Peck’s ability to connect with students that had trouble relating to peers or adults.

“ … he [did] have a very very personal soft side of him,” Kwong said. “I know because I’d always admired how he reached some of the students that are hard to reach. He could reach difficult students better than anybody I know, certainly better than me.”

Kwong also described him as someone who was very straightforward and was honest with his opinions and perspective.

“He didn’t say anything he doesn’t need just to make you feel better, so I appreciate that,” Kwong said.

Former HHS student David Gelovani remembered Peck as having a contagious laugh and a sense of humor. He recalled hearing stories from his friends about Peck and the influence he made on them. Paraeducator Marjie Fischer also recognized Peck’s humor and wit.

“He was always very positive and happy, I mean he really was … he had just a really great sense of humor and [he was] a great storyteller,” Fischer said.

Fischer met Peck through special education students and other students who took Peck’s class and later got to know his wife through her job as well. She recalls the inspiration Peck gave kids to do many things instead of being so specialized in one thing.

“He [was] always filming,” Fischer said. “You see why film and TV became his love because it was his love and his passion because he was able to teach kids what you can have when you combine your passion and the things you love doing and parlay that into a career.”

Peck taught at HHS for five years and left in 2014 after a career of teaching and much more. Not long after that, Peck was diagnosed with cancer and passed away on Jan. 30 at age 71, according to his family. A memorial was held at Saratoga Federated Church on Feb. 5 for family, friends and colleagues. Peck is survived by his wife, Julia, his four children and three grandchildren.