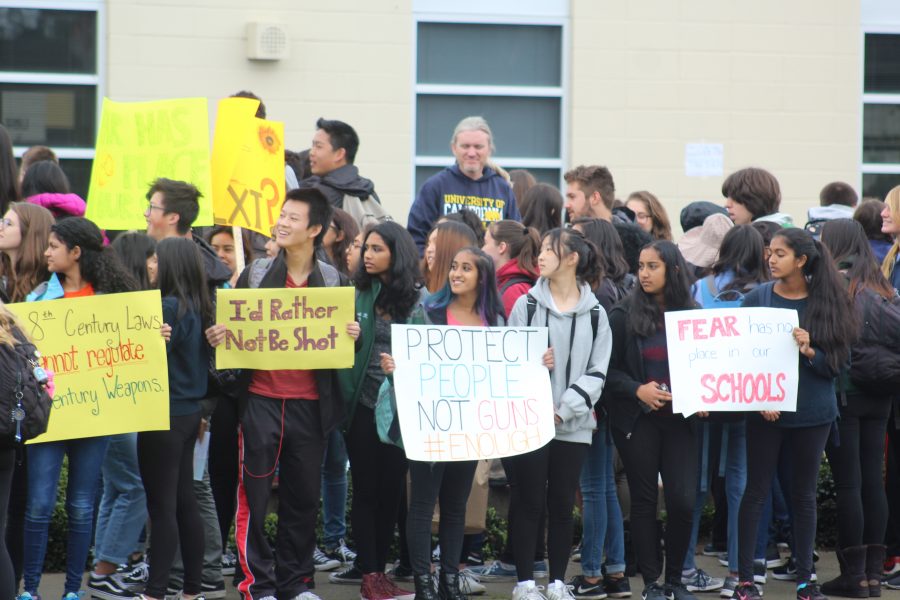 The walk out continued on after the 17 minutes, as students walked to FHS and to city hall.

By Harley Anderson and Renee Wang

“Something needs to be done,” sophomore Ellora Lasker said. Lasker was one of many students who participated in the National School Walkout in the wake of the recurring mass shootings.

The nationwide protest, with goals to invoke change in the current gun laws, was slated to last 17 minutes long, each minute accounting for every victim of the Parkland school shooting. The HHS walkout started as a Facebook event created by sophomores Shama Tawakol and Romy Bornstein.

“My family’s from Egypt and I go there every summer … [people ask] is it safe going there, but if you look at the statistics there is a higher chance of being killed here at school than walking the streets of Egypt,” Tawakol said. “If my walking out of class for 17 minutes can do anything to change it, then [that is what I will do].”

At 10 a.m., students gathered in the Horseshoe, some wearing orange and holding signs to show solidarity with the Marjory Stoneman Douglas High School shooting victims. As the walkout extended past the duration of brunch, and for some the duration of their fourth periods, students were marked tardy or absent to class.

Some students returned to their fourth period classes following the end of the 17 minutes, while others continued to march. Despite harsh weather conditions, senior Lavender Payne and her friends led the extended walkout to Sunnyvale city hall. Payne said they had not originally planned to extend the march, but felt as though 17 minutes “was not enough,” and wanted to create a larger impact.

Juniors Charles Crane and Namiko Turner said the two got in contact with Mayor Glenn Hendricks as they thought going to city hall was a good idea.

“Once Cianna Burse got the group moving, we ran from the back to the front, and I thought that we should make this something by going to city hall, so I called the mayor,” Crane said.

Turner said she considered the overall walkout to be a success, since many students continued on with the march, and were able to listen to each other’s voices. The chance for people to get together allowed for not only the students to see that their voices could be heard, but also adults and city officials as well.

“And when we finally got there, everyone stood there and listened to what was being said, with high energy,” Turner said.

At city hall, students from HHS, FHS and De Anza gathered together to hear what the mayor had to say. He spoke about what the city of Sunnyvale is already doing, in terms of laws for gun control. Then he let students who led the group to city hall give short statements on why they took part in the walkout and what they want to see changed, not just in Sunnyvale, or California, but in the rest of the country.

“On the media, the government and adults seem to think the youth does not know what they are talking about,” Payne said. “… In reality, we are the ones living through it. Education is important … if we come to school to learn, we should be able to learn in a safe environment,” Payne said.

According to Principal Greg Giglio, students are allowed to exercise their First Amendment rights during school hours without fear of punishment, as per the 1969 Supreme Court ruling. This statement was reiterated by a districtwide email sent out by Superintendent Polly Bove. Giglio said punishment would only incur should a student be disruptive.

Teachers supervised the walkout along with students to ensure safety. Giglio said teachers were allowed to wear clothing to show their support for said cause, but could not explicitly participate in the march alongside students.

“I think it’s great students are walking out and standing up for what they believe in and pressuring legislators to make changes,” history teacher Andrea Yee said.