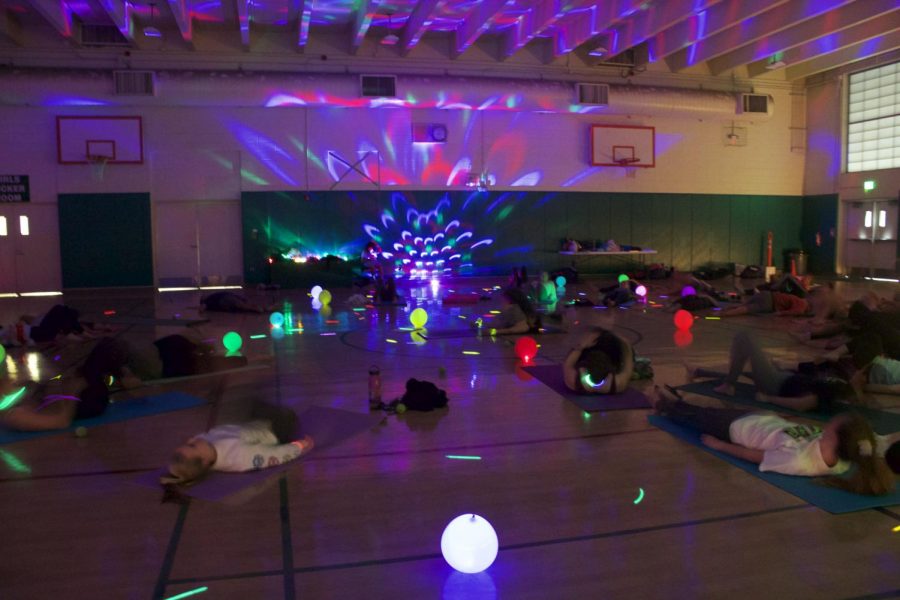 Club officer Aya Snell said it is fun to the decorate and create a fun, colorful atmosphere. Photo by Alfonso Pitco III

The Yoga and Fitness club hosted its biannual Glowga Night on Friday where the small gym was lit up with glow sticks and disco lights as students and adults stretched in numerous poses. It is the club’s biggest event and is meant to be a relaxing, stress-relieving experience for everyone, club president Zhi-Ying Chua said.

“In general, it’s to help students destress and give them an hour of time where they can just be themselves and be free from their worries,” Chua said.

The session was led by French teacher and club advisor Kelly Ronsheimer, who said she is a certified yoga instructor.

“I did Glowga two years ago as my project to get my certification,” Ronsheimer said, “and I did a donation to a place called Cancer CAREpoint because I had stage III cancer, and that was one of the non-profit organizations I really wanted to give back [to].”

What makes Glowga different from their usual yoga sessions is the glow-in-the-dark theme, Chua said.

“It helps people feel more comfortable. At our regular yoga sessions, we turn the lights off but here it gives the event a whole different atmosphere. Especially because of the lights, It feels almost magical,” Chua said.

By the end of the night, Junior Marin Pomeroy said she enjoyed the night and was a time for her to relax and focus more on herself.

“I wanted to get more relaxation in my life because my life is really busy right now…” Pomeroy said. “It helps you disconnect from all of the craziness in the real world and get back to yourself.”