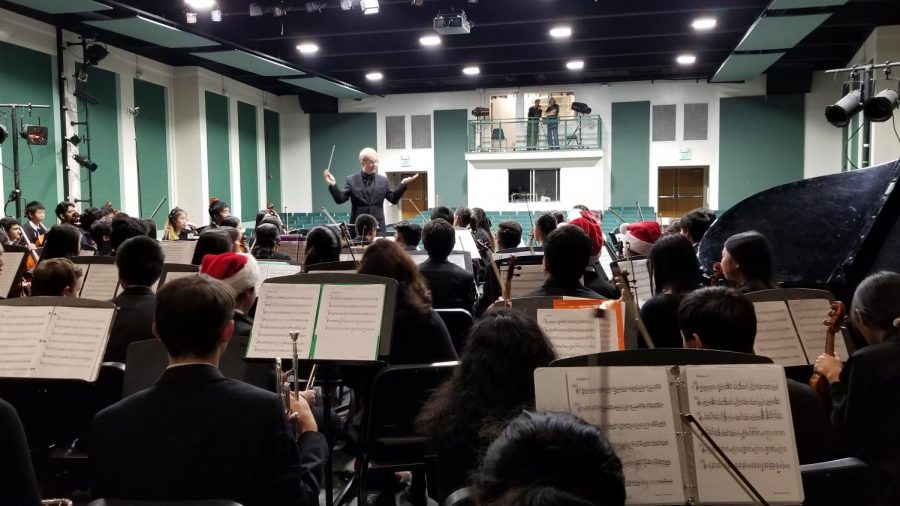 Students from CHS played with the HHS orchestra for combined pieces. Photo by Steven Lefaive.

rchestra had their annual holiday concert before holiday break and audience members were given a chance to see what they have been working on during first semester. The concert combined Homestead and Cupertino orchestras, as well as a selection in band — french horns and percussion to name a few.

For some musicians, preparing for a concert includes coping with internal emotions, sophomore Kiarra Ning said.

“A few hours before the concert, you have to sorta just stop. Don’t even look at your instrument, don’t even touch your instrument,” Ning said. “You calm down, you think of something else, you get your mind off of it. You go in with what you learned.”

Other preparations are made  more technically through pure practice and repetition. Practice for orchestra students entails working with their section, a group of people who play the same instrument, senior Terisa Woo said

“I’ve been doing sectionals at lunch with my section. We also have mandatory tutorials on Wednesdays. Of course, there’s in class stuff, and we have a group chat that we communicate a lot with outside of class,” Woo said.

Practice also includes working as an entire orchestra, and learning how to fit in as an individual, violist Ning said,

“Individually, you would go home, practice the part you have trouble with, break it down,” Ning said. “Then, at the end, we come together at rehearsal to see how it fits together.”

Junior Sabrina Kim said she focuses on enjoying the performance instead of worrying about how they play.

“When you’re performing in front of others, you don’t wanna mess up, but I think part of performing is learning that people don’t really care that much. They care more that you are enjoying yourself on stage rather than getting the notes right,” Kim said.

The students in orchestra make the class out to be a family, helping each other with the nervousness that comes with performing, Ning said.

“When I was a freshman, I remember that I was always super nervous going into the concerts,” senior Sean Chen said, “but the more and more we performed, there’s nothing really to be nervous about because we’re all in it together.”